McGill's Road to Nationals Part 2: Eye of the beholder

Blue skies in Calgary, an homage to a pioneer, and an analyst's defense of the "eye test."

Share All sharing options for: McGill's Road to Nationals Part 2: Eye of the beholder

With two crisp practices already in the books, the McGill Martlets are getting set for their opening matchup against the hometown favorite Calgary Dinos at 7PM (9PM Eastern Time) on Thursday night. 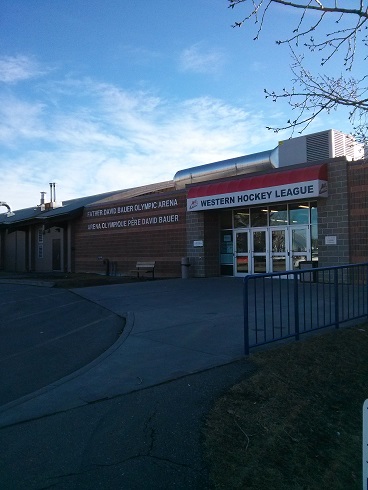 While the players are getting dressed to the nines for Wednesday night's opening ceremonies, I took advantage of the city's unusually mild weather to change into a t-shirt and go for a run.

On the campus of the University of Calgary and just a block away from McMahon Stadium, the home of the CFL's Calgary Stampeders, sits a two-pad facility housing one of the few international-sized hockey rinks in Canada. The 200 feet by 100 feet surface at Father David Bauer Arena was named after the creator of Canada's National Team program, one of the greatest advocate for amateur sports the country has ever known.

While Father Bauer's project never achieved international success in the traditional sense, overshadowed by the dominant Soviet hockey program and by Team USA's 1980 Miracle on Ice on the Olympic stage, it did much to promote the idea that young hockey players need not choose between getting an education and honing their games at the highest possible level.

Father Bauer passed on exactly a quarter-century ago, but his spirit lives on in every single team present at the CIS National Championships this week. As our Head Coach Peter Smith once said to a prospective Martlet recruit:

"You probably won't play in the NHL and we can't promise that you'll win a national title every year that you are here. But what we can promise is that you will get a great education, and that you will graduate from one of the best universities in the world."

Now, for something completely different:

"What analytics taught me is your eyes and your mind are lying sons of b*****s in the worst absolute way." - Maple Leafs Assistant GM Kyle Dubas, speaking about cognitive biases in anaylsis at the Sloan Sports Analytics Conference

As someone whose business is to watch a ton of hockey, both live an on screen, I would have to disagree with Dubas on this count.

The way I see it (pun not intended), the video camera is an imperfect way to capture information. Imperfect in other ways than our eyes and our minds, to be sure, but imperfect nonetheless. Considering that the human eye can detect information at a rate upwards of 500 frames per second, watching a video replay recorded by a 60 FPS camera means that you are probably missing something important on a regular basis.

Don't get me wrong, having access to a quality and a quantity of video footage is a must for any elite hockey program wishing to remain a step ahead, and counting things such as shot attempts and zone entries is infinitely easier on video than live (after all, no one has yet to figure out a "pause" or a "rewind" button for real life). However, in my mind, there is no substitute to actually being at ice level and getting a "feel" for the pace of a game, the intensity of a player, or the split-second decisions which separate the best from the rest.

Yes, having a camera standing beside you so that you can go over that information in another way later on is the ideal situation. Neither method is a complete substitute for the other. In any case, our natural visual machinery and subconscious mind is incredibly powerful in ways that we can't explain, so calling it a "lying SOB" is perhaps a mild oversight at best, and a dangerous blind spot at worst.

Watch our next game online here