What are the Canadiens' trade deadline needs?

With just over a week to the trade deadline, it's time to examine what the Canadiens need to be successful going forward.

Share All sharing options for: What are the Canadiens' trade deadline needs?

Marc Bergevin's job never gets any easier, but he has made it more difficult on himself this season by making several poor moves in the offseason, leading to a disappointingly up and down season from the Montreal Canadiens.

Operating on the assumption that Bergevin wants to make the team better, over the next week we'll be delving into possible trade targets, but for now we're going to examine what the needs are of the Montreal Canadiens, and what they can afford to part with to fill those needs. 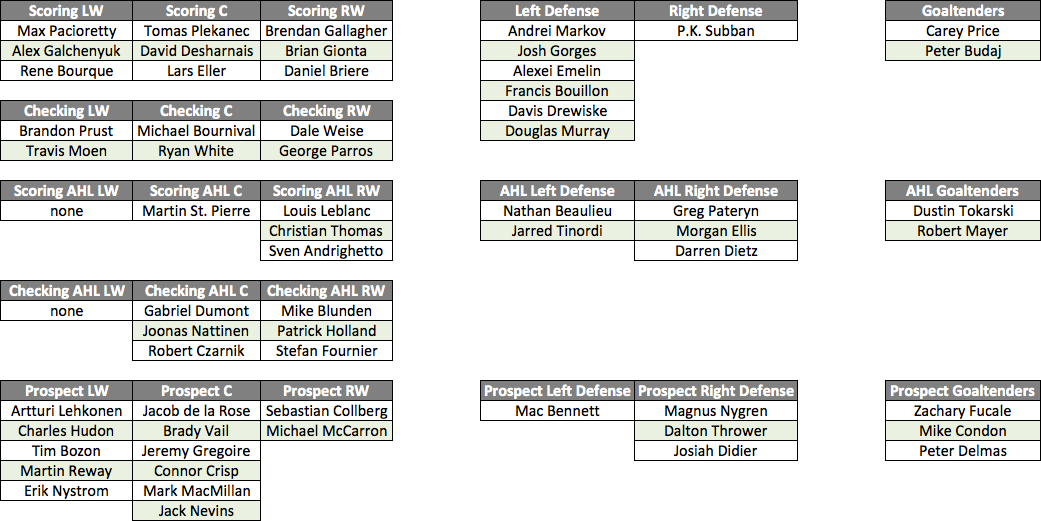 One thing that is very apparent is that the Montreal Canadiens' strengths in their system are very lopsided by age. The AHL ready forwards who are possible call ups are all right wingers, whereas their prospects outside the pro ranks, especially the skilled players, are most left wingers.

On defense there is a similar problem, with just one right handed defenseman at the NHL level, and the two most talented AHL level defensemen both being left handed. Josh Gorges and Alexei Emelin have both displayed the ability to play the right side, but both are better on their natural sides. Nathan Beaulieu has also shown an ability to play his off side, albeit in a small sample.

With the Canadiens having enough roster players to create two functional fourth lines, don't listen to anyone who tells you that they need to add grit. Six different guys who play fourth line minutes is already way too much to carry for a team in the salary cap era.

Michael Bournival has displayed an ability to play as a scoring left winger, if the Canadiens are willing to use him that way, but all indications from the last several months tell us that Michel Therrien doesn't view that as a good option.

With the struggles Rene Bourque has had, and the complete lack of depth on the left side, a scoring left winger is definitely something the Canadiens could be in the market for. Most likely they will be looking for a player who has some size, and can pop in between 15-20 goals per 82 games. The need for a left winger becomes even more apparent if Alex Galchenyuk is ready to shift to center, which would make David Desharnais expendable.

The other major need for the Canadiens is right side defense, with only P.K. Subban holding down the fort well on that side of the ice. A top-4 level defenseman would likely be difficult and expensive to acquire, but if the Canadiens were able to do so, it would make them much stronger throughout the lineup.

Marc Bergevin has said many times that he doesn't believe in trading players that will create a hole in his lineup, so we have to assume that he will trade from a position of strength.

No single one of any of these categories has a lot of value to accomplish what Marc Bergevin needs to do, but it's very possible that he could make an attractive package out of these players, especially if he's willing to include draft picks. If Bergevin truly wants to make a splash, one of Sebastian Collberg, Artturi Lehkonen, Charles Hudon, Tim Bozon, or Martin Reway could fetch serious return, but so could veterans like Josh Gorges or Travis Moen, if Bergevin is ready to go with youth at those positions.