As we approach the anticipated and likely disappointing Trade Deadline Wednesday, here is some closure on the EOTP posts of the past few days, at least as I see it.

This was going to be a post solely about the possibility of the Habs repatriating another lost son, but as I've pondered the idea over the past few hours, I've decided to expand it into more of an overview of my coverage, and a look at what to expect come April 3rd.

But first, the one we call Cammy.

The former King, turned Flame, turned Canadien, turned Flame once again, struggled somewhat out west last year upon his sudden acquisition. He was forced into a number of roles with a struggling Flames team, and the numbers just weren't there. But this year, things seem to have taken a turn for the better - both for Cammalleri and his swap-mate, Rene Bourque.

Here is my Q&A with Matchsticks and Gasoline editor Justin Azevedo. I will also say that as I went to link this to their site, I came upon some outstanding coverage and reflection following the Jarome Iginla trade, and I highly recommend you all check it out. This is a tough and emotional time for Calgary fans, and it's great reading about the influence that Iggy had on that city. Anyway...

Me: Without having followed the Flames closely, since he was acquired it has seemed like Cammalleri has been tossed around the lineup, playing both centre and wing. What has been his most common role, and how has he performed, especially lately?

Justin: Cammalleri has been shifted around the lineup, but that's been more out of necessity than anything - the Flames are suffering from a severe lack of NHL-level centres. Up until the Iginla trade he'd been splitting time pretty evenly at both positions but will likely spend more time on the wing moving forward. In terms of performance, he's never really been a tough-minutes guy, so the results on that end have been similar to his other Calgary years. His offensive output has increased with the normalization of his shooting percentage - he's about a .8 PPG player at this point.

Me: With one year, and a $6 million cap hit left on his contract, what are the chances Feaster decides to move him at the deadline?

Justin: If I were the GM of the Flames, I'd move him. Not because he's been underwhelming, but because with enough salary retention you could get a pretty good price on the trade market. Because of the absurdity of the past two years, I no longer have a gauge on the management of the Flames - so I would be equally surprised either way. A 2nd line winger at three million for one more season is something pretty much any team would take.

Me: What do you think it would cost for a team like the Canadiens to re-acquire his services?

Justin: Really depends on the financial structure of any trade. If the Flames don't retain any salary, past moves tell me that a 1st round/ 2 2nd round picks would be the average return. If the Flames retain salary, they might want an [elite] prospect and a 3rd or 1st and 2nd. I don't believe they want or need any roster players at this point.

Thanks to Justin for the responses, and check out his rant against Flames management especially. If there's one reason to deal with them now, it's that Feaster and co. might not be around much longer. Gauthier might be able to lose a deal with Feaster, but I'd hope Bergevin wouldn't.

So, Mike Cammalleri. I'll start with the positives. Unlike Gaborik, Smid, and Jagr, it actually seems highly plausibly he moves in the next few days. This isn't because I have any inside knowledge on the topic, it's because by all accounts the Flames are "sellers", and it makes sense for them to move a forward with a large salary for assets. We all know Cammalleri well, so I won't spend long talking about what he could bring to this team. He knows the team, he knows Montreal, and he is a proven playoff performer - unlike some of those other guys, although as I've previously illustrated playoff labels can be deceiving. Cammalleri is very much an exploitation forward at this point in his career, but he has proven that he can perform well in that role. He is by no means a washed up player, as is proven by his 25 points in 30 games and his encouraging possession stats against secondary competition. He has past chemistry with Tomas Plekanec, but a role on the left of Lars Eller or even Desharnais, if he were to swap with Pacioretty, might be ideal for him, and could push the team over the top.

Now for the negatives (or "reservations"). I'll start with the more outrageous one. Some people believe that Mike Cammalleri is a "me first" player because of his comments prior to his trade last year regarding the team playing like losers. I don't see this as a poor attitude, I see it as a player who was rightfully frustrated by his own and his team's seasons, and who spoke up about it because, frankly, he didn't know what else was left to do. I believe - or at least I would hope - that his trade had nothing to do with those comments, and neither should it have any impact on the potential of re-acquiring him.

The biggest reservation most should have about this deal is the contract. Cammalleri has a cap-hit of $6 million this year (inconsequential) and next (more consequential). Now the Habs aren't exactly a cap-strapped team, but having his salary on the books for next year could pose problems. Here's why:

As it stands, the Canadiens have approximately $6.75 million in cap space for next year. Factor in an obvious amnesty buy-out of Tomas Kaberle and that number increases to about $11 million. With that money, the team has to sign: two forwards and a backup goalie, plus any extras. That's not absurd. Presuming a backup goalie would cost about $1 million (Budaj makes 1.15 currently) and a depth forward or two like an Armstrong, Halpern, White, or a youngster would cost 1-2 million at most, that leaves about $8 million to play with. Now the team may want to re-sign Michael Ryder, but may not feel it has to if his price is driven up too high on the open market. So looking at it in the most basic way, the team would be faced with an either/or situation with Ryder and Cammalleri, although to rid themselves of Cammy at that point he would have to be traded.

Of course, this would mean he would cost significantly more. There's no way of knowing exactly what a guy like Feaster would ask for in either scenario, but I would think a $6 million Cammalleri might cost the Canadiens' 2nd round pick, and a $3 million one might cost the team's 1st rounder and a 3rd or a mediocre prospect. I could be completely off base with this, but that's just my feeling.

So that is that. The Canadiens would have to give up a first round pick and maybe a little more - although keep in mind that's been the rumored asking price for Ryane Clowe - but would get a guy who has thrived in the playoffs with Montreal before, that the fans love, and that could slot in nicely anywhere in the top 9. Oh, and unlike Clowe he has scored a goal this year.

So now that that's on the table, I'll say that as much as I like the idea of this move relative to what else is out there, I'm doubtful that Bergevin would do it. Reason #1 might be that even with a $3 million cap hit next year, Cammy would leave the team with less cap flexibility than Bergevin seems to like. Reason #2 could be that he wants a bigger player, although I hope that unlike a lot of the rest of Montreal, he doesn't favor size just for the sake of size, because that mentality is what has led to the downfall of teams like the Sabres. Reason #3 would be that he only wants a rental, although based on his comments in the past I doubt he'd be that closed-minded. And finally, reason #4, which could ultimately de-rail all of this, is that Rene Bourque is almost ready to return, meaning that the top-9 is already pretty set. In that case, I doubt he would pull the trigger on any big trades. In case you're interested, here is a player usage chart of all of the big names on the trading block, to see how they've been used and how well they've succeeded so far this year. For those unfamiliar with the concept, the circles represent the player's Corsi rating, with a big blue circle being the highest (which is good) and a big red circle being the lowest (which is bad). 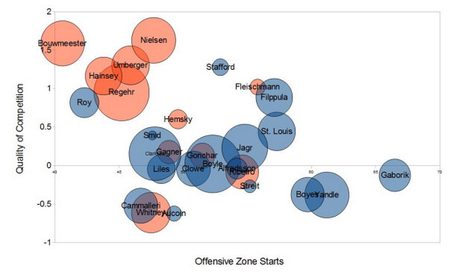 As you can see, while he has faced below-average competition, Cammalleri has performed well with tough zone starts, something he might see if playing with a Lars Eller.

Ultimately, I believe that Bergevin appreciates what he has in Trevor Timmins, and won't give up prospects and picks unless he really feels it's a deal he has to make. My personal belief is that a trade like the one I outlined for Cammalleri would be right on that fence. I don't, however, believe that a guy like Clowe makes this team much better.

We'll see what happens come April 2nd. Maybe the group we have now will be the group that skates onto the ice in game one of the playoffs. But maybe, just maybe, there will be one more familiar face among the group, whose first stay in Montreal ended a little too soon.