2018 Montreal Canadiens Top 25 Under 25: A Difference of Opinion — EOTP staff vs. community

Our votes often differed from those of our readers, with the third overall pick in the draft being one subject of heated debate.

Share All sharing options for: 2018 Montreal Canadiens Top 25 Under 25: A Difference of Opinion — EOTP staff vs. community

In 2018, our Top 25 Under 25 was determined by 14 ballots: 11 from members of the EOTP staff, two individual lists from selected commenters, and one ballot that was the averaged result of 391 members of the community.

While opinions between the staff members and the community were similar on many players — 15 of the top 20 saw a difference of two positions or fewer — there were quite a few fairly significant differences for some players. This article will look at those for whom there is a different perception in their standing with the organization.

For the comparison, the 11 staff ballots were averaged into one, while our two community representatives, joepocket and canadianboy12345, were returned to the proletariat to make the community rank a 393-ballot average.

The actual voting averages are shown in parentheses in the table below. You can click on a heading to sort by that column, while clicking a player’s name takes you to the player’s T25U25 profile.

With the net addition of six players to the ballot from the previous year, there was plenty of room for differences in the rankings. We discuss some of the most significant below, starting with the team’s most recent first-round selection.

Montreal’s dreadful season at least came with the silver lining of a high position for the 2018 NHL Entry Draft. After a year of awful luck for some of their offensive players, they finally had some go their way at the draft lottery, moving up from fourth to third.

The pick was used to deviate slightly from the consensus prospect ranks, as Montreal opted to select a talented Finn who showed a lot of aptitude for the centre position despite playing the Liiga season on the wing. Kotkaniemi had risen in stature in the weeks leading up the draft, partly because of an exceptional Under-18 World Championship performance, and perhaps equally due to being one of the few players available who showed the potential to become a top-line centre. 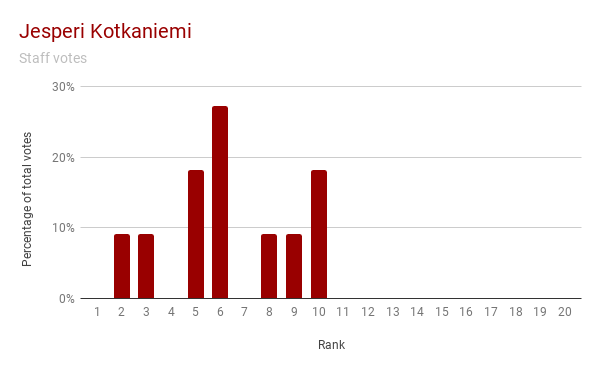 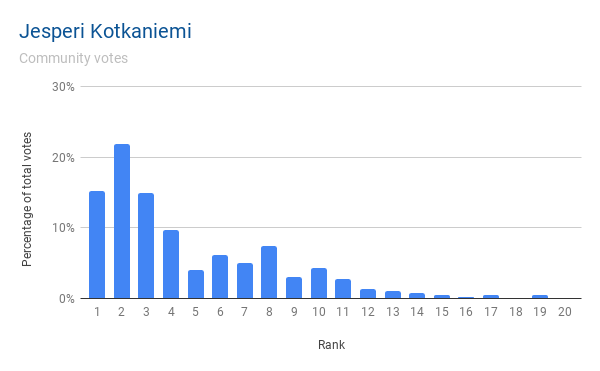 Despite his high selection, only two of us gave him a spot in the top three, and just four had him as a top-five player. Readers votes were much more heavily skewed to the top positions, as more than 50% of the ballots had him ranked third or higher, and over 15% had him ranked as the top player under 25 in the organization.

I would have thought he would have ended up higher than #6. — Stefan70

I’m really high on Kotkaniemi, but how can you put him ahead of proven NHL talents? — sbrobbson

Kotkaniemi has a lot development ahead of him to claim the role he was drafted to step into. As a European prospect drafted in the first round, there are several paths open to him for this upcoming season, whether he goes back to play in Finland, begins his North American career with the Laval Rocket in the AHL, or breaks through all expectations to crack the Canadiens roster as an 18-year-old.

I think most who took part in the voting believe he will become an NHL player; very few votes fell outside of the top-10 range. While the staff believes he needs to prove he’s one of the top players the Canadiens have, the community has no qualms about such a description.

Bitten has a seemingly unlimited pool of energy to draw upon, and it makes him nearly impossible to deal with in the offensive zone. His speed gets him to loose pucks first and past opposing defences with ease. His hands are just as good, as he sets up teammates with passes that are right on their tape.

Nearly everything he does is executed better than many of the prospects in the Canadiens’ system. But the offence just hasn’t been there to match the effort. 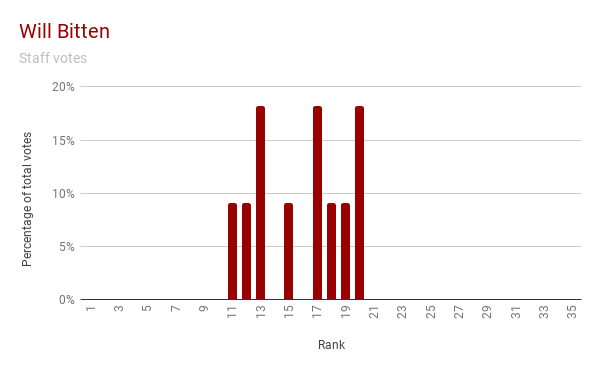 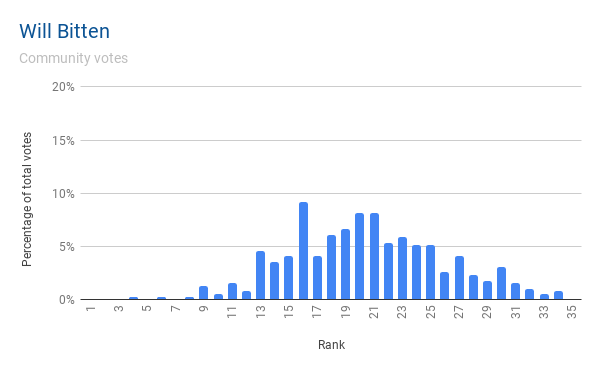 Those of us on the staff believe that the offence will eventually come; he plays too solid of an overall game for pucks to not start bouncing his way. After several seasons without that really happening, readers are less convinced that that breakout is on the horizon.

The six-position difference between our placement and the readers’ is one of the largest, though there are several instances of a discrepancy of that many places or more this summer.

I had him at 14. I am very curious to see how he does in his first year pro. - be yours to hold it high

I think he’ll surprise more than a few of us. — DRaydB

Bitten will leave his Junior career behind for AHL hockey this year, and his game should translate well despite the increase in competition level he will face. He will still be one of the faster players on the ice, and a trustworthy option for Joël Bouchard as the coach himself makes the adjustment to the professional level.

A debate about the potential of Joni Ikonen versus that of first-round selection Ryan Poehling defined our Top 25 Under 25 last year. Showing some promise of becoming a top-six offensive talent, some of us placed Ikonen ahead on our lists.

The skilled Finn’s 2017-18 season didn’t just fail to live up to the hype, it may have been one of the most disappointing seasons from a Canadiens prospect in quite some time. After a point-per-game performance in Sweden’s U20 league, and bettering that in international competition in his draft year, he showed little of his offensive flair in the 2018 World Junior Hockey Championship and made little impact on the scoresheet in his debut season in Liiga. 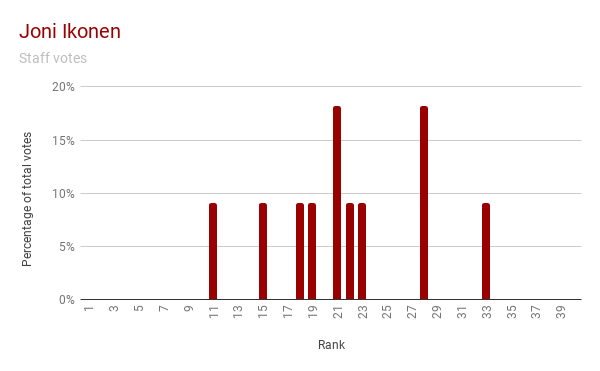 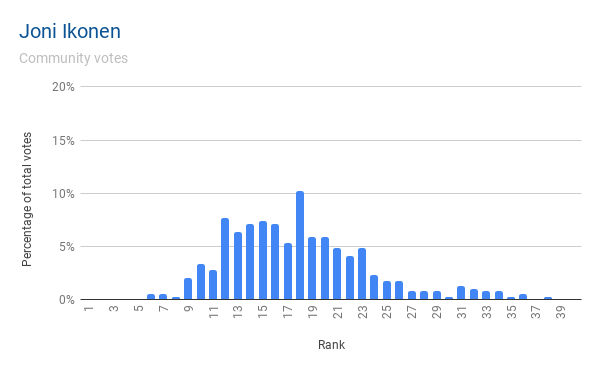 Partly because of that, and likely also an overcompensation for having him above Poehling last year, the staff had Ikonen much lower in 2018. Our position dropped from 10th in 2017 to 21st this year.

The readers were less influenced by his poor season, as his rank at 15th on the community ballot was just two spots lower than the 13th place he was granted in his series debut. There’s still quite a bit of faith that his offensive potential is intact, with last season’s performance just a speed bump on his development path.

If everything goes right, this guy can challenge for a top-line spot. — alex_pl

I just don’t have a lot of faith that he will make it to the NHL. — third generation haber

He did show progress as the season went on, playing his best hockey at the end of the 2017-18 campaign. Unfortunately, the road turned bumpy once again with an off-season knee injury requiring surgery that will delay his start to the upcoming year. Joining the action with players up to their full speed will be a challenge, but there should be plenty of time for Ikonen to find the level he’s shown to be capable of.

There’s a mould that has been used to make Swedish centres over the past several years. While the defencemen from the country tend to have all-around ability, the forwards are usually strong in defensive aspects of the game but lacking in offensive finish.

Olofsson is another centre who has that defensive acumen, but with more of a promise for point-production. He ranked third in goals and fifth in points for a Timrå team that fought its way to promotion from Allsvenskan to the SHL last season. 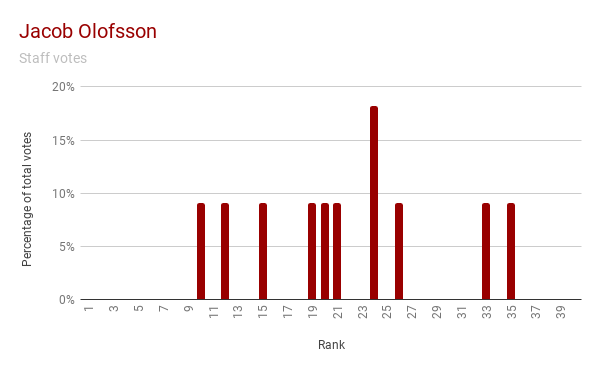 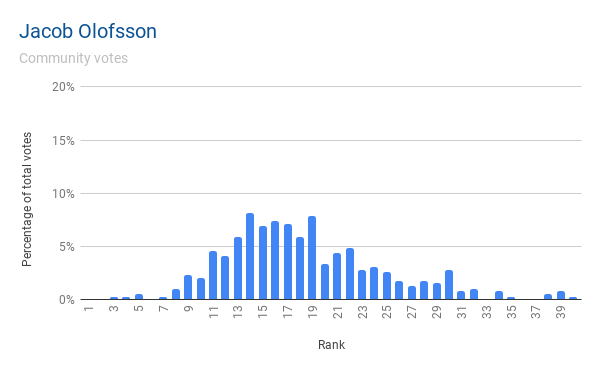 Most of us had Olofsson among our top 25 players, even if it was mostly just inside the cutoff. The community was more confident in the ability of the late second-rounder to hit his ceiling, with his distribuion of votes peaking around the 16th position. There was still some uncertainty in his value among commenters, with votes trailing off steadily into the high 30s, but the general opinion was higher than what those of us on the staff had of him.

Olofsson could be the prize catch of the 2018 draft for Montreal. — 24 Cups

I ranked him the highest of our second-rounders, even above Ylönen, because I like the upside. — HFX-HabFan

...[H]is skating concerns me because you don’t see NHLers perfoming that well with that sort of skating. — Dave the hab

Patrik Bexell has been attempting to cool the expectations for Olofsson this season, as his team will be hard-pressed to hang on to its position in Sweden’s top league, but you can still expect him to be a significant factor for the club in its quest to avoid relegation. Patrik will keep you abreast of all the setbacks and progressions over the course of the season in the weekly European Prospect Report.

No player has generated more controversy than Brett Lernout in this project’s history. It all began back in 2014 when he finished 30th, and hit a boiling point when he missed the cut for the Top 25 the next year by just one place. He had, however, risen up the ranks consistently since his draft year.

Time in the NHL in each of the past three years has only served to widen the range of opinion on his value. Some have been left unimpressed by what he’s shown in the professional ranks, others still hold out hope that the top-level abilities he possesses will all come together into a cohesive whole that will allow him to reach his potential. 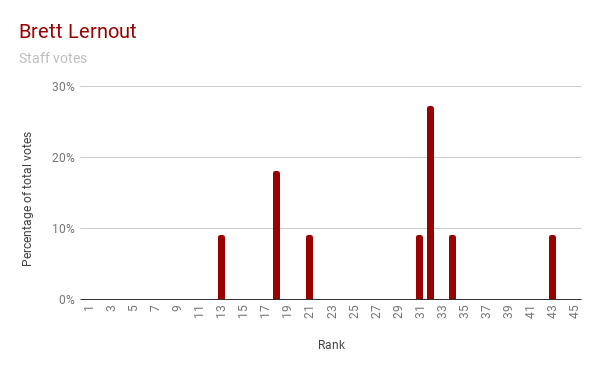 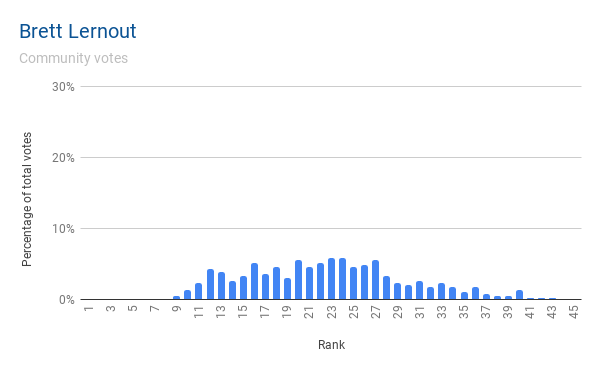 The range of votes was quite similar between the writers and the readers, though the community positioning was more heavily skewed toward the higher end, resulting in the largest gap between how high the EOTP vote was (#21) and where we had him (#28).

I’m not the biggest fan myself and I definitely had him out of my top 25. — Cfunk89

The kid clearly seems to have the natural ability and size to potentially have some kind of impact at the NHL level. — #webernation

I had him at 27. It’s crazy how polarizing this guy still is after all these years. — DRaydB

You’re #1 in my heart Brett — VinceHABS

I mentioned in his profile how he had a major opportunity last year to get comfortable in his own game. With a significant injury to Shea Weber at the NHL level and a coach renowned for his development abilities now at the helm in Laval, 2018-19 may be an even greater chance for him to solidify himself within the organization. The opening weeks should tell us a lot about his future with the organization.

A fifth-round pick in 2017, expectations were quite low that Jarret Tyszka would develop into a key prospect for the Canadiens. He has decent size, and had posted respectable offensive totals in his draft year; his second season in the WHL.

This year we got to see his strong transition game and his confidence when in possession of the puck. After scoring at better than a half-point-per-game pace with the Seattle Thunderbirds, he took part in the Canadiens’ development camp shortly after the 2018 draft, and was one of the better defenders in game action. 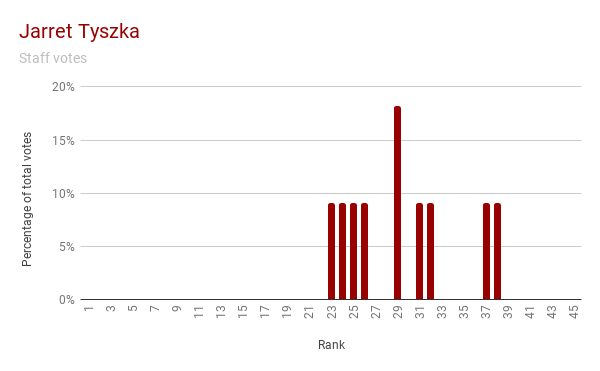 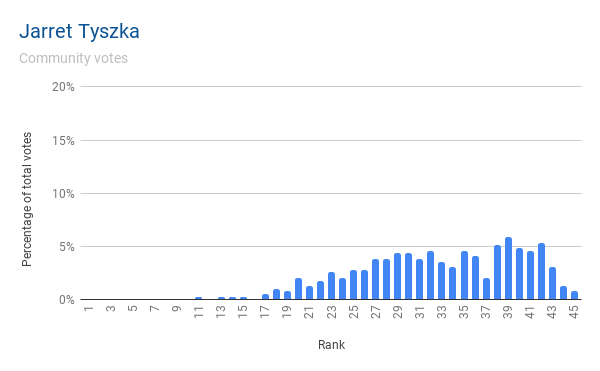 While the majority of votes from both the staff and the community centred around the rank of 30 or so, close to where he ultimately ended up, the normal curve for his votes from the community is heavy on the back end, perhaps the result of many people not being overly familiar with him, and therefore leaving him among the lowest ranks of their ballots.

I’m optimistic that he will have a big year rushing the puck. — third generation haber

Reality for me is he would probably rank between 35 and 40 but mainly because of his injuries and not having seen enough of him. — luckypete1972

As the panellist who had Tyszka the highest, at #23, I believe he’s going to make a big impression in his final year at the Junior level. David St-Louis (who ranked him at #24) will be keeping a close eye on Tyszka’s development, and that of the rest of the many prospects playing in North America, in this year’s meaty edition(s) of our Catching The Torch series.