We didn’t all agree on this year’s rankings, and that includes the battle for #1.

Share All sharing options for: Canadiens 2017 Top 25 Under 25: A Difference of Opinion — EOTP staff vs. community

Our Top 25 Under 25 was determined by 24 ballots in 2017: 21 members of the EOTP staff, two individual commenters, and one ballot that was the averaged result of 526 responses from members of the community.

There was a fair bit of consensus between the writers and the readers, and also some fairly significant differences for some players. This article will look at those for whom there is a different perception in their standing with the organization.

For the comparison, the 21 staff ballots were averaged into one, while the two individual ballots from members Naslund26 and Silvertip were added to the community pool to make it a 528-ballot average.

An important note on the official rankings: the placement calculations were made by removing the highest and lowest vote a player received (only one if it there were multiple cases of the same extreme), so they aren’t simply the average of the 24 votes received. That explains why some players may seem higher or lower than where they should be based on the average results (actual voting average is shown in parentheses) in the table below.

Click on a heading to sort by that column. Clicking a player takes you to his T25U25 profile.

The quirk of the ranking procedure is most apparent in Brett Lernout’s case. Ranked 17th by the staff and 15th by the community, he actually finished at 18th when the high and low votes for each player were removed. There was very little to separate him, Simon Bourque, and Jeremiah Addison in the battle for 17th place.

There was a slight difference in how the two sides voted for Lernout, but it was far from the most notable. So let’s discuss the ones that were.

Alex Galchenyuk started out on this list at #3 in 2012, and had held the #1 position for three years heading into the off-season. The decision to place him at #1 was a unanimous one in 2014, with Brendan Gallagher posing a light challenge to him the last two years but never really threatening to dethrone the former third-overal pick.

Things heated up on that front in mid-June when the Canadiens acquired another young offensive talent in the form of Jonathan Drouin. The team now had two players who’d shown glimpses of a future among the NHL’s top point-producers, though they had very different — but, intriguingly, complementary — approaches to generating offence.

The finisher was joined by a playmaker, both with 50-plus-point seasons on their resume, both far from reaching the peak of their abilities. It made for a tough choice for the top spot on the list.

For the staff, there was some support for Drouin claiming the title as the top player under 25, but in the end it was about a four-to-one decision that Galchenyuk would stay at #1, with Drouin a clear #2. The two players didn’t rank anywhere but those two spots on our ballots. 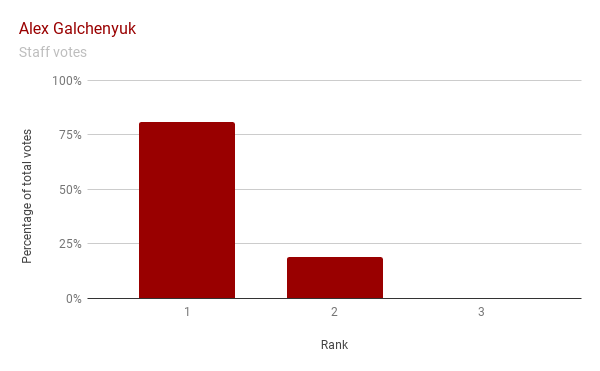 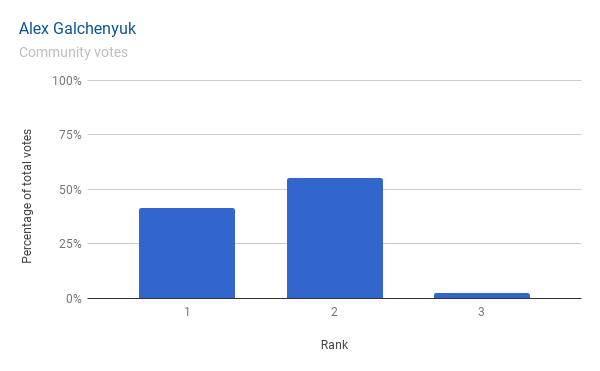 Whether it was his track record being slightly more impressive than Drouin’s, with one 30-goal season under his belt already, or simply the familiarity with the long-time Habs player, knowing how he fit in with the other players on the team, the ultimate decision was that Galchenyuk is the better player at this particular time.

“Galchenyuk's worst enemy is himself.” — The JD Man

“He has shown he can do it, now put it all together for a full year and lets watch some magic happen!” — Hudson19

The community vote was also clearly in favour of one player, but opted to place the new addition at the top. There was about a 60-40 split, with Drouin knocking Galchenyuk off the top of the hill. 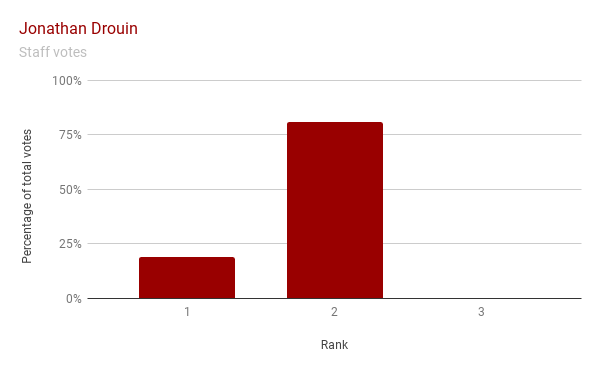 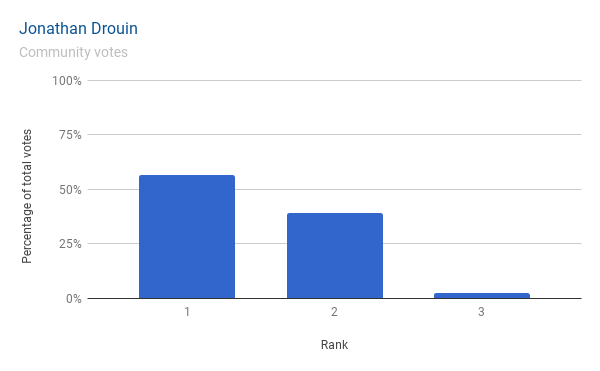 The former Tampa Bay Lightning player also received some votes farther down the list with the only real significant position being #3, with about 2% of the ballots slotting him there. For Galchenyuk the percentage of third-place votes was slightly higher, at 3%.

Of the combined 25 ballots that placed one of either Galchenyuk or Drouin at #3, the vast majority had Artturi Lehkonen in one of the top two places, with a handful placing Phillip Danault higher.

“Kid has superstar written all over him.” — Naslund26

“I’m not ready to anoint him as The Chosen One yet.” — punkster

For members, the general opinion is that Drouin is the more impactful player, or at least that he has the higher ceiling. He has shown some excellent speed and incredible hands in his short professional career so far, and when they combine he can create some of the best highlights of any player in the NHL.

“Agree with #2 [for Drouin]. I feel that Galchenyuk has accomplished more at this stage.” — Roch

“I can't believe Drouin's not #1. I don’t think Tampa would’ve accepted a trade of Drouin for Galchenyuk.” — sbrobbson

Should they both be with the team at this time next summer (and it would be almost cruel to rob fans of seeing them play together after an off-season spent on the same team), the results may be different from what they were for 2017.

Scherbak has been highly regarded since being drafted in 2014. He made the list at #6 that season and had been no lower before dropping to #7 this time around.

The EOTP staff members still have hope that he can become an NHL player, and have him as one of the first players outside of a fairly clearly defined top five. Most of his votes fell between five and 10, with an overall position at sixth. 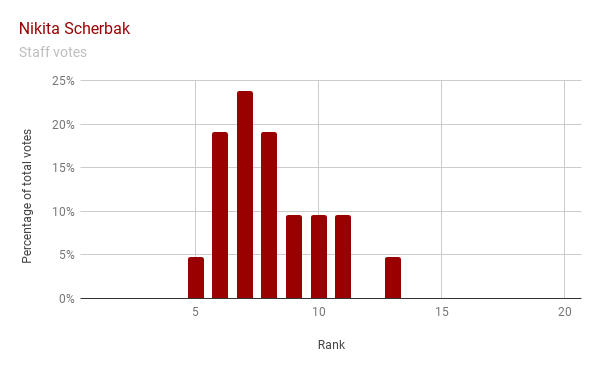 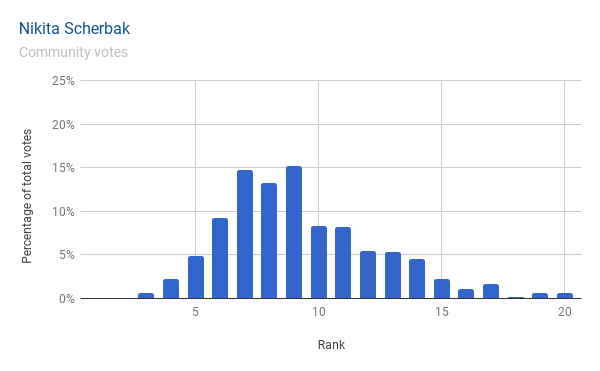 Many community members placed him in a similar position, but there is a sizable percentage who have him ranked outside of the top 10. The result is a placement at ninth, with Charlie Lindgren, Noah Juulsen, and Michael McCarron all above him.

“I still have high hopes for Scherbak. If he finds a way to put it all together – watch out.” — DRaydB

“...[T]his is his big year to prove that he can play consistently, and be defensively responsible. I’m going to be losing hope in his Habs future if he doesn’t take a step forward in these areas.” — sbrobbson

There’s no doubt his stock will begin to slip if he doesn’t begin realizing the potential he was drafted on. For our members, it seems that downward trend has already begun.

The Canadiens used two of their first three picks in the 2017 NHL Entry Draft to select centres, and both cracked the top 15 this year.

Ryan Poehling (25th overall) and Joni Ikonen (58th) are very different players, playing on oppositie sides of the Atlantic, with very different skill sets, and on different paths to what they hope will be an NHL future.

As soon as Ikonen was selected on day two of the draft, the debate began over which of he and Poehling had the best shot at a successful NHL future. Poehling was seen more as an all-around player while Ikonen impressed with his offensive capabilities.

For the 21 staff members, a slight edge went to Ikonen, with 12 of us placing the Finnish playmaker above Poehling. Ikonen’s ceiling is thought to be higher than that of the Canadiens’ first-round selection.

It was a bit of a bimodal distribution, with a sizable proportion of us believing he could have been as high as eighth, but a larger group had him around the 11th position where he eventually ended up. 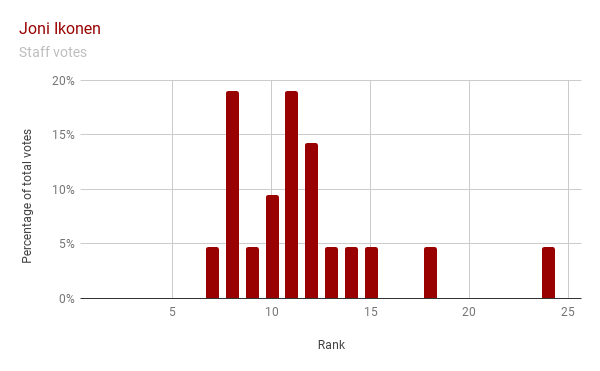 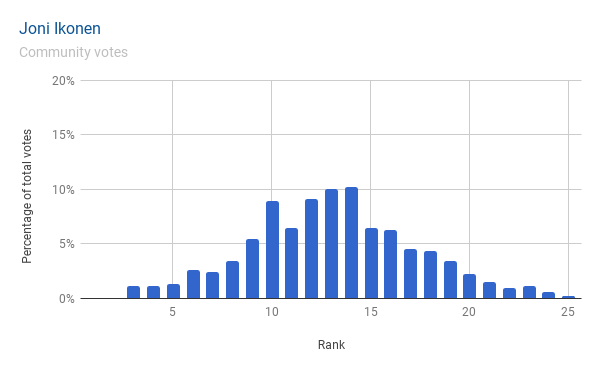 The community wasn’t quite so high on Ikonen, with just 156 ballots having him above his NCAA counterpart. There was some of that bimodality we saw in the staff votes, with a bit of a peak around 10, but the main one landed at about 14th.

That pattern was repeated in Poehling’s staff chart, with a good percentage believing he should be ranked 10th, but the overal position ending up a few spots lower. 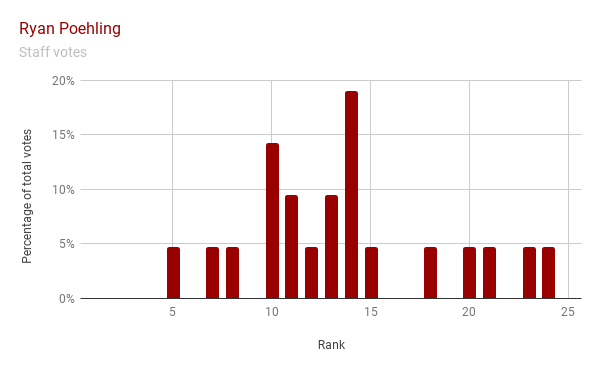 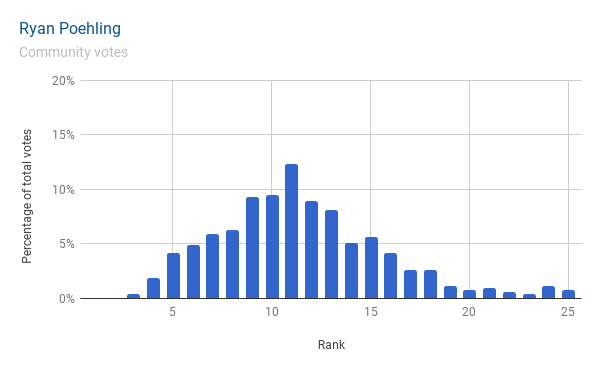 The community votes were distributed fairly normally around a central point of 11th for Poehling.

“What’s not to like? Impressive resume at such a young age!” — TeddyMac

“...[R]ight now he hasn’t shown us anything. IMO I see him as a potential third-line centre in four years if we don’t lose him as another unsigned UFA.” — Hab at Heart

The end result is opposite viewpoints on where the two players should rank. We had Ikonen several positions above Poehling and just outside the top 10, while the community had them switched in just about the same positions.

“I’m glad Ikonen is ranked ahead of [Poehling]. I didn’t think the voters would have the guts to do it.” — Habs72

“Your rankings, and voters, are basically saying that they are more accurate than all 31 NHL scouting departments.” — Mercury1010

We may debate which player is the better prospect for several years, but the main takeaway is that the Canadiens added two quality players to what had been a fairly shallow position in the prospect pool. With Ikonen and Poehling joined in the rankings by defencemen Cale Fleury and Josh Brook, it was a good 2017 draft for Montreal.

Evans has made consistent progress in his game since joining the University of Note Dame in 2014. He’s gone from a one-dimensional playmaker to a solid two-way centreman who does well in all three zones.

He has steadily risen up the ranks as a result, making his first appearance among the top 25 in 2016 before ranking #16 this year.

A quarter of the staff votes fell on that 16th place with the majority between that position and 20th place. 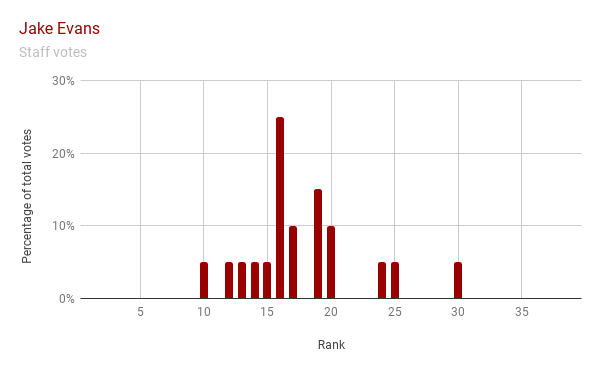 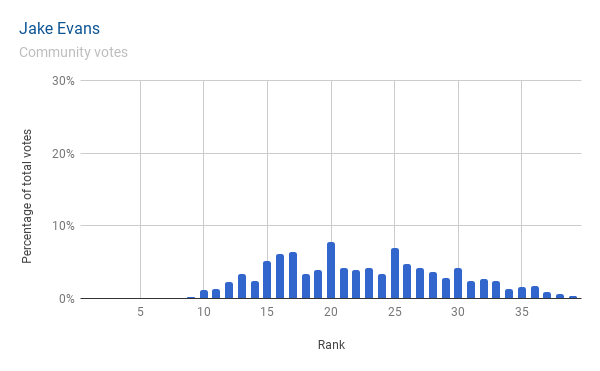 There wasn’t really a consensus of any sort from the community, and his histogram looks more like a rolling plain than a mountain. The average ended up at 21 from the membership vote.

“I think Evans is the most underrated prospect that the Habs have.” — Habby4Life

“He’s one of those players I like among his peers, but I’m worried about his ability to translate to the NHL level.” — Silvertip

This was the prospect with the biggest discrepancy between how highly the writers placed him and where the community vote worked out. Come this time next year, I believe he will end up a lot closer to my vote at #10 than the community placement at #21.

The Canadiens made a trade for a seventh-round pick for the purpose of selecting Primeau. The Habs’ scouting staff obviously liked what he had, and gave up a pick in the next year’s draft in order to grab him. Given their track record for finding young goaltenders, you have to think there is some real promise there.

Primeau has yet to start his collegiate career, and will likely need a year or two in the AHL if he proves to have a shot at a professional future afterward.

Given his distance from making the Canadiens roster and the fact that there are several other quality netminders ahead of him, the 15 EOTP staff members who ranked him had him near the bottom of the 2017 prospect list, ultimately placing him 36th of the 39 candidates. 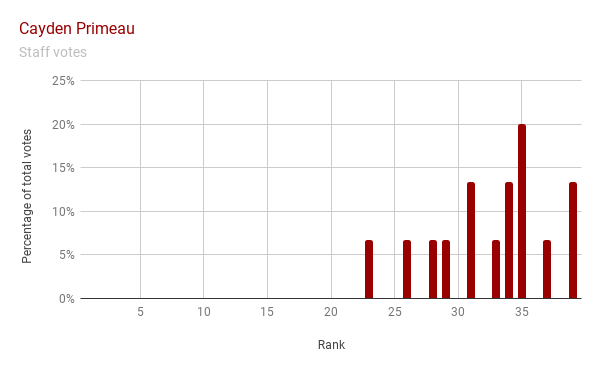 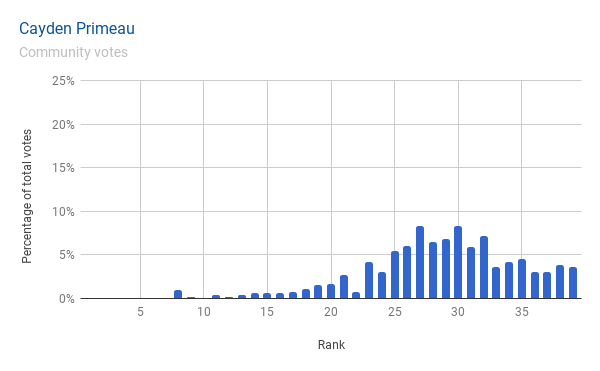 The community was a bit more bullish on their ranking of him, with votes going from a blip at #8 to #39, with a few votes at nearly every place in between. The result was a spot at #30, ahead of Hayden Hawkey (31st) and just four positions behind Zachary Fucale (26th).

“I think Primeau has the chance to be much higher on the list next year. The Habs have a knack for finding goalies and based on rankings, Primeau was a steal at where we got him. I had him at 30.” — Habby4Life

How those three netminders rank relative to one another next year (assuming Fucale is still around) will be something to watch as there seems to be a bit of a battle brewing among them.