Alex Galchenyuk is among the Habs most dynamic offensive threats. But can he take his game to the next level in 2015-16?

The number one question heading into the Montreal Canadiens' 2015-16 NHL season is a familiar one: "Will Alex Galchenyuk play centre?"

If you asked Marc Bergevin and Michel Therrien, they'd give you the same answer: It's up to Alex.

With the season around the corner, we know one thing for certain, this year Galchenyuk tops the Canadiens' Top 25 Under 25 charts. He's a repeat T25U25 gold medalist, and still has three years to burn on his eligibility.

While Galchenyuk has established himself as an NHLer, there is still of plenty room to grow. He's coming off an impressive year, with 20 goals and 26 assists through 80 games. But most of those games were spent on the wing. Tapping into Galchenyuk's point-per-game potential rests on his ability to transition into a bona fide NHL center.

Scott's first place vote for Gallagher over Galchenyuk is the sole digression from an otherwise unanimous decision. Galchenyuk's skill is unquestionable, but there are certainly some areas of the ice where Gallagher comes out on top. The Habs are well-poised for the future with both players on the roster.

This is Galchenyuk's second straight year at number one, a streak he'll be able to extend over the next three years. At only 21 years old, it will be tough for teammates to usurp Glachenyuk's claim to the top spot. The only prospect under 25 with the upside to do it is Nikita Scherbak, but you have to think his NHL success will come playing alongside Galchenyuk in the not-too-distant future.

Galchenyuk earned the third-overall spot in 2012, moving to second in 2013, and ultimately took over the top spot last year.

The first thing that comes to mind when discussing Galchenyuk is creativity and skill; two things the Canadiens sorely need in their lineup. Galchenyuk has skill to spare, and has left many goalies second-guessing themselves. While we're still waiting for him to undress opposing defencemen on a nightly basis, the talent is definitely there.

He has a particularly strong wrist shot, combined with a quick release that will burn average goaltenders. Look no further than Galchenyuk's hat-trick against the Carolina Hurricanes last year for a sample of his speed and positioning.

And in case you missed it, Galchenyuk's linemates on the ice for his three goals against Carolina were Max Pacioretty and Brendan Gallagher, on a night when he was centering the Habs' top line. Pacioretty, primarily known as a sniper, finally had the chance to tap into his playmaking abilities, and earned the primary assist on every one of those goals. Not bad, but a game does not make a season.  After 12 games, the line was dismantled, and Galchenyuk returned to wing, alongside Tomas Plekanec.

Despite his penchant for scoring goals, you have to take note of Galchenyuk's passing record in the NHL. There's no doubt about it, he excels at helping his linemates score.

While Galchenyuk's offensive abilities rank among the Canadiens' best, his defensive game requires some attention. A quick look at his HERO chart confirms this. When it comes to playing without the puck, Galchenyuk's impact on his teammates is generally negative when it comes to shots against.

If he's going to play down the middle in 2015-16, he's going to have to commit to supporting his linemates a little more, especially if he hopes to gain his coach's trust.

They say you can teach defense, but you can't teach talent. If Galchenyuk and the Canadiens' coaching staff can nurture the former, they'll be well on their way to finally securing a very important piece of the puzzle. 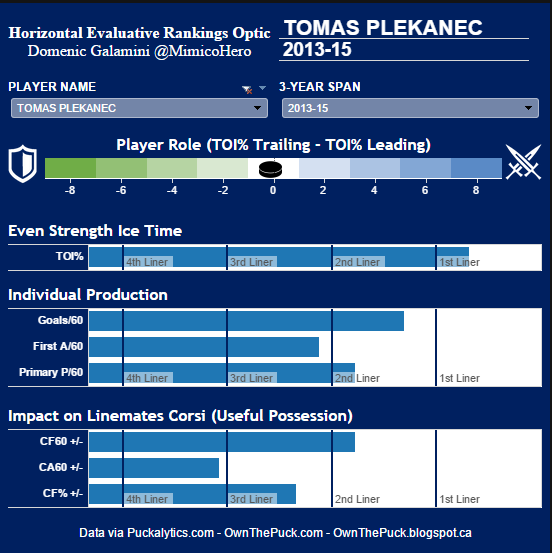 Galchenyuk is, in my wholehearted opinion, the Canadiens' destined number-one centre. Will there be growing pains? Yes. Would he still produce on the wing? Definitely. But can he take his game to the next level playing behind Pacioretty instead of beside him? I don't believe so.

In comparison, let's check out Tomas Plekanec and David Desharnais' HERO charts. For starters, it's clear that Plekanec seems better suited for the second line role he's filled for most of his career. His impact on linemates isn't all that more impressive than Galchenyuk's, while his individual production lags behind. 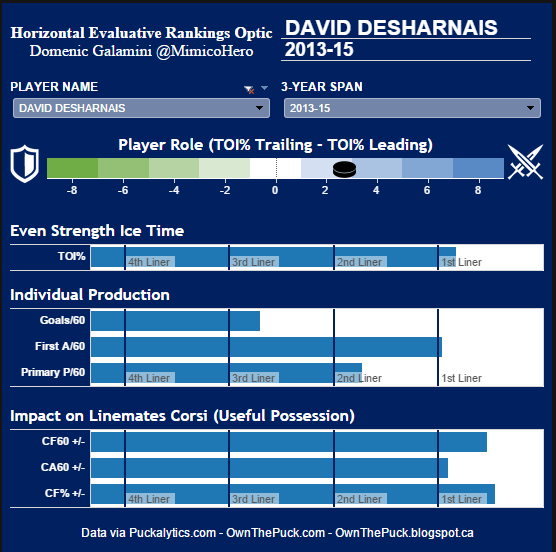 And then there's David Desharnais, whose positive impact on linemates far outweighs his individual production. So we find ourselves back to that old chicken and egg debate: credit to Pacioretty or Desharnais?

If it is Desharnais, why not sync him up with forwards who could use the boost (Smith-Pelly and Kassian, I'm looking at you). This would free up Galchenyuk to assume a permanent role on the club's first line.

Either way you ice it, Therrien has options heading into the season barring any trades. Galchenyuk has secured a top-six role, but how much higher can he go?

Maturity and experience will play a factor in his fourth NHL season, and if all goes well we should expect at 50 point season from him. However, 50 would be a mere improvement on his point-per-game pace to date. Can he crack 60? 70? 80!?

Well, that's up to Alex. And, of course, the role he plays this season.