Despite arguably being the team's third best defencemen for the balance of the season, Beaulieu continues to struggle for regular ice time with the Canadiens, will the 2015-16 season be his year?

We at EOTP opined in the 2014-15 season that this was Nathan Beaulieu's time to emerge as one of the team's go-to defencemen. Unfortunately, a year later this has yet to come to pass as the Canadiens' first-round pick from the 2011 draft seems destined to have to fight for every minute of ice time.

While he is now armed with a two-year, one-way deal at a bargain price of $1M per season - ensuring at the very least he will never be assigned to Hamilton - he does find himself relegated to the role of a third-pairing defender at present. Although there are some critiques against his play, they pale in comparison to the issues of every single defenceman who has pushed him to a lesser role since he started inching his way into an NHL job. 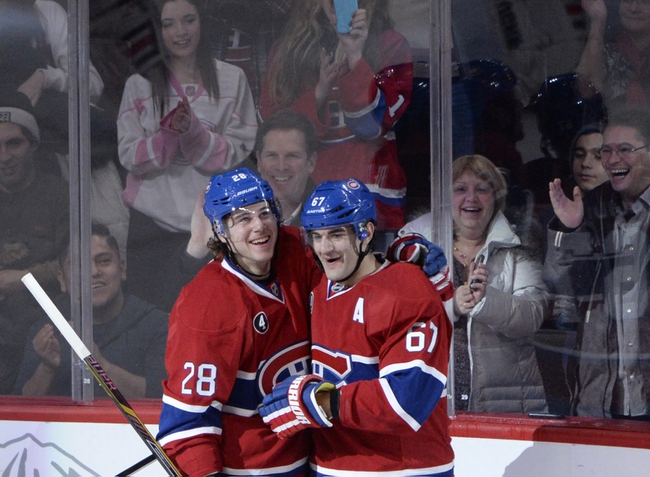 Since the 2013-14 season, Beaulieu has at times had to play behind defencemen who were below replacement level, such as Douglas Murray, and this past year he was constantly surrendering time to Alexei Emelin, who has the most onerous contract on the team. Unfortunately, it is common practice across the NHL for coaching staffs to favour veterans over younger players.

Beaulieu played 64 NHL games last season and is arguably in line to play a complete season with the Habs in 2015-16. The question of his role this year is the larger issue, as he seems to be in a permanent holding pattern as long as the coaching staff puts anyone else on the left side over him. A possible change in this dynamic may come from the team's consideration that Andrei Markov was overworked in the 2014-15 season, which led to his slip in performance towards the end of last season and the playoffs. Given that they seem partially aware of his limits and never seriously experiment with him being Subban's defensive partner, the door may be open for Beaulieu to move up.

This was about as non-controversial as the Top 25 voting can be. With just two voters ranking him fourth rather than third, the staff seems very convinced of his potential to be a top member of the organization given the opportunity.

Beaulieu has never been a stranger to the top of order in the Top 25 history. He was ranked fifth in his first year on the list in 2011 and maintained that spot in 2012. He lost ground in 2013 when Brendan Gallagher gained acclaim as a rookie and took fifth place, forcing him back to sixth; and moved up to third place in 2014.

It almost goes without saying at this point, but Beaulieu has top-end skating ability that makes every defender not named Subban look like they play at different levels when skating side by side. His speed and acceleration are impressive, and they open the door for him to be one of the team's better offensive options from the back end. The value of this ability is truly seen when he has some leeway to skate with the puck. With skating ability and good stick skills, he can start offensive rushes from within his own zone and take part in the offensive cycle once the team has set up in the opponent's end.

While he has struggled, for the most part, with consistent scoring in the NHL, it is worth noting that given his role as a third-pairing defenceman (often skating with less-talented forwards in front on an offensively challenged team), circumstances have not exactly run in his favour. Essentially being excluded from the power play did not help him either.

His HERO chart, at the very least, gives us evidence that he is ready for more responsibility.

While he definitely can keep up with Subban when it comes to skating, he does not mirror his senior when it comes to defensive skills. While he is not one to bail on assignments, he does not read plays as well and can be caught running around in his own zone. This could also be chalked up to some poor instruction since he turned pro, given the poor record of the AHL staff, and the NHL staff not designing a solid offensive scheme.

That being said, in order for him to hold his own as a potential top-four defender, he will need to work on his own to improve his defensive abilities in order to gain the trust of a coaching staff who always seems reluctant to trust rookies who seem to have any gap in their defence. Top-four defencemen are often expected to be able to play on both the power play and the penalty kill and to date, it seems an outlandish proposal for Beaulieu to ever see regular time as a penalty killer.

There's also the issue of his lack of offensive production, but given more opportunities and consistent ice time that problem should iron itself out. His absurdly low 1.6 shooting percentage last season is very likely to improve, which will boost his offensive totals and arguably sell the team on the value of his offensive contributions, making it easier for him to earn ice time, especially to help out a power play that could desperately use some new creativity.

Beaulieu is an NHL quality defenceman, and has been one for at least two years. His on-ice production has not exactly been an eye-raiser since he joined the NHL, but his opportunities to show off his abilities have been limited.

In terms of competition, his spot on the team is essentially locked in. He played 64 games last season and it is very doubtful that Mark Barberio or any AHL farmhand can seriously challenge him for a spot. The question is of course, when does the team acknowledge that Alexei Emelin is not a very good defenceman that shouldn't play on the second pairing?Of course, Beaulieu going on an offensive run will certainly help this matter. If he's a clear advantage to the team on the stat line when he is on the ice versus Emelin, it will make the decision easier. While many are likely to contend basic stats shouldn't decide usage to such a degree, this is how the team tends to operate.

It's worth noting that Beaulieu stands as the heir apparent to the No. 1 left defenceman position as Markov works through the second year of his current three-year deal. The odds that Markov stays on after his deal seem to be low, and barring a trade to bring someone into the organization, it is a job that most expect Beaulieu to evolve into.

Naturally he has some differences in style and ability versus Markov, but he remains the only defenceman in the organization that is a natural left defender who can potentially fill that role and those important minutes. Whether or not he evolves into this role remains to be seen, and while it can come off as unfair to expect him to take it on, the team finds itself with a rather unfortunate dearth of natural left-handed defenders. This may be one case where the team needs Beaulieu to be everything scouts projected him to be.