Share All sharing options for: Canadiens Top 25 Under 25: #4 Nikita Scherbak

"I love the kid but we won’t draft him…if that makes any sense." - NHL Scout

"He’s going to be anywhere from 10th to second-rounder, he’s a top 10 talent though." - NHL Scout

"I doubt we take him. I heard all the 'he’s not the average Russian' stuff, but he’s still a Russian." – NHL Scout

"I really like this kid and he was difficult to rank. We acted as if we were an NHL team and the Russian factor dropped him a bit for us. I wouldn’t be totally shocked if he slipped to the second round but I think he’s too good and will hang on." - Junior Scout 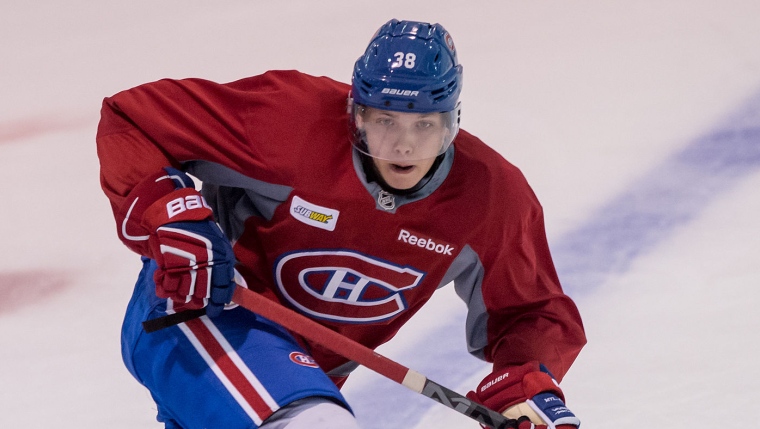 That was the type of attitude Nikita Scherbak faced during his draft year. Everyone acknowledged that he was incredibly talented, but his passport had a Russian flag on it, therefore he was ignored until the Canadiens had their turn at the podium.

Even his coach with the Saskatoon Blades, Dave Struch, used his place of birth to compliment him, in somewhat of a backhanded fashion, stating "the best thing about him is that he's very coachable and teachable. Because he can skate he can get on the puck, but when he's not on it right away he's not afraid to make or take a hit. When you've got that part of a game from a Russian player, it's exciting."

Fortunately for Trevor Timmins and the Canadiens, the lack of attention given to Scherbak worked in their favour, and they ended up picking an incredibly talented player with the 26th-overall pick, which isn't always possible when picking so late in the draft.

The Habs severely lacked high-end players in their prospect pool, and the addition of Scherbak was a much needed procurement.

Scherbak has played for three coaches in three countries over the course of the last three years, and next year he'll once again find himself learning under a new coach as he starts his pro career, likely with the St. John's IceCaps.

With the exception of Stephen, who might be one of the NHL scouts that provided the quotes above, every other panellist ranked Scherbak in the top 10, with 15 panellists giving him a spot in their top five.

Scherbak debuted in our yearly series at the impressive rank of #6 in 2014. Even though he only climbed two spots from last year, it's worth noting that jumping two spots is a much bigger accomplishment when going from #6 to #4, as opposed to, say, climbing from #17 to #15.

If you've watched Scherbak play, the first thing that jumps out is his incredible arsenal of offensive talents. He's got a laser of a wrist shot, is incredibly agile with the puck, and has a fantastic nose for the net.

If you paid attention to the website this year, you probably noticed a plethora of highlights demonstrating Scherbak's ability to use his creativity to terrorize defenders.

His deceptive release on his wrist shot somewhat reminds me of Max Pacioretty, in that it leaves his stick at such a high velocity that most goalies don't have time to adjust before it finds the back of the net.
His ability to score goals isn't his only major asset, seeing as he's an incredibly talented playmaker. Scherbak finished first among all 18-year-old players in the WHL last season when it came to primary assists, with 36.  The Moscow native also possesses a good skating ability, a relentless work ethic, and top notch hockey IQ. His situational awareness is off the charts, which is evident whenever you watch him play.
There have been some whispers that Scherbak actually regressed during his second year of WHL action, but the fact of the matter is that his numbers this year were quite respectable, and even though he only earned four extra points compared to his draft season, it was clear to anyone that watched him that he gained a lot of confidence on the ice. He was without a doubt the best player for the Everett Silvertips every night.
He participated in 38% of his team's points, and created almost 10% of Everett's goals. Here's the kicker; at even-strength, Scherbak led all other 18-year-old players with 60 points, 0.92 ES points per game, and 30 primary assists. His age-adjusted points per game was 0.91, which placed fifth in his age group, behind Rourke Chartier, Leon Draisaitl, Sam Reinhart, and Brayden Point. Essentially, Scherbak had a great year.

It shouldn't necessarily be considered a legitimate weakness, but Scherbak does have an odd stride. He skates very upright, which gives the appearance of an awkward skating stride. As is usually the case with offensive-minded forwards, there are criticisms that Scherbak can work on his defensive awareness, as well as his neutral zone play.

The one major factor that fans should consider, is Scherbak's penchant for cutting across the middle of the ice. It's led to him absorbing some big hits during his tenure in the WHL, and would probably lead to more severe injuries now that Scherbak is slated to play against professionals.

Seeing as he is a quick learner, he'll probably quickly adapt to his surroundings, which means he's likely to diminish the quantity of rushes that involve cutting across the ice recklessly with his head down.

There aren't many players in the Habs' prospect pool that could fit the bill as a legitimate top-line player, but Scherbak does seem to have that kind of rare potential. His shot is fantastic, his creativity is a breath of fresh air, and his positive attitude towards learning and getting better seems to be genuine.

This determined, versatile forward cracks the top 5 for the first time

As it stands, I have no issue stating that Scherbak is Montreal's best option of a prospect developing into a star player, and a potential cornerstone of the franchise going forward. If you've followed my comments throughout the years during the Top 25 Under 25 series, you know that I generally take a very conservative approach when discussing prospects, but Scherbak's skill set, combined with his relentless effort, leads me to believe that he's got a bright future ahead of him in the NHL.

As per usual, time will tell, but all signs point to Scherbak turning into a scoring threat for the Habs. It remains to be seen whether or not he can transition his game to a professional league, but don't be surprised if this young forward finds himself wearing the Bleu-Blanc-Rouge sooner rather than later.