This determined, versatile forward cracks the top 5 for the first time

Share All sharing options for: Canadiens Top 25 Under 25: #5 Charles Hudon

"Charles was a complete surprise. I wouldn't have thought he could make the transition from junior to the pros as easily as he did." - Sven Andrighetto 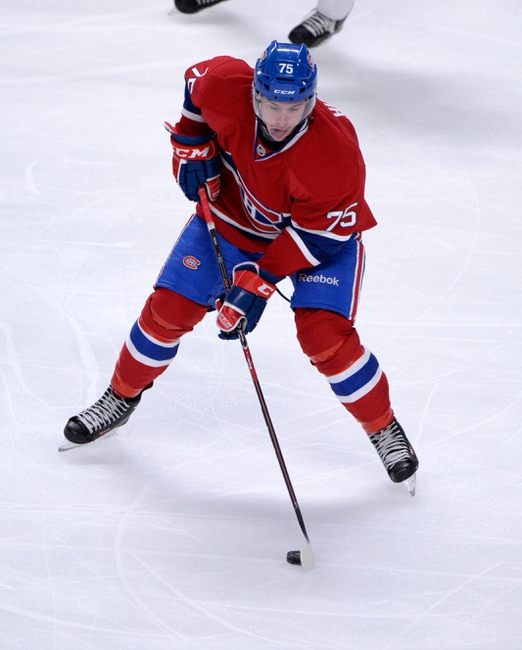 Charles Hudon, an Alma, Quebec native, began his junior career with the Chicoutimi Sagueneens. He was selected 6th overall in 2010 and during his first year in the QMJHL, Hudon won the Michel Bergeron Trophy (offensive rookie of the year) and the RDS Cup (rookie of the year). He also led the league in rookie assists with 37. During the 2011-2012 season, Hudon helped Team Canada win the Ivan Hlinka Memorial Tournament gold medal. He also played in the CHL Top Prospects game.

In 2012, the Montreal Canadiens took Hudon in the fifth round at 122nd overall. Hudon played his first complete season with the Hamilton Bulldogs this past year, finishing at second in team scoring. He was the AHL Rookie of the month in November. Additionally, Hudon was selected for the AHL All-Rookie Team, and played in the AHL All-Star Game. He was named most valuable player of the game.

Votes for Hudon were relatively similar across the table, with only two individuals placing Hudon outside of the top 10. Eight voters placed him in the top five.

This is Hudon's 4th eligible year for the Top 25 Under 25. in 2012, he placed just outside of the rankings. In 2013 and 2014, he came in at 10th. This is Hudon's first year cracking the top 5, likely due to a healthy season marked by incredible point production.

Hudon is regularly noted for his puck skills and the fact that he is a strong possession player. Despite his size, he's not afraid to mix it up with opposing players, and does not shy away from puck battles. When he has the puck, he is able to slow the pace of the game to his preferred speed and his incredible hockey sense takes over.

"Knowing that I wasn't necessarily going to get called up and play in Montreal last season really helped me focus and concentrate on what I had to do in Hamilton and where I needed to go. Since playing in the 'Q,' my mentality has changed a lot. My primary focus (in Hamilton) was on improving my defensive game." - Charles Hudon

As mentioned in last year's Top 25 Under 25 review, Hudon appeared to be a bit of an oddity. Over his 4 years in the QMJHL, Hudon's shot production was gradually increasing while his shooting % was gradually decreasing. This past year, Hudon's first solid year with Hamilton, saw a decrease in shot production from the previous season, but a jump in his shooting %. And while some may argue that his goal production has been decreasing, keep in mind that his impeccable ability to see the ice has allowed Hudon to continually set-up teammates, earning him an impressive 38 assists during his first year in the AHL.

As we know, Hudon switched from left wing to centre last year. This versatility is something that can greatly benefit the Canadiens organization down the road. Perhaps one of Hudon's best strengths is his ability to make good plays despite being in high-pressure situations. This is a skill that generally comes with time and experience and yet Hudon already displays great patience and a fantastic offensive awareness.

As is often the case come draft weekend, prospects can sometimes fall much lower than expected simply due to their size. This was the case for Hudon in 2012, when he fell to the 5th round after being projected to go as high as the 2nd round. Unfortunately for Hudon, he  does not have the speed to back up his lack of size. Hudon has also dealt with his share of health problems, notably a back injury that resurfaced in 2013, indicating that perhaps the youngster attempted to return too quickly.

First and foremost, we all know size isn't everything. Though Hudon has been criticized for his lack of speed, he has that ability to slow the pace of the game. Hudon appeared to be at peak health over the past season, missing only 1 game. I'd say these 'weaknesses' can be worked on with proper training and continued development.

Hudon has been compared to fan favourite Brendan Gallagher, likely due to his smaller size and ability to aggravate the opposition. Hudon is projected to be a top-6 forward who has plenty of offensive ability mixed with some defensive talent as well.

The Habs 2015 Top 25 Under 25 continues with a prospect who is back for the third consecutive year. Two-way shutdown forward Jacob de la Rose is wise beyond his years, and he comes in at number 6.

In my opinion, Hudon is one to keep an eye on come training camp as we know that he impressed the Montreal brass this past year in Hamilton. At this year's development camp, GM Marc Bergevin mentioned Hudon, along with Nikita Scherbak and Michael McCarron, as being potential inclusions on the Canadiens' roster this upcoming season. Talk about high praise for a player who has often been brushed off due to his 'lack of size.'

If there's one thing we've learned from watching Hudon over the years, it's that betting against him is never a wise move, and we shouldn't be surprised if he manages to earn a spot on the Canadiens' roster for the upcoming season.