The Habs 2015 Top 25 Under 25 continues with a prospect who is back for the third consecutive year. Two-way shutdown forward Jacob de la Rose is wise beyond his years, and he comes in at number 6.

When general manager Marc Bergevin took over the Montreal Canadiens, building through the draft unquestionably became a priority. After selecting top prospect Alex Galchenyuk third overall in the 2012 NHL Entry Draft, Habs brass elected to return to a plan they began implementing when Trevor Timmins took over; drafting a plethora of smaller, skilled forwards. 5-foot-10, 181-pound forward Sebastian Collberg (eventually traded to the New York Islanders in the Thomas Vanek deal) was a prime example of the mentality, selected 33rd overall.

A year later, Bergevin felt it was time to impermanently abandon Timmins' fearless tactic. Perhaps being physically pummelled at the hands of a much stronger Ottawa Senators team over a five-game series during the opening round of the 2012-13 playoffs served as inspiration ahead of the draft, because selecting players with size and strength took precedence in 2013. 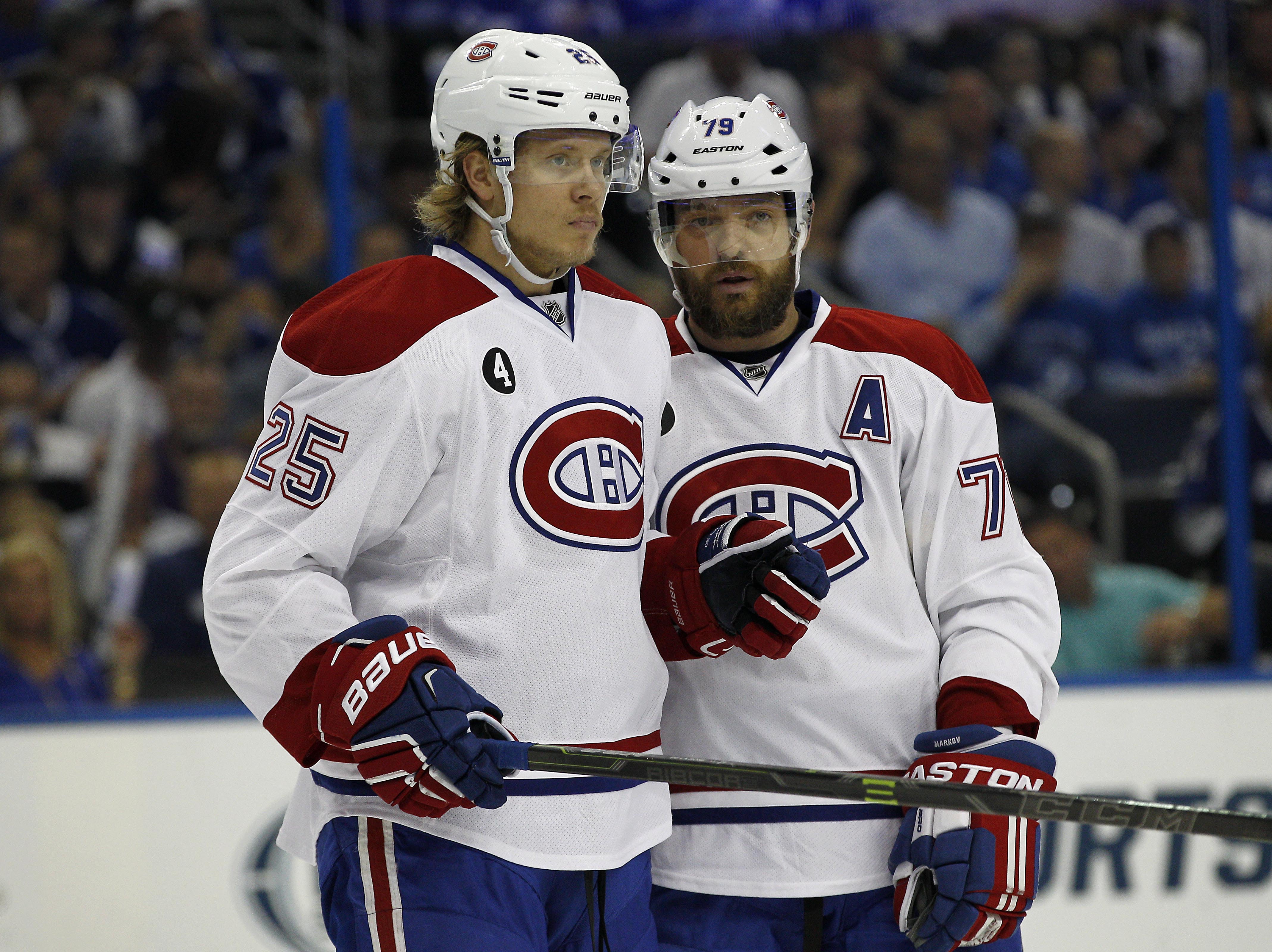 Five of the eight players selected in the aforementioned draft were at least six feet tall, and it was rather perceptible that getting bigger prospects was the plan. The trend was highlighted by the top two picks; after selecting 6-foot-6 power forward Michael McCarron in the first round, the Canadiens chose 6-foot-3 forward Jacob de la Rose with the 34th overall pick.

Although the young Swede was highly coveted by the Habs, it's rather difficult to envision the club prognosticating his rapid rise to the NHL. After a year with Leksands of the Swedish Elite League, he made his North American debut last season, joining the Hamilton Bulldogs of the American Hockey League following an impressive training camp with the big club. Equipped with maturity beyond his years, It didn't take long for de la Rose to make his presence felt.

Despite recording just five points in his first 27 contests with the Bulldogs, he quickly learned and adjusted to the North American style of play. De la Rose took a break from the AHL to captain Team Sweden at the World Juniors in December, where he recorded three goals and three assists in seven games while playing an important shutdown role throughout the tournament, his confidence undoubtedly growing. He notched six points in his next 10 games upon returning to Hamilton, earning a promotion to the Canadiens at the start of February. By the end of the month, he was told to start looking for a place to live in Montreal.

This is his third year of eligibility in the Top 25 Under 25, a list he has cracked on all three occasions. After coming in at 17th overall in the first season, he jumped all the way to 7th last year. Following a very successful North American debut and rookie campaign in the NHL last season, it was rather evident that he was primed to climb the ranks yet again this time around.

His size, speed and strength are the three essential contributors to his success. With a majority of the top prospects in the organization characterized as small, skilled forwards, his 6-foot-3, 207-pound frame, combined with his quickness and above average skating ability makes him an important and reliable player going forward.

His ability to play a physical game has been a pleasant surprise, one that wasn't totally expected when he was originally drafted by the club. Graced with impressive speed, de la Rose often finds himself in hot pursuit of the puck, putting pressure on the opposing team's defensemen before willingly initiating contact. His ability to transition following play in the opposing end should not be overlooked. He is all hustle on the backcheck as well, often the first man back to pick up a trailer and negate a scoring opportunity in the slot.

Playing a solid and dependable two-way game is the staple of de la Rose's emergence in the NHL. His poise and relentless work ethic will allow him to continue excelling as a principal contributor in a shutdown and penalty killing role. His maturity and leadership at such a young age will only allow him to progress further this season. At just 19 years of age, he played at least 10 minutes in all but two of the 45 games in which he sported le bleu, blanc et rouge. Evidently, it isn't difficult to trust de la Rose; a rare commodity in an NHL rookie getting his first taste of North American professional hockey.

His lack of offensive flash and ultimately goal-scoring ability will always create a question mark about his value as a key prospect in the organization. In 82 games with the Bulldogs and Canadiens (including the playoffs) last season, he only recorded 10 goals and seven assists for 17 points. He recorded just seven goals and six assists for 13 points in 49 games with Leksands of the Swedish Elite League the year before. Although his offensive numbers should increase as he matures, he will likely never produce at the overwhelming rate fans could be looking for from a high second-round draft pick.

It's uncomplicated to appreciate de la Rose's versatility, as he is able to transition between playing centre and wing with ease. However, the hope is he may one day find himself as the team's third-line centre. With 160 faceoffs last season, he had a 40 percent success rate. Tomas Plekanec, David Desharnais and Lars Eller were all over 50 percent, while Torrey Mitchell was nearby at 49 percent. Although de la Rose put up a decent percentage on the draw in his rookie campaign, he'll need to improve if he hopes to find himself as a third-line shutdown centre moving forward.

The talented and versatile two-way forward surprised many with his emergence last season. It's rare that one gains the trust of head coach Michel Therrien under any circumstance, especially as a 19-year-old rookie. Yet de la Rose found himself consistently on the ice protecting the lead during critical moments throughout his 33 regular season tilts, as well as in 12 additional pressure-packed post-season games. At just 20 years old, he's primed to play another important shutdown role for the Canadiens in what should be his first full NHL campaign this season.

De la Rose will enter the 2015-16 campaign full of confidence. Although he might never surprise us with impressive offensive production, he will be a very important player in the future.

After a tumultuous tenure in Vancouver, can Zack Kassian find his place on the Habs?

The sophomore will likely serve as a fourth-line winger this season, gaining more experience on the penalty kill, as well as in a shutdown role once again. By all accounts, de la Rose will continue to develop and the hope is that he will grow into a solid third-line shutdown player; perhaps even as a centre depending on what the team elects to do with Lars Eller in the coming seasons.

One way or another, de la Rose is a very valuable part of the young core the Habs plan on building around over the next few years. He may never earn the praise that point producers like Galchenyuk and Brendan Gallagher gather, but he will quietly merit it. The young Swede will most certainly be a critical role player down the road in the Habs' quest for a 25th Stanley Cup and beyond.