Maintaining his place from last year's rankings, Sven Andrighetto takes the #8 spot thanks to his offensive talents.

After being named the top rookie of the Hamilton Bulldogs the year prior, Sven Andrighetto entered the 2014-15 season looking to advance his offensive game to the level necessary to play in the NHL.

His route to the top league was altered at the beginning of the year, as he was switched from the role of winger that he had played his entire life to become a centre for the AHL team.  Whether that move was made to get him working on defensive duties or a shift in the position he will play in his professional career within the organization seems to be a matter of debate.  Regardless of motive, Andrighetto's role changed from being the designated shooter on his line to being the one carrying the puck and having to create his line's offensive chances, while also being more involved in retrieving the puck in his own defensive end. 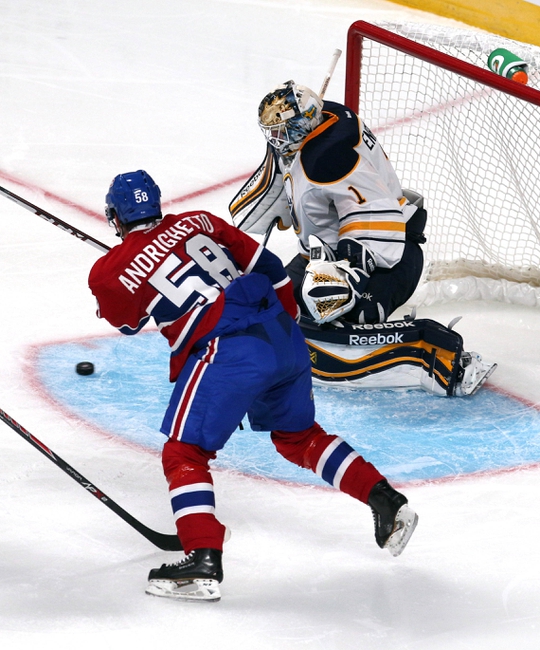 That positional shift resulted in a slight drop in his goal-scoring from his rookie campaign — down to 0.23 from 0.27 goals per game in his first year, registering slightly fewer shots on net per game, as well — though a few more assists in his sophomore season playing with rookies Daniel Carr and Charles Hudon saw his total offence increase from 0.68 points per game to 0.72.

His offensive production earned him a call-up a few months into the season when Lars Eller was out with an injury.  Being dropped directly into the hole in the middle of the third line created by Eller's absence, Andrighetto couldn't tread water in the beginning of his NHL debut.  He was rescued from that perilous situation and placed in a more reasonable position on Tomas Plekanec's wing, where he finally saw some time in the offensive zone, and converted his first NHL shot into his first NHL goal.

Over his next two games he added an assist and another goal to become the first Montreal Canadiens player in 38 years to begin his NHL career with a three-game point streak.  With Eller and other forwards returning to the lineup, Andrighetto had a difficult time getting ice-time in the final nine games of his month-long stint, being sent back down to Hamilton for the remainder of the season.

Five panellists gave Andrighetto his highest rating of #6, another five had him 10th, while four voters had him outside of the top 10, with my vote of 13 being the lowest he received.  Andrighetto finished in the middle of a group of three players within one-third of a point.

Drafted as a 20-year-old in his third year of eligibility in 2013, Andrighetto just missed receiving a spot in the top 25 after his selection by the Canadiens. The excellent start to his rookie AHL season had him up to 18th by the middle of the year, and his Bulldogs rookie award helped him gain a top-10 position this time a year ago.  Mirroring his offensive production in the AHL, he holds steady from last year to this, placing eighth once again.

Sven Andrighetto's offensive prowess is what has gotten him to the level he is, and what will have been responsible for getting him to the NHL in the event he makes the jump to the top professional league.  He has good shooting ability, with accurate wrist and snap shots in his arsenal, and shows the offensive instincts to get setup in a position to use them.

His skating ability may be an even bigger asset, as he incorporates both high acceleration and good speed to launch his team's attack. That mobility should serve him well in the continued development of his back-checking ability and transitioning the puck from defence to offence.

Combined with his modest size, he can use that speed to flit around the offensive zone avoiding the checks of defenders.  He also has a running back's stocky build and low centre of gravity that allows him to maintain his balance when he does get caught by a larger opponent. That elusiveness will be tested at the NHL level where the defenders possess both better skating and positioning skills.

Andrighetto's lack of defensive skill raises questions about his ability to play in the NHL, and was the major focus for improvement this season in Hamilton. "I feel like this year's been a ... really learning year for myself," Andrighetto said in an interview in early March. "I've worked a lot with the coaches in the defensive zone. That's pretty much where I have to improve my game to be a complete two-way player."

With his defensive game a work in progress, Andrighetto requires his zone starts to be significantly skewed toward the offensive end to be effective, and that is a heavy constraint to place on a lineup to be able to gain a spot within it.

If there's one thing the current makeup of the Canadiens' roster — with its glut of defensive forwards, full complement of NHL-calibre defencemen, and the best goaltender in the league — should allow, it's for an offensively-minded young player to be granted an offensive deployment to use his skill set.

The debate is whether that young player will be Andrighetto or one of his peers from the top line in Hamilton — Carr or Hudon — each of whom scored at a higher rate than their second-year linemate this past season.  Andrighetto knows he's going to have to work hard to earn a spot over the other prospects in the organization, but doesn't let that faze him. "... [I]t's never easy to make the NHL ... it's never been, so it's not going to be different for myself or any other player, but, at the same time, it's my goal since I started playing hockey and if I work hard and do my best and play my game — that's the reason why they called me up — then I will play there;  I'm sure."

Entering the third and final year of both his entry-level deal and his waiver exemption period, even if he doesn't make the team out of training camp he should receive some time with the big club this season for the front office personnel to gauge his development.

If Andrighetto is going to make the NHL, his current best projection is as an exploitation second-scoring-line winger to best take advantage of his offensive skills while being kept away from the defensive end. On the Canadiens roster, he could be an interesting option to play on Eller's line as the finisher, with a more defensively-responsible player on the other side. There, he could learn from one of the Habs' best two-way centremen while also getting enough offensive looks to score at a high enough rate to hold onto a spot.

His growth from a player who thought he could make it as a one-dimensional offensive talent to one who now understands that he needs to have additional tools to realize his dream of playing in the NHL is reflected in his analysis of his idol.

Checking in at #9 is Jarred Tinordi: A towering, smooth skating defender with a great upside.

"I used to admire [Pavel Datsyuk] because of his exceptional offensive skills, but over the past couple of years, I’ve realized that he’s a complete player; a great two-way player," Andrighetto explained in a recent Canadiens.com feature. "He’s probably even better on the defensive side of things than he is offence. He’s the type of player I want to become: someone who is good at both ends of the ice."

If Andrighetto can become that player, one who can retrieve the puck from opponents in the neutral and defensive zones, use his speed to transition it into the attacking end, and let his offensive skill take over, he will be an effective NHL forward.