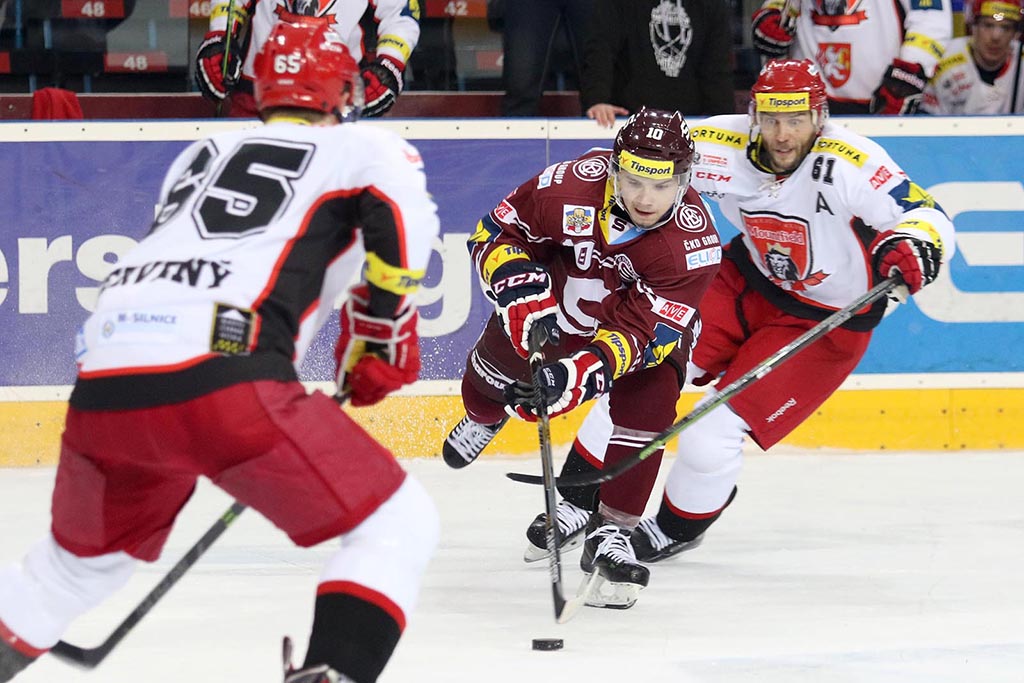 It is unlikely we will see Reway make the jump to North America for another year or two, as he has committed to developing his game on the larger ice in the Czech Republic. Before moving back to Europe last year, the 20-year-old completed two strong seasons with the Gatineau Olympiques in the QMJHL.

Reway has produced every where he's played, from a young age. A quick look at his career statistics will show that he averages more than a point per game on a consistent basis, both on large and small ice surfaces.

The biggest challenge for Reway will be maintaining that consistency at the NHL level, if and when he makes the jump.

The highest rank Martin Reway received for this year's Top 25 Under 25 was Scott's vote in the top five. The Prague born left-winger had four top-10 votes and none lower than number 20.

Whether his size dropped him in some rankings or his skill propped him up in others, one thing is clear: the Eyes on the Prize crew are confident he is a skilled prospect with enough upside to garner consideration as a valuable player for the Habs.

In his first opportunity to crack the Top 25 Under 25, Martin Reway fell short. After being drafted in the fourth round by the Habs in 2013, Reway came in 33rd overall in our rankings. However, a strong showing at the 2014 WJC helped him leapfrog his peers to 14th overall in last year's rankings.

Another year later and Reway finds himself one position better at number 13. Considering there were some graduates ahead of him, the jump is modest at best.

Reway's skill set draws comparisons to that of a familiar name: Alex Kovalev. Martin's stick-handling ranks highly among the Habs prospect pool. He will continue to hone that talent playing first-line minutes in the Czech Republic, where he will surely see quality ice time, including valuable power play minutes.

A playmaker at heart, Reway has great vision on the ice, and is incredibly elusive. With that kind of talent at their disposal, coaches need only support the winger with linemates blessed with strong positional instincts, so as to be ready when his puck finds their tape.

During the 2015 World Juniors, Slovakia leaned heavily on their Captain. Watching the games, it seemed as though he was on the ice every other shift (and perhaps he was). While the assignments did seem to weigh on him, his determination propelled his success.

Possibly the most impressive part of the final WJC appearance was a deviation from an offensive focus to a more rounded two-way game. As a returning player, Slovakia looked to Reway to neutralize the opponents' best players. Reway's ability to diffuse plays followed by his natural offensive instincts powered Slovakia's counter attack on route to a Bronze medal win over Sweden.

Stop me if you've heard this one before. If only Martin Reway had Joe Thornton's frame, right?

Currently listed as 5'8" and 170 lbs on the Canadiens website, the stakes are stacked against Reway. Like most prospects his age, he will need to find the perfect balance in order to bulk up while maintaining his finesse. The scouts saw something in Reway, a raw talent, maybe, that convinced them to overlook his size in favour of skill.

A high risk, high reward prospect - Reway will need to look to other successful NHLers who overcame small frames to provide big production. Habs fans need look no further than Brendan Gallagher who gives nearly as much as he takes night in and night out. Even David Desharnais can be looked to as a role model, or the recently retired Martin St. Louis.

It won't be impossible for Reway to make the NHL - far from it - but it will be tough. With the right support from his coaches and teammates Martin will be able to focus on his strengths. Thanks to some extra work this summer, he did manage to tack on almost 20 lbs to his frame.

Martin Reway has the talent and consistent production numbers of a top-six winger. It remains to be seen if he will force his way into that role with the Canadiens, particularly with so many similar prospects knocking on the door.

Thomas gains ground on the top 25 list again this year thanks to his NHL debut, but where is his future heading?

Thus, remaining with HC Sparta Praha is probably the best course for his career at this time, so he can focus on becoming a first-line talent before making the jump back to North America.

The speedy left-winger may need to continue to develop his two-way game to secure a spot with the Habs. If recent history is any indication, Reway will need to work his way up through the lines before claiming a spot in the top six. With Max Pacioretty and Alex Galchenyuk currently occupying those left wing slots, there isn't a lot of room for Reway to make his mark.

If and when Galchenyuk moves to centre, the door will open for Reway. As is the case with most potential NHL players, Reway will face stiff competition for any open roster spot along the way.