Thomas gains ground on the top 25 list again this year thanks to his NHL debut, but where is his future heading?

With the Top 25 under 25 nearing the halfway point, we come to the profile of Christian Thomas. He's a former OHL scoring ace who is working to show he belongs in the Montreal Canadiens lineup, while his competition for such a position only seems to get more intense. 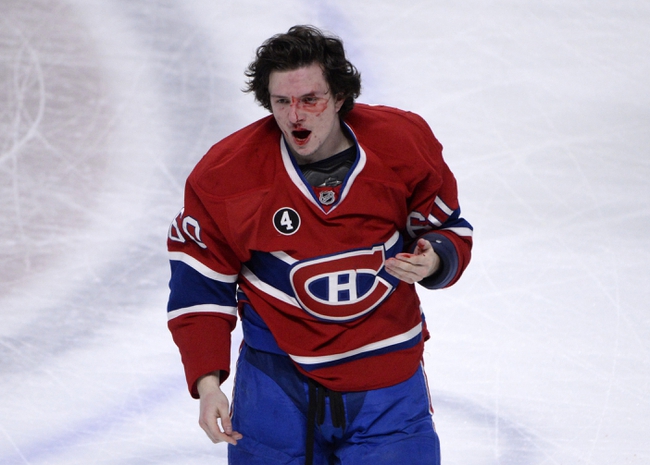 The price for the organization to acquire Thomas was Danny Kristo, a player two years his senior, who has yet to break into the NHL himself. Given the age difference and in the limited sampling we have of Thomas at the pro level, it is now fair to say that Marc Bergevin probably won this trade of prospects. While Thomas at best seems to be destined for a depth role at the NHL level, he is more of an asset to the organization than Kristo was likely to be.

Thomas saw action in 18 NHL games last season and will need a very good camp to get as much or more time in with the team.

There was not a lot of dissent on Thomas among the voters, with 17 of the 18 panelists ranking him in the 10-18 range. Mitch was the lone dissenter, placing him 23rd, whereas Cara gave him the highest vote. The panel likes Thomas, but the lack of high votes is likely tied to the competition he will face, and the estimation of his upside.

Thomas made his debut in this series back in 2013, finishing 19th. The following year he jumped two spots to 17th, and followed it up by gaining three spots in this year's rankings. His slow, yet steady climb up the rankings is not inconsiderable, due to the growth of the team's prospect base in the past three years.

Befitting any smaller skater that tries to make the NHL, Thomas displays very good skating ability. He shows no issue keeping up with the pace of his NHL linemates, and fits in well with the speedier elements of the roster. His acceleration is great, and he's able to handle the puck while moving at top speeds as well.

While his goal-scoring abilities that saw him get drafted have yet to translate to the pro level, he has demonstrated a good ability to press offence at the NHL level.

While Sven Andrighetto was the flashier of the two rookies on the scoresheet this year, with points in each of his first three games, his overall underlying numbers were less impressive than Thomas'. Andrighetto had a 16.7 shooting percentage through 12 games, while Thomas had a mark of 3.8 through 18 games. It is not difficult to see that one is likely inflated and the other is incredibly unlucky.

Dipping into analytics for a moment, Thomas' shot- and scoring-based numbers were quite interesting. When he was on the ice the team's overall Shots For per 60 minutes numbers averaged 28.62, while Andrighetto clocked in at 26.26, showing they were very comparative in how often shots were generated when on the ice, with a slight edge to Thomas' presence. There was a notable difference though when it comes to calculating Scoring Chances For per 60 minutes, as Thomas' came in at 22.13 and Andrighetto was notably lower at 17.73.

At the very least, Thomas shows to have as much or more promise at generating offence as Andrighetto does, he just had a hard time with luck when he was on the ice. Also factoring in here is that Andrighetto started 60.4% of his shifts in the offensive zone while Thomas started 50.6%.

He doesn't seem to be deterred by physical play and while he does by no means excel at it, he does display a willingness to go to the net as the opportunity presents itself.

Some may be quick to point out that Thomas ranked above Devante Smith-Pelly in our ranking, and that could lead to some head scratching, as it appears that Smith-Pelly has already established himself as a legitimate NHL player, whereas Thomas is yet to reach that level.

Unfortunately for Thomas, he hasn't received the same opportunity as his counterpart, even if the two of them put up roughly the same metrics at the NHL level.

To be fair, this chart's value is incredibly limited, seeing as Thomas has played very few games in the NHL, but it still gives us an easy way to visualize the difference between both players.

As you can see, Thomas' impact on his linemates is much better, and while his offensive impact is negligible, so is Smith-Pelly's.  It's also worth noting that not only did Smith-Pelly receive more ice time, but he has been slotted alongside better players, playing 42% of his regular season shifts last season in Montreal with Lars Eller, whereas Thomas' most common centre was Manny Malhotra.

Of course, those are incredibly limited sample sizes, however it does demonstrate that the gap between the two really isn't as big as some might assume. If Thomas can solve his offensive woes, he has the opportunity to widen the gap even further, although it remains to be seen if he'll earn the ice time that could lead him to a more consistent and important role in the NHL.

Simply speaking, a lack of finish seems to be following the former OHL goal scoring ace. With 42 goals in 185 career AHL games making up the relevant sample to examine for his pro-level production, his goal scoring abilities have not yet proven to be reliable, and while capable of generating chances, he so far does not seem capable of finishing them off on a regular basis.

Others on the depth chart may pass him if they show they are able to do more with the offensive opportunities they are given. His size is arguably a problem in itself, as it just leaves him fewer options in certain situations and unfortunately, it can be seen as a negative by a coaching staff if they perceive they have too many smaller players already on the roster.

With his debut in the NHL giving an indication of what he can offer the team, it is arguable this may be his make-or-break season with the team. There is a glut of players competing to play in the bottom-six of the group this season and he presently does not offer a standout skill to endear him to the staff to play him over others. If he fails to establish himself with the Canadiens in 2015-16, his position only worsens as skaters like Charles Hudon, Artturi Lehkonen or even Martin Reway may make the case for their inclusion while offering a much more attractive offensive upside that may encourage the team to add another small skater to the lineup.

Up next on the list is a first-timer: Devante Smith-Pelly makes his debut at number 15.

Arguably, his best projection is a third-line winger on a weak roster, and a fourth-liner on a team with a deep lineup. He lacks the offensive ability to push any higher, and while his defensive abilities are not a liability, they are not impressive enough to gain a spot as a defensive specialist either. A lack of finish in his old specialty and a potential inability to find a new one may leave him as a professional journeyman. As is the case with most aging prospects, this will be a big year for Thomas to establish himself as a legitimate NHLer.