Once an afterthought in the Canadiens' prospect pool, Jérémy Grégoire continues to climb up our Top 25 Under 25.

Jérémy Grégoire joined the Montreal Canadiens organization as a sixth-round pick in 2013, and like many late-round picks, the Habs selected Gregoire hoping that his potential would carry him to higher levels of hockey.

He used a point-per-game draft+1 season to justify his selection, ascending the Canadiens' organizational depth chart and even thrusting himself into the conversation surrounding Team Canada's roster for the World Junior Hockey Championships. Then, adversity struck.

A wrist injury cost Grégoire his shot at playing the WJC on home ice, not to mention the first half of his major-junior campaign. When he returned, however, he wasted no time making his presence felt. 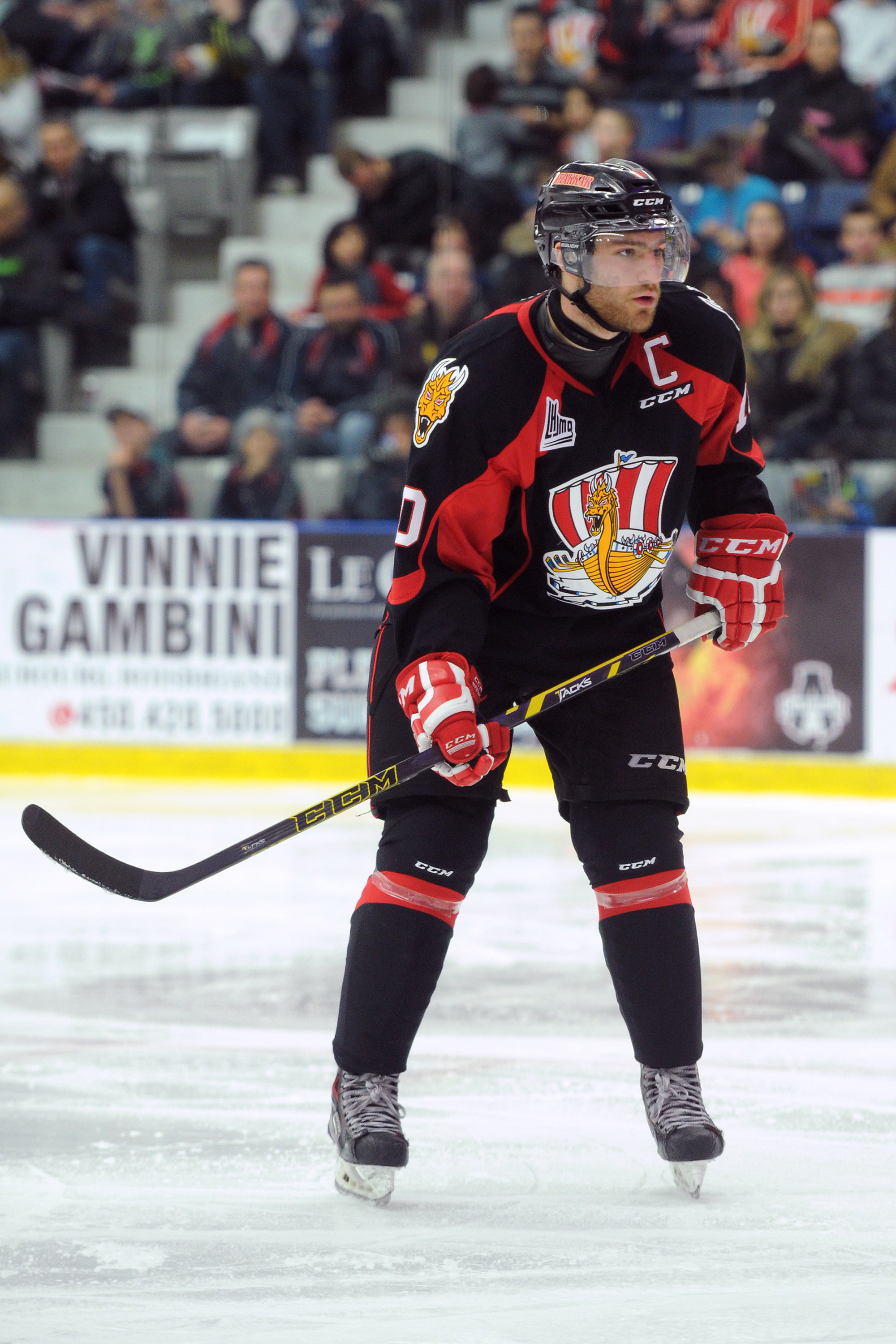 The captain of the Baie-Comeau Drakkar provided an immediate boost to his offensively-challenged club, putting up his second consecutive point-per-game season. He generated almost five shots per game, outpacing all of his Baie-Comeau teammates, including league-leading goal scorer Maxime St-Cyr. His 20 goals in 32 games was good for third on the team, and in the playoffs, he turned it up again.

Gregoire did everything in his power to push his Baie-Comeau Drakkar through their playoff run, and while that campaign ended early, 12 games were more than enough to showcase Grégoire's burgeoning talent. Burdened again by the disadvantage of playing the same or fewer games than his principal competitors,  Grégoire's 10 goals and 11 assists placed him 11th in the playoff scoring race.

As a senior CHLer with professional aspirations should, Grégoire has made it clear that he has outgrown the QMJHL. Next, we'll take a look at the skill set that made that possible, and see where he fits in with the Canadiens organization.

Most votes for Grégoire fell in the high teens or low twenties, and nearly all of our voters agree that Jérémy Grégoire is a top-25 prospect in the Habs organization. With a low vote of 26, however, we are still without our first unanimous top 25 pick of 2015.

Grégoire debuted in the outer reaches of our annual rankings, hitting #36 following his draft selection as part of a 2013 class that included polarizing prospects like Michael McCarron and Zachary Fucale. His breakout 2013-14 campaign put him on our voters' radar, and propelled him into the top 25 for the first time. Now, at the number 20 slot, Grégoire has surpassed players like Mac Bennett, Darren Dietz, and Mark MacMillan that outranked him previously.

Grégoire is an extremely versatile player.

Baie-Comeau's centre depth meant that Grégoire played primarily as a right winger last year, but he'll likely start his IceCaps tenure as a centre. Despite playing with less accompanying talent than in the season previous,  Grégoire continued to score in Baie-Comeau this season. Much of that productivity can be attributed to a deft stick, smart positioning, a willingness to play a physical game on the offensive boards, and a relentless motor.

Last year, Robert noted that in order for Grégoire to maximize his chances of advancing to the next level, he needed to prove that he can both score and check effectively at the major junior level. Whether he's eluding goaltenders with his slick hands, using strength and skill to work the puck to scoring areas, or refusing to give up possession behind his opponent's net, Grégoire has demonstrated that he is ready to compete with the pros.

Grégoire entered the 2014-15 season with two major weaknesses: his puck skills, and his skating. His puck skills have continued on a steady upward trajectory, however, and his productivity in the Q is exemplary of his offensive growth. The IceCaps will count on Grégoire to move the puck effectively enough to be a depth scorer this fall.

If Grégoire is to keep up in the American league, then, his first priority should be to improve on that other concern: his skating. Grégoire's speed is average at best, and if he is to uphold his reputation as a high quality defensive player against more difficult competition, he will need to invest in his skating.

Grégoire, however, is devoted to his fitness, and has a couple of built-in advantages in that regard. His father, former QMJHL 45-goal-man Jean-Francois Grégoire, is now an assistant coach of the Acadie-Bathurst Titan and a catalyst behind the opening of a hockey-focused fitness facility in Grégoire's hometown. His work ethic, combined with access to facilities and expertise, should help him be as prepared as possible for his first pro year. As Brendan Gallagher recently demonstrated, age 20 is not too late for a prospect to bring his skating up to pro standards — especially when fitness runs in the family.

As a prospect selected in large part for his versatile, two-way game,  Jérémy Grégoire has overcome his first challenge by showing that he can hang with anyone in the QMJHL on offense or defense. When he graduates to the St. John's IceCaps this fall, he'll have to show that he is capable of both scoring and shutting down all over again.

The 19-year-old is one of a flood of prospects that will populate the IceCaps roster this year, and Grégoire will likely start in a third-line role alongside at least one other rookie.The maturity of Grégoire's game, especially on defense, will be tested immediately, but regardless of the early returns, he should have time on his side. When Grégoire became a member of the Montreal organization, he was projected to factor into the Habs' roster conversation on a timeline of about five years. Two years in, that estimate still seems appropriate, giving the Sherbrooke native at least a season or two to hone his craft in the AHL before he looks to move into the Habs' bottom-six.

Wherever he has played, Jérémy Grégoire has been a leader in the dressing room and an impact player on the ice. If he is to one day suit up in the Bell Centre dressing room, however, he'll next need to show he can make the same impact further east.