Dalton Thrower took a significant backwards leap from his 2012 ranking of 16th. Personally, I ranked him higher at 15th, and I'm going to tell you why. Thrower is coming off a particularly bad season in the WHL, but I have every reason to believe that he can and will bounce back this year.

Dalton Thrower comes in at #23 in this year's edition of the top 25. This is a pretty steep drop from last year, when he came in at #16. I don't think it's necessarily unfair that he dropped on the list, but I had him ranked much higher because I think he could prove quite valuable in the future.

It would be generous to say that Thrower didn't have a great season this past year in Saskatoon. Obviously, voters for this year's top 25 took that to heart, hence his drop in the rankings. He dealt with injury issues, was inconsistent when healthy, and also was suspended for the remainder of the Memorial cup for a hit to the head of Taylor Leier of the Portland Winterhawks. He also dropped from 54 points to 27 points while playing in 12 fewer games than he did in the 2011-2012 season. The cold comfort in that is that he improved defensively from what I've seen, posting a better plus/minus than in previous years and reigning in some of the recklessness that he's known for.

I feel like this past season is nothing more than a hiccup. I expect a lot better from him and I believe he's still capable of producing, most importantly if he stays healthy. He has good puck moving skills, skates well and can chip in offensively at a decent rate. He has an excellent shot, which is always a huge weapon for blueliners. Selected in the second round of the 2012 entry draft, 51st overall, Thrower was a steal if you ask me. He was projected to go higher by most, and very well could have. 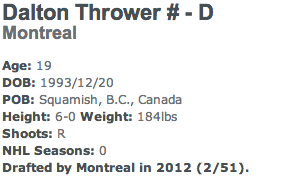 Thrower's poor season really affected his rankings, with four voters placing him outside the top 25. 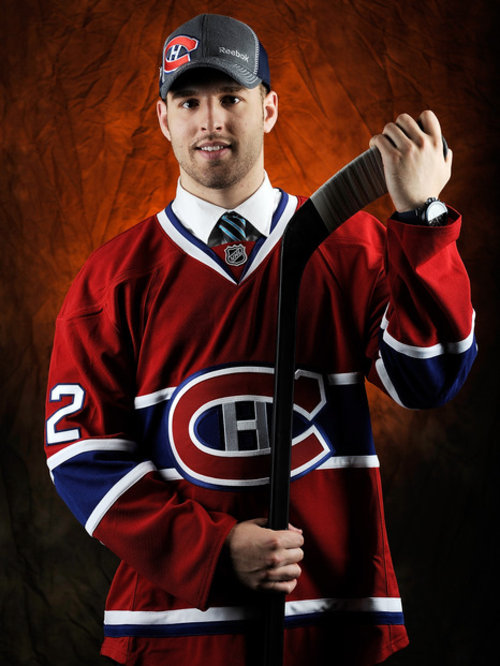 If you've watched any game film of him, you'll have noticed he is quite good at quarterbacking a powerplay. He has great puck-moving skills and an excellent shot that makes him a big threat when his team is up a man. At even strength, he has the ability to jump into the rush, and looks more like a forward sometimes when he does. He has good speed which enables him to be quite a nice weapon when he moves up with the forwards on the attack.

At 6'0" and 197 pounds, he's not exactly massive, but he plays a much bigger man's game. He's very physical, is not afraid to drop the mitts, and makes his presence felt with those attributes. If he gets the opportunity to take some cues from P.K. Subban, I think he could develop into a top-four defenceman one day. He's not there yet, but I have every reason to believe in his potential.

While he showed me some defensive improvement this past year with the Blades, he is still a player that can be a bit reckless. He does have good offensive upside, but is not as adept at picking his spots as, say P.K. Subban. That said, he could be a liability if he does not learn how to be more selective when taking offensive chances.

One of his strengths is also a bit of a weakness. He is a good hitter for his size, and plays a good physical game, but can be reckless with his checks too. As I mentioned earlier, he was suspended for the remainder of the Memorial cup after an incident against the Portland Winterhawks. He doesn't have much of a history with head shots; the real issue with his aggressive checks is that they sometimes lead to him being out of position.

What I'd like to see from Thrower this coming year with the Vancouver Giants is a continuation of his defensive improvement, and for him to get back on track in terms of offensive production. If he puts on a show this year like he has the ability to do, I think he's not only on the Bulldogs next year, but taking on a bigger role with them than you might think.

Thrower won't be making the pro jump this year, but that's not a big concern for me, even though he'll be turning 20 in December. His rights were acquired from the Saskatoon Blades by his hometown Vancouver Giants, so he'll be playing his final year of junior with some extra motivation. His confidence may be a little bit down after last year, but given his situation, he has every reason to work his tail off to get back to where he can be. Playing back home after a poor season, he'll not only be enjoying a homecoming, but trying to prove that he can make it in pro hockey.

We're asking all readers to have their say in the comment section on whether they would trade a player on the list for one behind him. There are two guys behind Thrower on this year's list; Patrick Holland and Mac Bennett, plus the ones who didn't make it. Would you trade Thrower for either of these guys? Personally, there's no way I would. I firmly believe that Thrower is underrated on this list due to a bad season last year. There are even some guys coming up ahead of Thrower that I wouldn't trade him for. But now it's time to have your say; would you trade Thrower for someone behind him on the list?