After lighting up the WHL, how did Patrick Holland adjust to his first season of pro hockey?

We begin our annual prospect countdown with a look at a prospect making their second appearance on the list. Once a 7th round pick of the Calgary Flames, Holland was considered a longshot to ever make the NHL. Patrick Holland broke out in the 2011-12 season however, posting 1.5 points per game while playing on one of the most loaded lines in the WHL. Amidst his most successful campaign to date, Holland was dealt to the Habs in the Mike Cammalleri deal, coming to Montreal with Rene Bourque and a second round pick that would become goaltending prospect Zachary Fucale. With a new, stronger system to compete in, Holland began his transition to professional hockey last season.

More on Holland: Holland's 2012 Top 25 Under 25 profile Holland won Bulldog of the week honours once this season 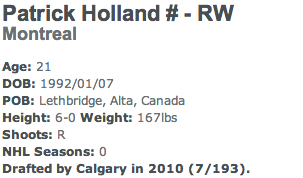 Holland may have fallen victim a little bit to the huge influx of highly rated forward prospects from the 2012 and 2013 drafts. The opinion of the panel on him doesn't seem to have changed much, but he's dropped 6 spots from last year, with two voters placing him outside the top 25. 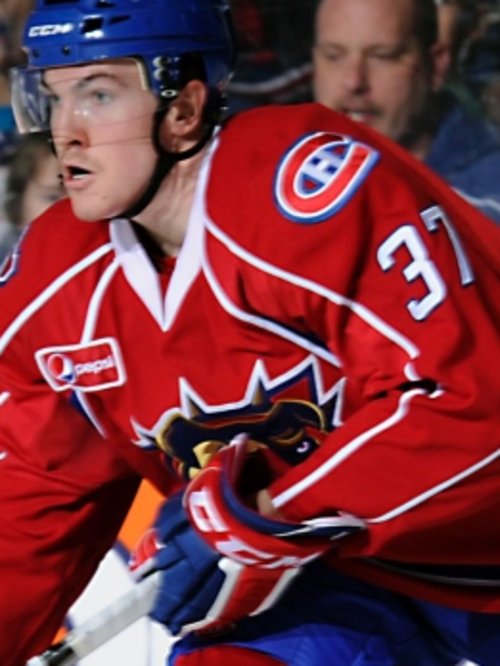 Holland persevered through a difficult season with the Bulldogs, as injury, youth and other factors led to a last place finish for the Habs' farm club. After Brendan Gallagher left the Bulldogs to join the Habs, he was often the the Bulldogs biggest scoring threat, forced to carry the load on a team lacking in offensively-gifted players. In terms of physical tools, mixed reviews indicate the Holland has an average-to-strong shot, and a track record that shows he can be effective in his opponent's end. Holland is often heralded for his hockey sense and intelligence as well, which may be the traits that allow him to take the next step in his career.

His main asset though may be his vision and creativity, as he's a talented playmaker. That may be why Sylvain Lefebvre attempted to try him at center last season in the AHL, even though it was a failed experiment. With the lack of scoring talent in Hamilton last season, it's possible that his offensive potential wasn't given a real chance to shine.

Holland, while a smart and hard-working player, does not have the top-end skills of some of the other offensive prospects in the Canadiens system. While Holland has bulked up beyond the 167 pounds that eliteprospects.com lists him at, he is not a large player. In fact, Holland has even acknowledged being outmuscled during his transition to the AHL, and that putting on muscle is one of his top priorities if he wishes to continue to improve.

As a player with an average skill-set, and one that is sitting behind a number of talented prospects in the Canadiens strong system, Holland has his work cut out for him as he vies to one day make the Canadiens roster. Holland performed well last year, given the challenging circumstances he was placed in. However, he will need to show growth in all aspects of his game if his goal is to one day pull himself above the Blunden line and into consideration for a Canadiens roster spot.

Holland has spoken to a desire to translate his work ethic and gritty style into something resembling Brendan Gallagher's game, which for Holland will mean playing more instinctively while continuing to situate himself along the boards and in front of the net.

In the short term, look for Holland to increase his production as he acts as one of very few weapons on the Bulldogs roster. While Holland will likely never be counted on for offensive production or powerplay time as a member of the Canadiens, continued growth along his current trajectory may make him a good candidate for fourth-line duty with the Habs in two or three seasons.

The way we rank players in the Top 25 Under 25 is to simply ask, would you trade the guy you ranked 24th for the guy you ranked 25th? If the answer is yes, then you should switch them. A new idea we had for this year's rankings is to ask the readers. Would you trade Patrick Holland for a player further down the list? Specifically one of Brady Vail, Joonas Nattinen, or Sven Andrighetto?