Every year when we go through this list we inevitably underrate a couple of guys who will make the list next season, so we always try to write a bit about the players who almost made the top 25.

In a system as deep as the one that Trevor Timmins and the Montreal Canadiens have built, there are bound to be some good players who miss the cut for the Top 25 Under 25. There is a variety of reasons why this could happen, but there is always a guy or two that surprises the following year and makes it in. Last year for example, Charles Hudon missed the cut by a fair margin which, as you may have guessed, didn't happen this year.

I'm going to do things a little bit differently than what Stephan did last year, and focus on the three players I feel definitely should be within the top 25, and write a mini profile for each of them. 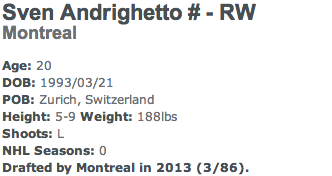 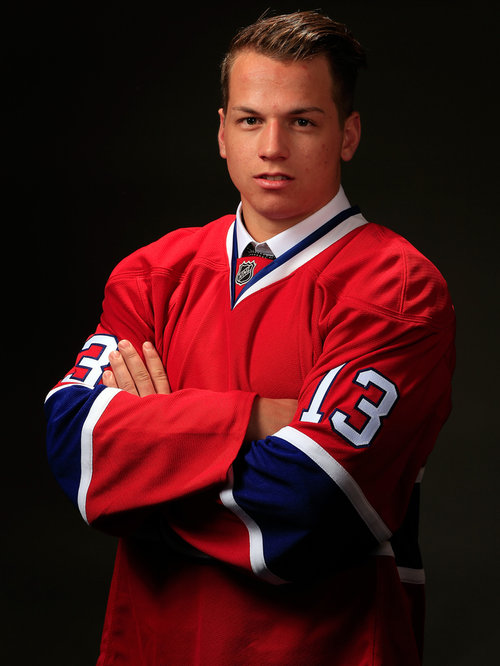 I know, the first guy on my list is a guy I personally didn't rank in the top 25, but I disagree with my past self now and you'll just have to deal with it. Andrighetto finished 26th in voting overall, and is easily the most offensively talented player to not make the Top 25 Under 25 this season.

Sven Andrighetto was drafted just this past June by the Canadiens, even though he's 20 years old. He's undersized at 5'9", which may be why he was overlooked up until now. On first glance, drafting a 20-year-old CHLer seems like a bad idea, but as it happens, Andrighetto compares extremely well with players in his original draft year of 2011.

The Swiss right winger has produced 172 points 115 games since his draft year for just under 1.5 points per game (1.49). That's impressive on its own, but even more impressive when we insert some context and compare him to his peers.

For this list, I only took players who've played two years of CHL after their draft year in the top 40 picks; that way the comparison is fair. Now, are we saying that Andrighetto is nearly the equal of 7th-overall pick Mark Scheifele? No, not at all, but the point production is there.

Corey Pronman had this to say about Andrighetto before the draft:

Andrighetto has been passed over twice in the NHL draft, but he has made a strong case to be drafted this time around. He had a dominant season in the QMJHL as a 19-year-old, and he had a very good World Junior tournament. He is an above-average skater, arguably high end, and he accelerates very well. His ability to gain the zone with his speed is quite impressive. While speed is his best offensive skill, he is also a creative, instinctual passer who hits his targets well, makes good saucer passes, and generally makes the right decision. He does have puck-handling skills as well, but a dangle-and-control game will not be where the roots of his puck possession come from. His main weakness is his physicality, as he is just 5'10" and not overly gritty. He can be pushed off of pucks quite easily. His defensive value is also questionable. 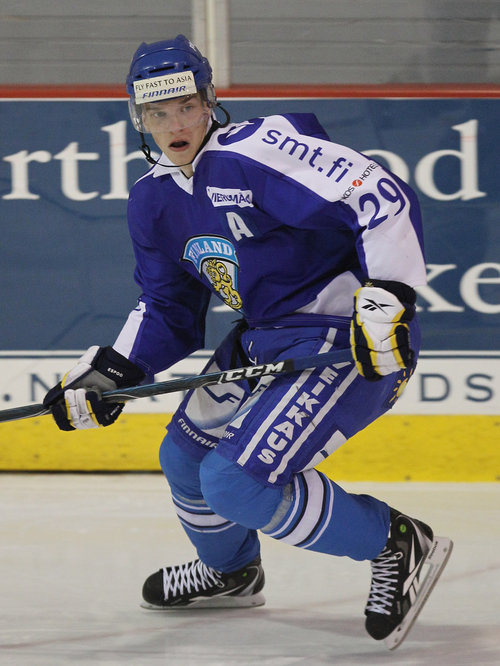 Joonas Nattinen is one of those guys who you can't get a good valuation of his talent from looking at a stats sheet. A very low point producer in Finland, Nattinen broke into the Top 25 Under 25 last year after a breakout campaign in the AHL where he played a shutdown role for the Bulldogs and put up a point every three games. Those aren't sparkling offensive numbers, but that's not the player that Nattinen is.

So if Nattinen is so solid, why did he fall down from 22nd to 27th this year? Well, over the first 24 games of the season Nattinen was the best center on the Bulldogs, taking on the other team's top lines (and according to Olivier, factoring in on a ton of the scoring chances), and producing more often than the year before in spite of some rotten shooting percentages the whole team was experiencing. After that, though, Nattinen was injured and missed the rest of the season.

At 22 years old, missing nearly an entire season can take a chunk out of your value, as by that time in your career people are expecting to see something. With that said, though, what we've seen from Nattinen tells me that he was significantly ahead of a player like Patrick Holland.

Had he played into the season, he may have got the call up to the big club over Michael Blunden or Gabriel Dumont. Corey Pronman had this to say about Nattinen in 2011:

The Good: Joonas is a fine two-way center who thinks the game at an above-average level. He's the kind of player who always finds himself around the play at both ends of the rink. He plays a responsible defensive game and supports his defenders well. Nattinen has decent vision and can be a fine distributor. His weight listing may be a tad understated, as he looks bigger on the ice, and is quite muscular and strong. He's not an overly physical player, but shows fine ability with his play along the walls. He has decent prowess with the puck in tight quarters during the cycle and in front of the net.

The Bad: Nattinen is a below-average skater who can on occasion show a decent burst, but his mobility doesn't really impress and there are times he can look quite heavy-footed. His open ice skills are below-average and he's really a true offensive creator. 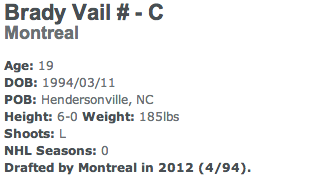 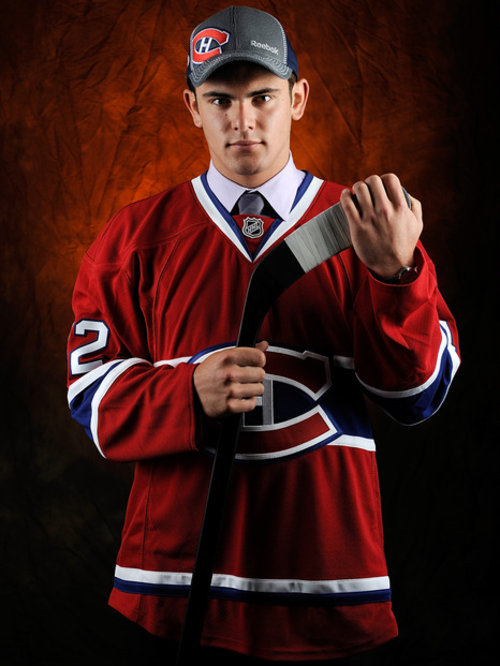 Brady Vail has actually risen quite a lot already, ranking 33rd in our list last year while not getting a ranking from a full third of the panel, he jumped all the way up to 27th this year with half of us putting him in the top 25. Vail likely could have jumped even higher if he had kept up his early season pace, as he was at a point per game for half of the season in the OHL.

After 40 games, Vail had 36 points and 13 goals, but a shift to defense for a stretch and then a bigger focus on playing defense cut those numbers down a bit, and he ended up scoring fewer goals than his draft year.

There is positive news for Vail though, as they way he was used was as a premier shutdown guy. He was one of the only players to shut down Alex Galchenyuk during his torrid scoring pace for Sarnia early in the year, and at the conclusion of the season was voted the second best defensive forward in the OHL by coaches around the league.

Vail also got his first action as a pro this season as Windsor didn't make the playoffs and he joined the Bulldogs to end the year. Four points in 12 AHL games isn't too bad for a guy one year out of his draft who isn't supposed to be an offensive producer, and notching his first pro goal was a nice way to end his season.

Vail's offensive talent is definitely in question according to scouts, though. Corey Pronman had this to say about him going into the 2012 NHL Entry Draft:

Vail is a very safe prospect going into this draft, as he has average to slightly above-average upside, but tremendous intangibles on top of having the versatility to play all the forward positions and all situations. Vail is a hustle-and-heart type of prospect whose legs are consistently moving throughout his shifts and he shows equal effort at both ends of the rink. Vail's frame is a tad small, but he's very aggressive and throws his weight around regularly. He's one of those pesky forecheckers and penalty killers that really annoy the opposing team, which makes him a fan favorite. Vail has average offensive skill and can make plays with the puck here and there but he doesn't show impressive puck possession ability in any aspect. He's a smart player who doesn't turn the puck over and has fine two-way instincts. In the pro game, he'll be a north-south type of player who won't just chuck pucks in but rather will make a one-touch pass or a little move to protect the puck before cycling it. He's a below-average skater, as he has decent strength in his push-offs but his stride and technique look off as he doesn't extend properly and has trouble generating smooth, efficient movements.