The addition of Al Montoya to the goalie hierarchy will have a knock-on effect on the farm.

Share All sharing options for: Forecasting the 2016-17 St. John's IceCaps: The Goalies

At the conclusion of the 2015-16 season it appeared as though the hierarchy in the Montreal Canadiens goaltender depth was finally going to settle down.

The season started with Carey Price and Mike Condon in the NHL, Dustin Tokarski and Zachary Fucale in the AHL, and Eddie Pasquale in the ECHL, but an injury to the previous season's Hart Trophy winner quickly put an end to that distribution.

By the end of the season, Condon had valiantly attempted to carry the Habs on his back for the majority of the season, but ultimately was over-extended. A recall of Tokarski to back up Condon meant that Fucale was suddenly thrust too soon into the starter role in the AHL, paralleling Condon's situation, and his on-ice struggles as well. It also forced a recall for AHL-contracted Pasquale from the ECHL.

Ironically, it ended up being Pasquale who had the most stable season out of all the goaltenders in the organization, dragging the IceCaps to numerous wins, and earning Head Coach Sylvain Lefebvre's trust down the stretch as the team was hopelessly chasing the last playoff spot.

By the end of the season, Tokarski, Pasquale, and even the desperate stop-gap of Ben Scrivens were gone: the first via trade, the latter two via end of contract. Yet things have gotten a bit more complex on the depth chart, as two new additions to the organizational depth chart are rocking the boat.

Charlie Lindgren was probably the most-sought-after free-agent goaltender coming out of the NCAA this season, and it was the Canadiens who managed to snag his services by signing him to a two-year entry-level contract that started immediately. This means that this season will be a contract year for him. Lindgren played one game for the Canadiens last season, and look pretty good in what ended up being his first NHL victory. He impressed again at development camp this summer, showing flashes of why he was pursued so intensely when his NCAA career ended. His arrival into the organization poses a serious threat to Fucale's station. 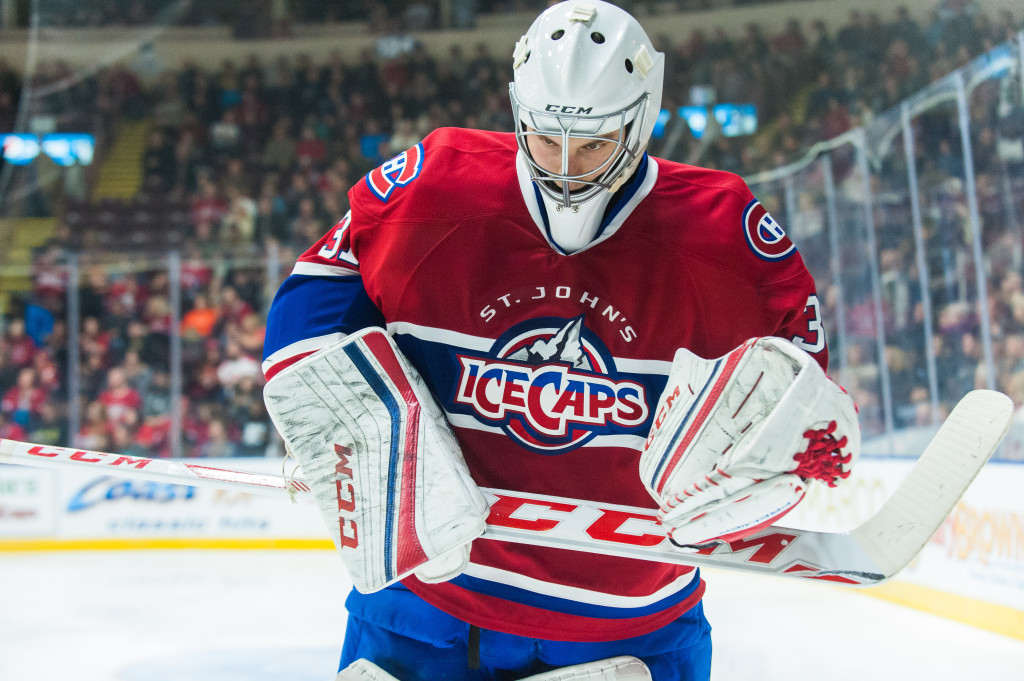 Fucale will need to have a bounce-back season as his rookie campaign has to be considered below expectation, despite the starter role he wasn't ready for. He will need to learn to control his lateral movement, which frequently caused him to be out-of-position for rebounds. The foundation is there as he possesses remarkable reflexes, and can make very acrobatic saves, but he obviously had a hard time dealing with the pressure, and was quickly rattled if he let in a goal. Fucale is running out of time with the organization to prove his NHL pedigree.

Michael McNiven, signed out of rookie camp last season after going in on a tryout basis, is expected to spend one more season in the junior ranks before making his professional debut, however he could be an emergency call-up to the AHL if needed this season.

Higher up the depth chart, the addition of Al Montoya creates an oversupply of backups at the NHL level, but it's difficult to imagine either Condon or Montoya accepting an AHL demotion at this point, even though it would be the best case scenario for the IceCaps. Additionally both are eligible for waivers, and therefore could be lost if a transfer is initiated.

It is equally unlikely that one of Fucale or Lindgren would be assigned to the ECHL, therefore there is one surplus goalie who might have to leave the organization. If anyone is the odd man out at this point, it would probably be Condon, who would lose the NHL backup job to Montoya and subsequently leave the team, while Lindgren is groomed with Fucale in the AHL as the next backup.