For the love of the game, highlights from a conversation with Magnus Nygren

Magnus Nyström's podcast is usually is about an hour long, profiling players on both sides of the pond. He did one this summer with the new captain of Färjestad, Magnus Nygren.

Share All sharing options for: For the love of the game, highlights from a conversation with Magnus Nygren

During the summer most players travel to their offseason homes, and whether in Europe or North America, they go home to relax and recharge the batteries.

Some players are away longer than others, but one thing is certain: during the offseason reporters can get closer to them and being away from the NHL spotlight creates more opportunities for some candid and interesting conversations. Magnus Nyström of the Swedish paper Expressen is one such reporter.

Nyström is good; he gets the players to relax and tell different stories about life and experiences outside the rink. For example, Hedman's interview focused on moving to a new country at an early age, the difference in responsibilities between clubs in NHL and Sweden, and a variety of other interesting subjects.

A transcript of the Nygren podcast is about 20-25 pages, so for the sake of brevity, I chose to pull some highlights. First and foremost, Nygren loves hockey.

"It's for the love of the game. I love to watch hockey, and I mean ALL hockey. If we (Lisa, his girlfriend) are home for the weekend I can travel out to Forshaga and watch a division one game. I think that's fun, to watch some friends play, grab a hot dog and just watch.

If you ask Lisa what we watch on TV she'll give you one answer; it's ice hockey. I'll watch an Allsvenskan game, another SHL game, some NHL, and a bad stream of a game somewhere in Russia." 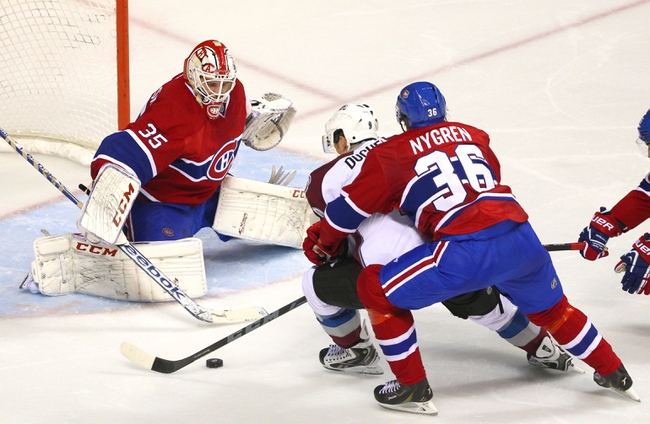 Nygren is widely hailed as the best off-season signing in Sweden this year, a player that chose home over money as there were some high offers from the KHL and continental Europe; but he is also there to bring Färjestad back to the playoffs, seeing as last season they missed the cut for the first time since 1994.

Magnus started practicing his slap shot on his parents' garage door when he got home from school, because no one was home yet to tell him not to. Consequently, he destroyed it. He has since bought his parents a new garage door, but it is rusting away as they haven't changed it yet.

Nygren wasn't able to watch the NHL much growing up, just catching a few highlights before school, hence he grew up a staunch Färjestad supporter, which made it an easy decision to return.

He mentions that he had great support from his parents growing up, and the would have supported him in whatever career he chose. "My parents would have driven me to dance class if I had chosen that." And today he feels bad for kids who have overbearing parents at an early age, "a kid's eyes should shine when they do something. If they aren't happy at 11 how can you think they'll be happy doing it when they are 20?"

Nygren struggled as a child, he was a reserve in high school, and was invited to his first national team meeting as a reserve as well. When he got a chance in Färjestad he was given time on the powerplay, and in his own words, "I think they just focused in the box to mark the other four, and let the kid have the puck at the blue line. In the beginning I tried to set the others up with nice passes, but that didn't work. The others then told me to shoot whenever I got the chance, and the pucks started to go in."

When it comes to the NHL he says that he might not have taken all the chances he received, and that he really wanted to continue to play last season. He might have started to practice too soon after his concussion, and that probably hurt his North American career. His main concern isn't whether or not he could have made the NHL, but rather the injury itself, stating it destroyed much more than just hockey aspirations.

"There is more to life than the NHL," says Nygren, while also proclaiming, "I have not closed the door on possibly returning."

In our trip through Europe we are back in Sweden, but this time in Stockholm, catching up with Lukas Vejdemo. Unfortunately Lukas and I couldn't meet up in Stockholm when I was there, as he was at the Lake Placid training camp, which led to a chat over the phone.

The hit that took him out was an elbow to the chin, but Nygren firmly believe that it was a second hit, that took place on non-flexible plexiglass, that ended up having the biggest impact. He goes on to talk about the new versus old plexiglass, comparing the new glass to a trampoline, or a bouncy castle, whereas the old is more like hitting a concrete wall.

Finally, in February he met with a doctor that explained that he needed to go home, which would encourage the body and the subconscious mind to accept that the season was over, and it was time to recover properly. He is symptom-free now, and there are no workout restrictions in play anymore.

Färjestad named Nygren the captain for the upcoming season, but he's taking the honour in stride.

"You don't practice to become a captain or assistant coach; the only three letters that matter are the F-B-K that we all have on our chest".  He'll now lead the former captain of the team, but expresses that everyone is a leader, and he'll "just be the guy with the 'C' on my chest."

Clearly, Nygren is excited to get back to the rink.

"I'm like a child. I haven't played hockey since November 29th, and I have a fire burning inside me to play again!"

While Nygren will play for one of the classic Swedish teams, one of Frölunda's main competitors, and a true derby rival, I wish him nothing but the best. A good player returning to the ice is the best thing for the game that we all love.