Share All sharing options for: Enduring the 2008-09 Habs: Part II — A tragic analogy 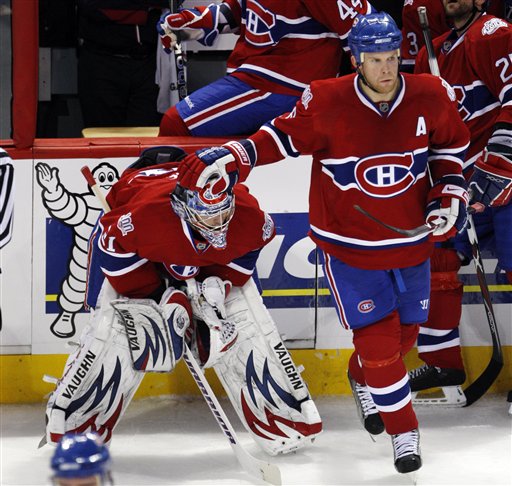 An anology for the 2008-09 Canadiens slapped me in the face a few days ago. It's a horrifying unfolding about a known family around my neck of the woods.

There is this gentleman I know of, who has a beautiful family, a good wife and three kids. Within ten days, a compression of incidents had befallen them all.

First, the wife's mother was killed in a car accident. Two days later, a fire next door to the husband's business caused it to be shut down. Then, mercilessly, the woman was laid off from her longtime job on the same day that they found out that their four year old boy needs surgery to repair a small hole in his heart.

The couple's nerves must be at wit's end. Their hearts ripped open.

The husband, who is an only child, was likely in some kind of emotional wilderness, when he happened to meet up with an old girlfriend, and harmlessly poured his heart out to her. Someone saw them in a restaurant, hugging as they parted, and told his wife about it.

With nerves and emotions frayed, a misunderstanding ensued, and she threw him out of their house.

I've thought about them a whole lot today, wondering whether this story simply puts my hockey fetish into perspective, or if it also serves to shed some understanding into what happens to the core of any existing, breathing entity when events which we have no control over converge and conspire insidiously to reduce that entity into a shamble of what it once was.

Sometimes, being harsh and rash in judgement obliterates all the good things that are usually noticeable when things go well.

For four seasons out of five, the Canadiens as a team and an organization have steadily progressed. The 2008-09 season has been an aberration, a setback best explained by unforeseen circumstance more than by a failing on anyone's part.

There will now be tons upon tons of blame pilled onto to the Canadiens players, coaches, and brains for a season that got away.

The worst of it is, I don't believe that there is any one single thing to blame, set apart from events no one could stop from happening. Like the marriage mentioned above, who in that couple had power over circumstance and destiny?