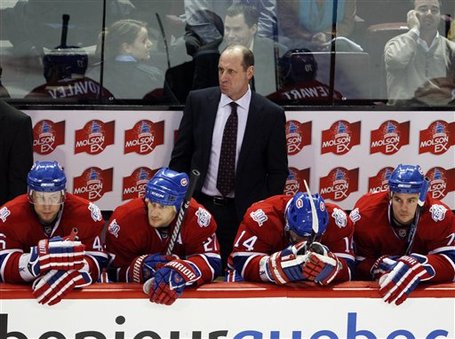 There is about five minutes to go in the second period as I begin to write this.

Phil Kessel has just scored coming out of the penalty box to make it 3-1 for Boston and Michael Ryder has added his second goal of the game.

Goals, excruciating slices, being exactly the knives they ought to be, in this disappointing season.

Replays are now showing that Kessel's backbreaking goal was offside, as fans jeer Carey Price for a routine save, and he reacts as Patrick Roy did a decade or so earlier in a similar situation.

Now, the Canadiens have just received that gnawing delay of game call for shooting the puck over the glass.

How much more can a fan take.

I hate that rule, just like fans of 29 other teams do. I hate how this whole entire season feels like a set up. A joke, and I'm the punch line.

I can feel a world of Habs haters laughing away. We've had our moments. They are now having theirs. I understand this. But I am empty, angry, and for a few moments, unconsolable. 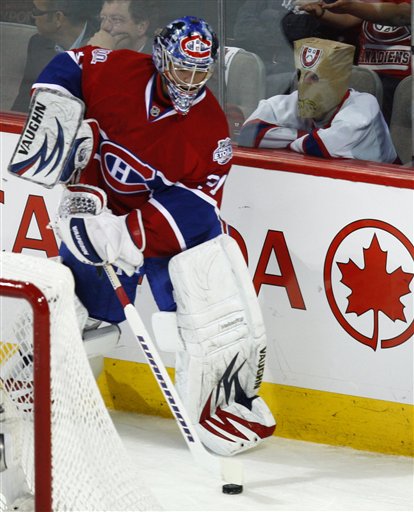 I'll empty my present thoughts when I return, let the beers chill, then go for my usual late evening coffee with friends. I'll take a beating from them, as I will put on my Habs hoodie for the last time this season. I know that I will return home and type out my thoughts until the sun comes up, as I usually do. Only this time, it might feel more like an exorcism.

Now back at home, I'm tempted to turn the game back on to see if the Canadiens are making some kind of miraculous rebirth, but I'd be kidding myself.

I know that the top seed Bruins have eliminated the eighth seed Canadiens in four straight, as it probably should be. The Bruins are a powerhouse, and they have steamrolled the Canadiens flat. It would have been more interesting had Montreal been at their best, but that's hardly a consolation.

It is almost a relief that it is over, speaking strictly for myself. It had gotten painstakingly grueling to write about mounting losses, explaining to myself fand disecting or others things that went wrong that no one saw coming, dealing with cumulative blows to the team, and generally keeping my head above water after each hit in order to put up something sensible here for others to read and discuss.

It's not easy to keep an even keel at times, and maintaining a consistent and fair perspective has gotten tested severely since January.

As much as I feel frustration, I feel relief that it is over.

I've turned the TV back on now, unable to help myself.

The score is still 4-1 Boston.

The loss and humiliation almost makes me wish I was not such a die hard fan. I'd rather be just a casual fan right now. The feeling stems from two grating realities: As me, I'm tasked with writing about it, which is hell; and as a fan, I don't entirely wish to be lumped in with the knucklehead fans who booed the U.S. anthem two days ago, and who jeered Carey in this final game.

Twenty four Stanley Cups wins - 9 of which I've seen - is a shield for such grim realities that gets thinner with each passing disappointment.

At eleven o'clock, I'm finally calm and enjoying a coffee. My late night coffee stop is the Fifth Wheel Truck stop in Cornwall, just off the 401 highway, a daily haunt an hour west of Montreal. My friends are just leaving, when who should stop in but three Bruins fans, heading back to someplace called Haliburton, Ontario.

I'm one of six patrons in the place at this hour, and they spot me like Ryder sees Hab open net. Of course, they just have to sit right next to me. Their names are Justin, Blake and Clem - all three donned in Bruins colours.

Clem is the father of the two boys, and he's wearing a Ray Bourque jersey, grinning at me like a Chesire cat about to have his cream. An hour or so after the game, these boys and their old man were still pumped. They sat down and glanced my way. I turned to Blake - feeling like an obvious target of complete strangers - and gave his Bruins big kudos for kicking Hab ass.

It was done in honesty, respect and fear, I'll admit - these guys were huge!

I endured a few minutes of beachball goalie taunts, history is history proclamations, and a whole lot of Lucic kayowing Komisarek bullishness. One smartass make a crack about centennial brooms.

I asked where they were from and how long they were Bruins fans.

"Since my Dad played with Bobby Orr", one of the sons said.

Turns out Clem is from Parry Sound, and he was a team mate of Orr's at age nine. So he says. And I was Phil Esposito in street hockey, circa 1973.

I quizzed Clem on it, and it held up. Bobby was shy, and Clem said he wished he had a better story to tell, while looking me in the eye, but he wasn't much of a player himself.

There were no boasts or b.s. in Clem's tone, he just said that all of Parry Sound became Bruins fans in 1970.

It was then that I told him that I was a blogger for a Canadiens fan site. He told me they were still on dial up in Haliburton, I felt irrelevant as can be, explaining what I did.

I asked about the game, and he told me that Habs fans were giving them the ride for a good ten minutes, then melted like snowflakes on a Daytona beach.

The three of them gulped their burgers down faster than you could say "sweep". My playoff hockey pool (I'm 3 points out of first) involves the Fifth Wheel's midnight shift manager, and I was discussing the Flames and Blackhawks game as the three man left.

I went to pay my bill upon leaving, and the waitress informed me they covered my coffee and mozza sticks. On my bill they wrote, "Show up next time, CH loser."

It made coming home and reaching for those chilled beers, all that much more neccessary.

Drunk blogging after a heart wrenching, season ending loss. There's nothing like it.

I turn on the TV and see Komisarek getting flattened. I turn it off.

For the first time in years, I wish I wasn't a Habs fan.

But I can't help it.

The city of Boston were treated to an all time classic Bruce Springsteen show. He covered the Ramones "I Wanna Be Sedated".

As a Habs and Boss fan, what I needed most on this night, happened in Boston.