Canadiens announce their alternate captains, no one will wear the C

The team took the opportunity to announce their new crop of leaders at the annual golf tournament.

Share All sharing options for: Canadiens announce their alternate captains, no one will wear the C

The Habs announced this morning that they will head into the 2014-15 season without a captain. Instead, they will rotate the alternate captain duties between veterans Andrei Markov & Tomas Plekanec. Joining the two veterans are young stars Max Pacioretty and P.K. Subban.

Teams can only give letters to three players, so I assume they'll rotate between the four nominated leaders. Considering this is a transition year due to the departure of captain Brian Gionta and alternate captain Josh Gorges, heading into the year with four players sharing the leadership role may end up being the best call, as to avoid heaping too much pressure on any of the individual players.

None of the players announced should come as a surprise, as all four of them were considered to be the finalist for the captaincy. 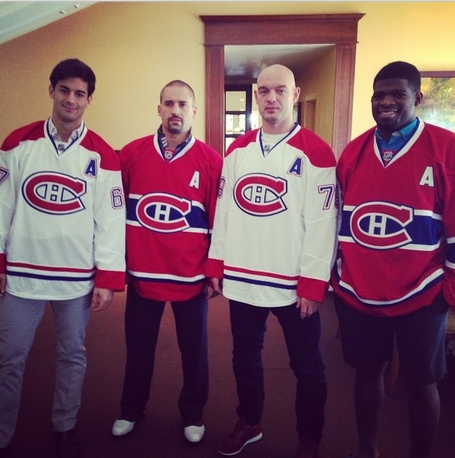 Update: Tomas Plekanec and Andrei Markov will wear the letters on their jerseys all year, whilst PK Subban and Max Pacioretty alternate throughout the year.

P.K. Subban will wear an A at home and Max Pacioretty will wear one on the road. They'll switch after 41 games.

You can watch the alternate captain interviews live on RDS.ca by clicking here.