Marc Bergevin finishes second in the General Manager of the Year Award.

In only his second season at the helm of the Habs, Bergevin almost brought home an award.

Share All sharing options for: Marc Bergevin finishes second in the General Manager of the Year Award.

The NHL awards took place tonight, and the Habs general manager was unfortunately the runner up for the GM of the year award.

The award was presented by P.K. Subban, Ryan Getzlaf and Dustin Brown.

Bergevin's best moves in his two-year tenure include signing sniper Max Pacioretty to a ridiculously cheap deal, and of course, his work at the trade deadline this year.

Bergevin managed to snag two big pieces, including elite forward Thomas Vanek. Vanek, who was rumoured to cost a first-round pick and an NHL ready prospect, ended up costing Bergevin a second-round pick and Sebastian Collberg. Bergevin even managed to get a fifth-round pick in return. God bless Garth Snow.

He also put his hands on Mike Weaver, who was an important cog in the playoff run, and filled a need as the Habs desperately needed players that can perform the RD role.

Take a look at our two-year review of Bergevin's work here.

Congrats Bergy! Now, get some rest before the draft. 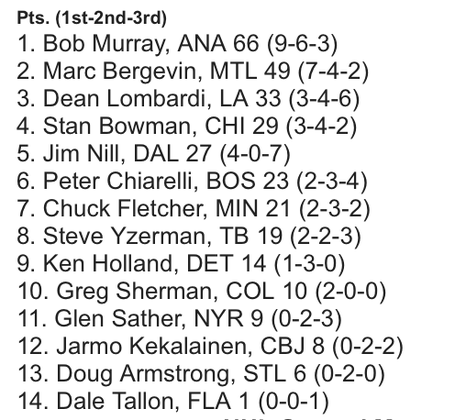