After coming under constant criticism in his first year at the helm in Hamilton, it seems like an improved roster and more experience has Lefebvre figuring things out a little bit.

Share All sharing options for: Is Sylvain Lefebvre becoming a good coach?

Last season the Hamilton Bulldogs began the year with a stacked, veteran top line of Aaron Palushaj, Blake Geoffrion, and Louis Leblanc. The combination of age and talent on the line could have been the best in the AHL, but it wasn't to be. Leblanc went down early with an ankle sprain that hobbled his entire season, Geoffrion suffered a fluke injury that ended up causing him to retire, and Palushaj was lost to the waiver wire.

Without the top end veterans to insulate a team full of rookie defensemen and generally weak offensive players, the Bulldogs crumbled to a dismal 29-41-6 record, with most wins coming on the back of superb goaltending.

Even the players Lefebvre did have weren't producing anywhere near their career averages, with most of them putting up the worst seasons of their respective careers. Confusing decisions like putting Patrick Holland at center and Michael Bournival on the wing were met with mockery, and things got worse for Lefebvre when one of his only possession positive players in Joonas Nattinen went down with a season-ending injury.

Fast forward to this season

After being a healthy scratch for the Hamilton Bulldogs to start the season, Morgan Ellis has fit in nicely on the 'Dogs blue line.

For awhile, not much changed for Hamilton. The curious usage was still there, with Lefebvre pigeonholing his best forward in Louis Leblanc on the third line with Nick Tarnasky and Maxime Macenauer, a goon and an ECHL scorer who seems unable to translate his game to the AHL level.

There are still some odd choices, like Macenauer on every powerplay and still centering a line with talented players on it, but every coach seems to have their own weird favourite. The point is that it looks like Lefebvre is making progress, and not just on a personnel usage basis.

Josh Weissbock has been using a formula to calculate estimated possession numbers for AHL teams, which he claims has a 94% correlation rate with the hard numbers. I asked him to run the numbers for Hamilton, here's what they look like. 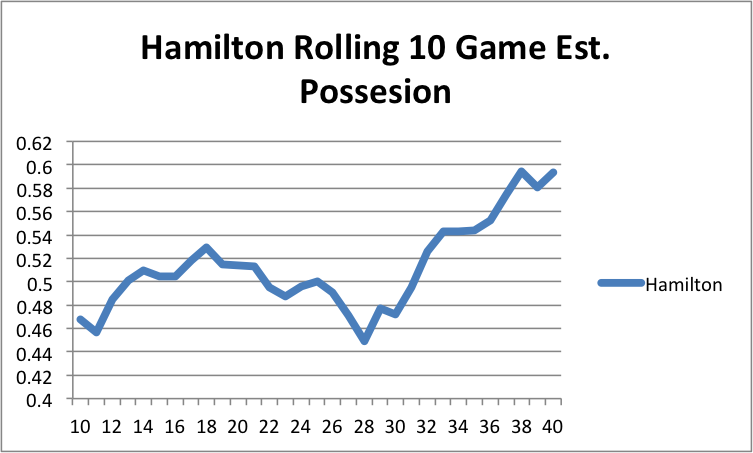 Granted, this is a very small sample size, with the Bulldogs really only clicking for the previous 12 games or so, but this is something that we never saw from Lefebvre last season. And to boot, he even has the Bulldogs up to a solid league rank by these metrics. 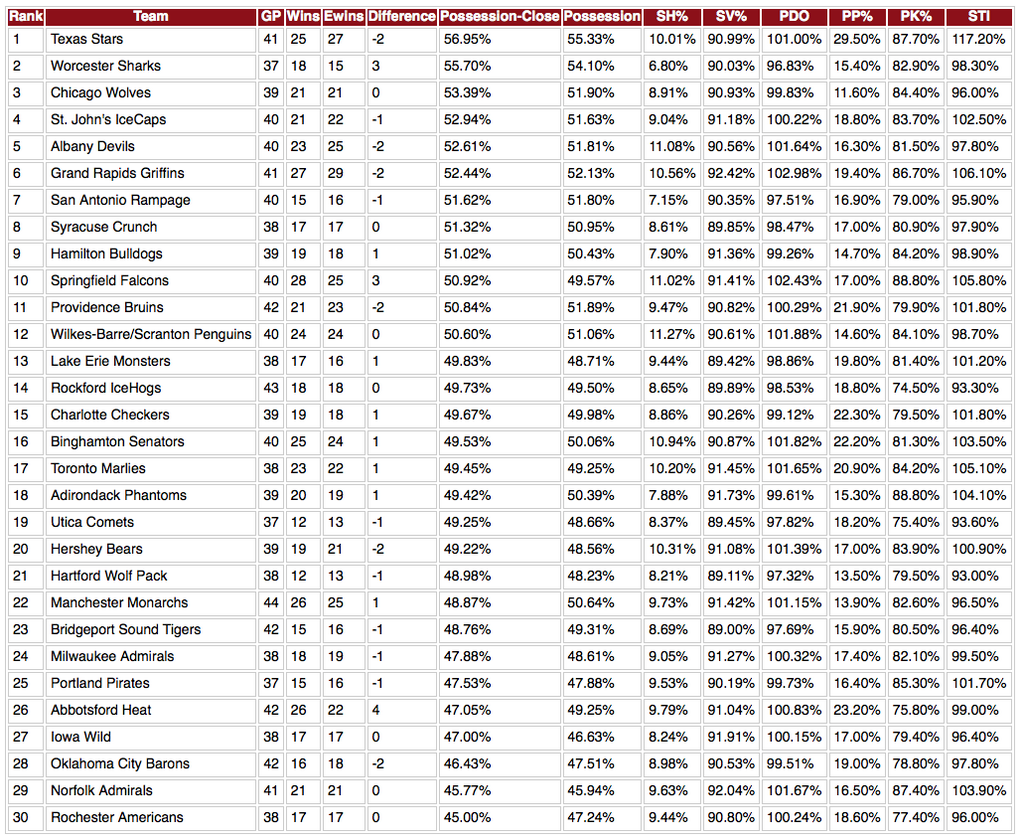 There are still some issues

Lefebvre's team still has serious trouble generating offense for some unknown reason. His team is shooting at just 7.71% overall, which if they were an NHL team, would tie them for 3rd last in the league. They had the same problem last year, shooting at just 7.42%.

It's possible that the low shooting percentage is a talent issue, but that wouldn't explain players like Leblanc, Dumont, Brendan Gallagher, Bournival, and Thomas shooting at career lows under his tutelage.

With players like Andrighetto, Holland, Blunden, St. Pierre, and Nattinen filling out forward spots, it really shouldn't be this difficult to score goals at the AHL level.

What fans need to remember though, is how green Sylvain Lefebvre really is. This is his second season being a head coach. Not in the AHL, but anywhere. He spent three years as an assistant in Colorado under the incompetent Joe Sacco, and two years as an assistant in Lake Erie. That's very minimal experience for a head coach, which Canadiens fans experienced first hand with Guy Carbonneau.

The Canadiens are playing the long game with Lefebvre, who by all accounts is an intelligent and engaging hockey man. It's going to take time for him to grasp everything needed to become an NHL level head coach, especially a good one, but seeing improvement is a positive step forward.