Bulldogs players are ready to put last season behind them, and just play hockey.

Share All sharing options for: Hamilton Bulldogs eager to get season started

For returning faces to the Hamilton Bulldogs this season, last season is a distant memory, yet a painful reminder. A reminder of what it feels like to have scored the fewest goals in the AHL, and finish dead last in the overall league standings.

This year's team however, brings another year of experience and adversity to the table. There has been plenty of optimism from those around the organization, and it's no secret that the players themselves appear to have an added jump in their step this training camp.

"Last year we didn't have the year we wanted," said defenceman Morgan Ellis. "So this year we want to turn it around obviously and I think it’s a good start so far."

Ellis, ranked 16th on EOTP's 2013 Habs Top 25 Under 25, is entering his second year with Bulldogs and will be expected to bring more consistency to the blueline this season.

Ellis says he has been impressed with the physicality and compete level in training camp so far. Also mentioning that with players like defenceman Jarred Tinordi up with the Montreal Canadiens, there is an added dose of competition on defence.

Another familiar face at training camp is goaltender Dustin Tokarski. Tokarski, who was recently sent down from Montreal's training camp this past week, is looking to step into more of a leadership role for Hamilton this season.

"I’m 24 years old, you got to make a statement this year in the room, on the ice, and show that I’m ready to potentially make the next step," said Tokarski. "I’m here for the guys to be a leader, go out there and try to steal some games for the guys and have them believe in me and try and get the team around me better." 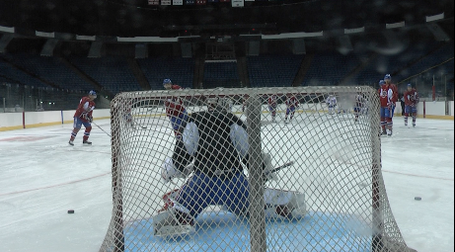 There is no denying the quantity of talent that the Bulldogs will have in their lineup this season. There is also no denying the expectations that the players have put on themselves.

"I think our whole team has high expectations, the coaches do," said Tokarski. "We brought in some good players this off-season and it looks like guys have worked hard to get better and looking forward to making a push to the playoffs this year."

What kind of expectations do you have for the Bulldogs this season? Who do you expect to step up?