Looks like someone let the Dogs out in Montreal...

Share All sharing options for: Bulldogs Returning to the Bell Centre in 2013-2014 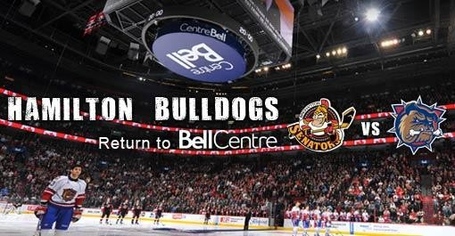 On Friday September 20th the Hamilton Bulldogs announced that they would be playing two regular season games at the Bell Centre in Montreal against the Binghamton Senators and the Syracuse Crunch. Also released today was information regarding ticket prices and sale dates.

MONTREAL, QUEBEC – The Hamilton Bulldogs announced today the team will play two regular season home games at Bell Centre in Montreal, Quebec, home of their National Hockey League affiliate, the Montreal Canadiens, in 2013-2014. Hamilton will clash with the Syracuse Crunch, American Hockey League affiliate of the Tampa Bay Lightning, on Friday, November 22nd at 7:30 p.m. The Bulldogs will battle the Binghamton Senators, AHL affiliate of the Ottawa Senators, on Friday February 21st, 2014 at 7:30 p.m.

The contests will be the Bulldogs’ 11th and 12th at Bell Centre, dating back to 2007. Hamilton has a 5-5 record in Montreal.

If you live in the Montreal area this is a great chance to watch a group of fantastic Habs prospects play the greatest game on earth at a highly reasonable price.