For the second year running, EOTP's consensus #1 Top 25 Under 25 selection is none other than world-class beet farmer and Liga Süpahappifunbäal goal-scoring phenom, Sprague Ribinsoin of Glöorpf HK.

As noted in last year's T25U25 piece, Sprague qualifies for inclusion in the vote despite technically being 28 years old. The reasons for this remain complex and likely beyond the grasp of most everyone in the world. Contributing factors include differing time zones, currency exchange rates, London Interbank Offered Rate (LIBOR) variances, and a temperamental light switch in the German Bundestag's second-floor utility closet. As it stands, Sprague has regressed to 23 years of age by North American standards, well within the T25U25's rigorous guidelines. With this in mind, thoughtful and accommodating EOTP readers should feel free to move right along to the next paragraph as there is clearly nothing to see here. Sprague had largely been forgotten by the hockey world, after six years prior abandoning a promising junior career with the Snug Harbour Malign of the OMJHL to pursue a doctorate in quantum physics in Europe. A left-winger with the Malign, Sprague tallied an impressive 47,003 goals and zero assists in eight games in 2005-06, after missing most of the season with a self-diagnosed case of Bieber Fever (ref. bieberus feveratum).

Returning to hockey with Glöorpf HK of the Swiss Liga Süpahappifunbäal for the 2012-13 season, Sprague picked up where he had left off, potting 237 goals in 37 regular season games, subsequently scoring 107 goals in 11 playoff matchups - including one game where he tended goal - and inspiring Glöorpf head coach Skaär van der Gaärnaärdaärhaärlaärnaärjaärensensensensensensensen to deem Sprague, "the clutchiest clutch clutcher to ever clutch the clutchingly clutched clutch, clutch-wise".

Ribinsoin's output in 2013-14 was even more impressive, with the young sniper scoring 2,991 goals in 40 regular season games, following which he added an additional 966 goals in 12 post-season matchups. In a potentially misguided effort to become a more "complete" player, Sprague also earned 355 fighting majors and a hair over 2,000 penalty minutes during the regular season, though somehow managed to avoid the sin bin during the playoffs.

Unfortunately, despite a regular season performance that saw Sprague average just under 75 goals per game, he was unable to secure enough votes for the Dagstüurp Pfläardfüug Memorial Trophy, awarded annually to the Liga Süpahappifunbäal's regular season MVP. In translated comments regarding Ribinsoin's inability to win the "Dag" in his first two Liga Süpa seasons, Glöorpf Gazette sports columnist Jäak Fraůdd noted, "...highly placed officials in the Liga wouldn't talk to me if their life depended on it, so I've nothing to add. Absolutely nothing. Zip-a-reeno."

When all is said and done, none of this really matters; the kid scores goals. A lot of goals. Shitloads. And, at the end of the day, that's all that should count for Hab fans hungering for a bona fide scoring machine, one who hopefully will eventually crack the Montreal lineup. 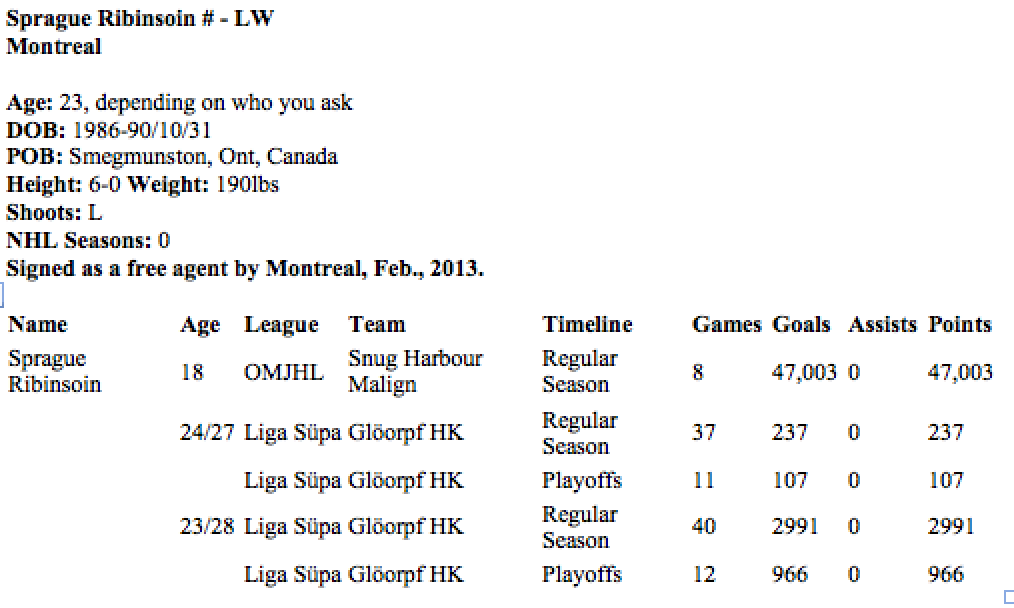 As was the case for the 2013 edition of the T25U25, Sprague Ribinsoin was virtually the consensus number one pick this year, with the only dissenting opinion coming from Marc Dumont, who ranked Sprague 785th (337th in 2013). This was largely the result of not only a personal grudge, the genesis of which Marc continues to refuse to discuss, but, as well, a recent and very unfortunate run-in with Ribinsoin at an Interstate IHOP just outside picturesque Albany, New York. Ribinsoin is all about scoring. Pure, undistilled scorage galore. On any given night, Sprague turns on more red lights than all the Roxannes in Amsterdam. Why, Sprague can put away more biscuits than a thousand bongwatered Cookie Monsters in a Nabisco factory running 24-7.

Scoring goals is, however, all that Sprague brings to the table, as he is thoroughly inadequate in all other aspects of the game, be it shooting, skating, puckhandling, passing, hitting, forechecking, backchecking, and changing on the fly. He can't chirp opponents for shit and is unable to even lace his own skates. But, as has been the case throughout Ribinsoin's hockey life, nobody really gives a flying rat's festering ass. The kid scores many goals. Many, many, many, many, many, many, many, many goals. Why, if Sprague had any more goals, Tony Robbins would be watching his self-help infomercials.

Believing he needs a more complete and balanced game if he is ever to break into the NHL, Sprague has, as previously alluded to, attempted to become the Liga's most feared enforcer. He spent most of last offseason training at former Liga Süpahappifunbäal great Tk Vr's ice sports facility in Shitterton-On-Wetwangtittyhill, England, under the watchful guidance of broadly misunderstood NHL pugilist Alexander Semin.

Results ended up somewhat uneven during the 2013-14 season, with Sprague's fight card an underwhelming 1-354, his sole, razor-thin-margin-of-victory win coming at the expense of a frail, elderly spectator whose walker was unfortunately sporting a sticker in support of Võg Dzt SC, Glöorpf's main Liga Süpahappifunbäal rival. An enraged Ribinsoin was compelled to jump the glass and sucker punch the unwitting, recently retired nun.

Although Sprague grew up idolizing Sergei Kostitsyn - he was technically 11 years old when the feisty Belarusian winger was selected by the Habs in the 7th round of the 2005 Entry Draft - and had modelled his off-ice behaviour after the ex-NHLer, he recently switched allegiances after becoming enamoured with the inspiring off-ice example set by another former NHL player, Sean Avery. We continue to question why this is being included in the "Strengths" section. As noted in last year's piece, Sprague is a textbook puck-hog, largely borne of the fear he may one day be awarded an assist, which would ostensibly invite comparisons to his legendary father, Larry Ribinsoin, a man he deeply loathes. Sprague never ever passes the puck and, more often than not, is compelled to simply turn it over in the O-zone, rather than face the risk of an errant pass. When under considerable pressure, Ribinsoin is not shy to attempt an outlet pass to an opposing winger.

Compounding this dysfunctional, Sprague-first attitude is the simple reality that the guy is a pouting, whiny fuck who is divisive in the room and genuinely despised by the coaching staff, management, fans, media, as well as his immediate family. Sprague is also reportedly deeply hated by God.

Most recently, Ribinsoin was the featured cover spread on the August issue of Jerkfaces' Quarterly

Ribinsoin's projected 70-80 goals per game in the Liga Süpahappifunbäal is expected to translate into 40-50 goals per game in the NHL, a possibility that has caught the attention of more than a few of the league's executives, and is the kind of production that could see Sprague earn a look during the upcoming pre-season.

The emerging consensus view is that Sprague Ribinsoin is all but a lock to beat Wayne Gretzky's NHL record 50 goals in 39 games, potentially in his first regular-season game. During a recent interview, former NHLer and Montreal Canadiens forward Alex Kovalev noted, "This kid thinks he's so great. He isn't. I am. They will probably give him all the money they should give to me. Hey you! Guy with microphone! Give me all your money! Wait! All of you! Empty your pockets! For I am Kovalev!"

We think it's fair to say the organization could really benefit from a player able to consistently score 40-50 goals per game, as we believe that is a lot of goals, and are looking forward to what Sprague Ribinsoin brings during the upcoming pre-season, should he be given the opportunity.

The Infamy of Sprague Ribinsoin