In the spring of 2014, Nathan Beaulieu finally seemed to make the breakthrough we've been expecting with the Canadiens, playing ahead of veterans and taking a regular shift in the playoffs. Will he get a chance at a permanent roster spot in 2014-15, and can he develop into a top defender within a couple of seasons?

It's Nathan Beaulieu's time. Montreal's first round draft pick in 2011 seems to have finally earned enough trust within the organization to get a legitimate chance at a full-time roster spot this fall, following a solid playoff performance and frequent call-ups from the American Hockey League throughout the 2013-14 season. Due to the status of his contract, a poor showing in training camp could change that quickly and give another young prospect a shot (probably in the form of Jarred Tinordi, our fourth ranked player on this list), but Beaulieu legitimately seems to be in the front runner's seat here in early September to slot into the open spot on the left side of Montreal's defence, along with Andrei Markov and Alexei Emelin.

How did he get to this point? After a brilliant, and blessed QMJHL career that saw him consistently competing for the league title and national title as well, Beaulieu had to endure the shock of playing top four minutes for the worst team in the American Hockey League in 2012-13. Beaulieu was frequently pointed out by our Hamilton Bulldogs correspondents as the team's best player that year, and he was rewarded with a couple of brief callups. However, when an opening on the defence emerged for the playoffs, it was Tinordi who got the call over Beaulieu and Greg Pateryn. This past year, however, the roles reversed: a slow start for Tinordi got Beaulieu a lot of early recalls, and over the course of the full season (another tough one for Hamilton), Beaulieu won out as the call-up when Michel Therrien lost the trust of veterans Francis Bouillon and Douglas Murray, and Alexei Emelin got injured.

Beaulieu looked shaky at times, but in a series in which the Canadiens were badly outplayed, Beaulieu managed a positive Corsi rating and blew the rest of his teammates away in terms of Relative Corsi. It was in a very protective setting (lowest Quality of Competition, highest offensive zone start rate), but Beaulieu didn't disappoint which was all that was being asked for in that situation. To make it as a regular, those minutes will have to get tougher.

His performance in callups seems to suggest he will be able to do that. We don't have a lot of data for Beaulieu available, but his performance in With or Without You metrics over the past two years has a nice feel to it (numbers acquired from Hockey Analysis):

You don't want to read too much into a sample this small, but over his regular season NHL career to date (again, both 2013 and 2013-14 seasons are included here) he's spent 65% of it with either Francis Bouillon or Douglas Murray as his partner, two guys that we've spent a lot of time showing have been on the way out of the league in this timeframe. The 49.1% Corsi number is obviously closer to his real talent level than the 62.3% in just under 100 minutes of 5 on 5 play away from those two veterans, but the early numbers have a nice feel for a guy trying to learn on the fly in the NHL.

That's enough fancy stats for now, since there isn't enough data to really go much deeper.

A couple of things here: for the first time, Beaulieu received unanimous support for being the top defenceman on this list, taking over from P.K. Subban for that honour. Not only that, but it was the first time everyone had him ahead of Jarred Tinordi, which used to be a point of contention on the panel. I joked on Twitter during the playoffs that any vote that had Tinordi above Beaulieu would be discarded, and the panel delivered.

As if you didn't already know it, but Laura is a bit of a jerk here, not giving Beaulieu a top 3 vote. 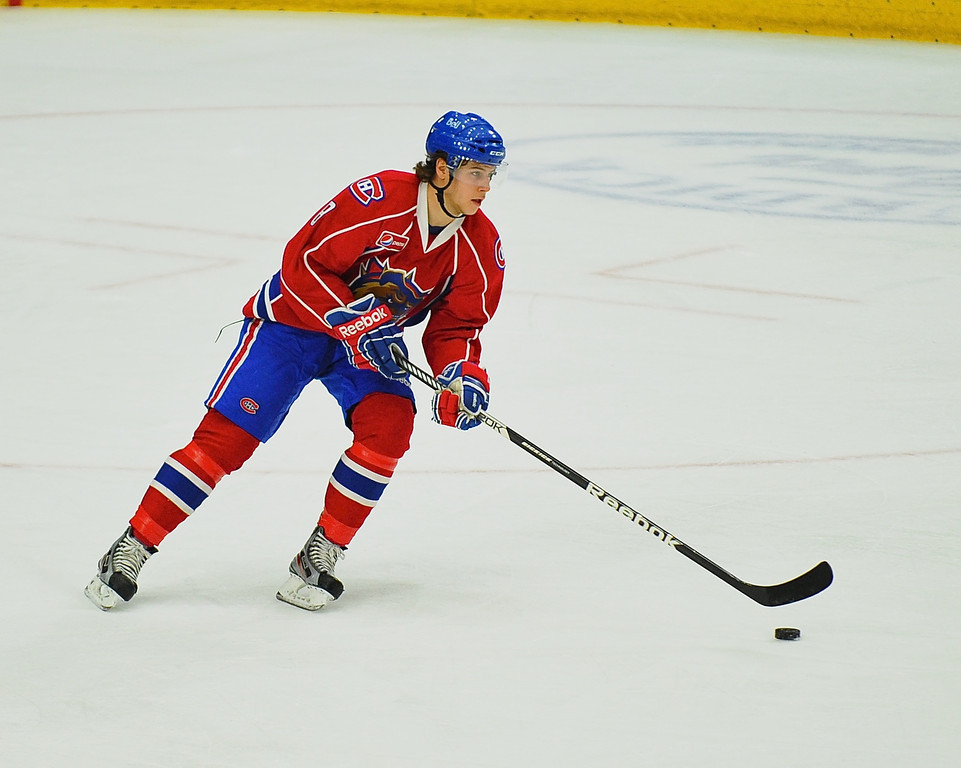 Beaulieu's at the point in his time with the Canadiens that there's little new for me to say here about his tools, we've gone over them a number of times in the past. However, it's still good to summarize, so here we go:

Beaulieu possesses fantastic speed. Last year, Matt Drake called it elite speed, and it's definitely up there even at the NHL level. It allows him to take a few more risks inside the offensive blueline, playing a bit deeper. It means his defence partner might have to abandon his side of the ice if a forward were to chip the puck past him and try and chase it down, but Beaulieu is fast enough to make the recovery on the open man and alleviate a few of the expected odd man rushes against.

The bonus to Beaulieu's speed is that if he is to make those offensive zone pinches, he's way more gifted with the puck than the average NHL defenceman, particularly those that generally populate the bottom of the roster. He has a strong shot, but more impressive is his passing ability and vision in the offensive zone. The puck being on his stick in the offensive zone is something that the Habs will very much enjoy seeing more of in the future. He should be able to get some time on the second PP unit this season when he is in the lineup, along with newly acquired veteran Tom Gilbert.

Beaulieu's biggest weakness remains in the stationary, situational defending. He tends to go puck chasing when the smart play is to defend the area he's already in, and sometimes that can lead to him taking more penalties as a result. He had a rough first year in the penalty department, earning a minor penalty every third game in the AHL, but he managed to bring that back to one every four games this past season.

Generally, his aggressiveness in enclosing on the puck works out for him. He isn't beat too often one-on-one, and makes great reads while defending zone entries, but defending odd man rushes and net front defending remain his greatest drawback.

With Jarred Tinordi on the edge of cracking Montreal's roster, the imposing defender has climbed to fourth in this year's Top 25 Under 25 edition.

Nathan Beaulieu is an NHL defender now in terms of ability. If he doesn't make the team out of camp, it'll essentially be a 'coach's/management decision' and only a matter of time (essentially, when his ELC expires and he can't be sent to Hamilton without clearing waivers). What he can do if he's given regular minutes is play around 14-17 minutes a night with some power play time and no shorthanded time. He'll likely take more offensive zone starts than defensive ones, and generally get more time against third and fourth lines than other defensemen would. And he'll do that quite well.

As he adapts to the NHL's speed (which shouldn't be much of an issue) and physical play (again, not a huge obstacle for him), he should be able to assert himself a little better against the tougher competition. Indeed, it wouldn't be shocking to see him get more defensive zone starts to aid in the breakout over time, especially with Alexei Emelin as his closest competitor on the depth chart in that role. Will he be able to achieve this in 2014-15? That's probably asking a bit much, but it wouldn't be all too shocking if he got more responsibility with each month he sticks in the NHL.

And if there are setbacks in Beaulieu's development, it'll be important to remember the longer trend. Beaulieu is working his way into being a top three defender on hopefully an elite team. I don't see Beaulieu as a future All-Star defender, but I can see him as a 22+ minute defender that provides more than enough offensive value to patch over some of his defensive deficiencies. If he is able to improve his situational defending, he may have a slight chance of hitting a level a bit higher than that. While some look at Beaulieu as the team's long term replacement for Andrei Markov, I'm not nearly ready enough to go that far. But he should provide us with a quality we haven't seen developed on the Habs blueline too often, that of a puck moving middleweight not unlike Tom Gilbert. Even that quality of defender doesn't come around too often.

Beaulieu's skill set and development to date suggests a long NHL career can be expected. And it should be starting permanently this fall.