With Jarred Tinordi on the edge of cracking Montreal's roster, the imposing defender has climbed to fourth in this year's Top 25 Under 25 edition.

One of the rare prospects with a massive frame in the system, Jarred Tinordi displayed his dominant size during his 22-game stint with the Canadiens this year. It was originally thought that the young blueliner was likely to win a spot during training camp, however he was returned to Hamilton due to the signing of veteran Douglas Murray.

Slow development is par for the course when discussing defencemen, especially hulking players like Tinordi. During his late season call-up, Tinordi was given relatively easy minutes by coach Therrien, although he did quite well during those cushy shifts, which led to some pretty interesting WOWY numbers. Unlike the majority of large defenders, Tinordi displays some smooth skating for his size, combined with relatively decent puck skills. He clearly doesn't have silky-smooth hands, but he's not a disaster with the puck either.

Whilst in Hamilton, Tinordi was given first pairing minutes alongside Greg Pateryn, along with a heavy penalty-kill workload, which translated quite well into NHL-level penalty killing when called upon.

More than half of the voters placed Tinordi in the #4 spot, with Luke being the only vote that put him outside the top 10. Andrew tempered his expectations, given that Tinord has little to no professional offensive potential, yet the vast majority of voters saw him in the #4 - #6 range. Tinordi clocked in at #7 in last year's Top 25 Under 25, meaning he's found his way into the top five for the first time in this project. Of course, the graduation of players like PK Subban, Max Pacioretty & Lars Eller helped him jump in the rankings. 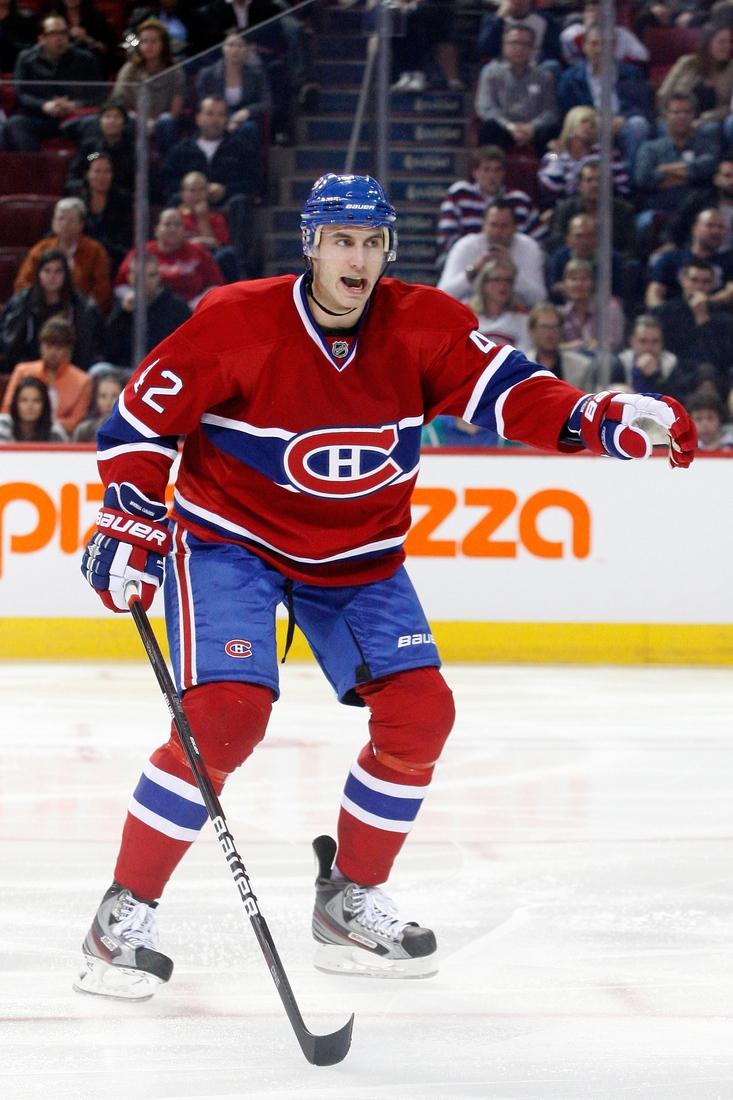 The first thing that comes to mind when talking about the 6'6" defender is that he's about a foot taller than the team average. Well, not quite, but you see where I am going with this. Size is an asset in the NHL, but only if the player with size can combine his frame with some reasonable hockey skills.

Thankfully for the Habs, Tinordi does just that. He possess decent speed, due to his long strides.  His mobility is actually quite impressive for a big man. This allows him to deny speedy forwards that would otherwise out-skate their larger opponents. His defensive acumen is top notch, as he uses his strength to defend the crease ferociously.

Another key element to his game is Tinordi's ability to create a rush with the puck. This isn't a nightly occurrence, but given the chance he can do a fantastic job of moving the puck up the ice quickly.

Despite his size advantage, Tinordi doesn't suffer from the same discipline issues that usually plague big men. The bulk of his penalty minutes were accumulated in fights, rendering his PIM totals quite low in terms of minors. Speaking of his fighting, for a rookie Tinordi has displayed some heavy hands. He concussed Tim Gleason in the pre-season, and went on to win his four regular season bouts, facing Kyle Clifford, Raffi Torres, Carter Ashton and Eric Gryba.

Tinordi isn't a goon, and his talents would be wasted if he was given that role, however it's safe to assume that like his father Mark, Jarred can punish his opponents when put in a fight situation.

The main element missing to a complete game in Tinordi's case is clearly his lack of offensive awareness. He's a defensive defender at heart, and doesn't control the game with the puck like P.K. Subban or Nathan Beaulieu are capable of doing.

I spoke briefly about his breakout ability, but if we're being honest we shouldn't expect to see that happen very often. During his games with the Canadiens we saw little to no offensive breakouts. Rather, we were treated to a few glaring giveaways that resulted in goals against. This was likely due to nerves and the looming risk of being benched for a simple error, which happens to be coach Michel Therrien's modus operandi.

Never given much of a chance to be an impact player before, Bournival's incredibly work ethic forced the Habs into giving him a roster spot last season, and saw him rocket up the rankings in the Top 25 Under 25.

Even though the Habs hold a size deficit compared to most NHL teams, Tinordi's spot in the roster for the upcoming season is definitely not guaranteed. He'll have to fight with other hungry rookies in camp, most notably Nathan Beaulieu.

As it stands, the Canadiens have one spot left in their defensive pairings, which means that either he or Beaulieu face a return to Hamilton to continue their progression. Given that Beaulieu seemed to be the preferred player in last year's playoffs, the odds are that Tinordi will be playing the a large chunk of the 2014-15 season with the Bulldogs. This isn't particularly bad for his development, as he's shown on occasion that he's not quite ready for the speed of NHL play.

Ideally, Tinordi projects to be a solid second-pairing player, with the ability to absorb a large amount of penalty-kill duties. His above-average skating for a man his size gives him the inside edge on his competition, and that should bode well for his place within the Canadiens organization in the future.