Never given much of a chance to be an impact player before, Bournival's incredibly work ethic forced the Habs into giving him a roster spot last season, and saw him rocket up the rankings in the Top 25 Under 25.

For many Canadian hockey players, winning the Memorial Cup as the captain of your hometown squad would be the pinnacle of a career. For Michael Bournival, the best may be yet to come.

Playing with an industrious quality that mirrors the the ethos of Shawinigan, Quebec, Bournival is another example of Canadiens prospect that has found a way to contribute at every level through his development. Acquired in exchange for defenceman Ryan O'Byrne, Bournival is already well on his way toward matching O'Byrne's accomplishments as a NHLer. In fact, in the time it's taken O'Byrne to go from the NHL, to the Maple Leafs, to the KHL, and then to the Swiss League, Bournival has a CHL triumph and two successful pro seasons to his name.

Surprising many by sticking with the Habs out of training camp last season, Bournival has cast aside any doubt that he's capable of competing at the highest level of his craft. Heading into his second NHL campaign, the question now is how far Bournival's potential will take him.

Bournival is firmly ensconced in the upper echelon of our rankings, with the majority of votes coming in at #7 or higher. Bournival slotted in at #12 for three consecutive iterations of the T25U25, starting with his first appearance in 2011. His impressive ascent to the big leagues resulted in a promotion to #7 in our mid-season rankings (January 2014), and now, the energetic forward finds himself at a career high #5. 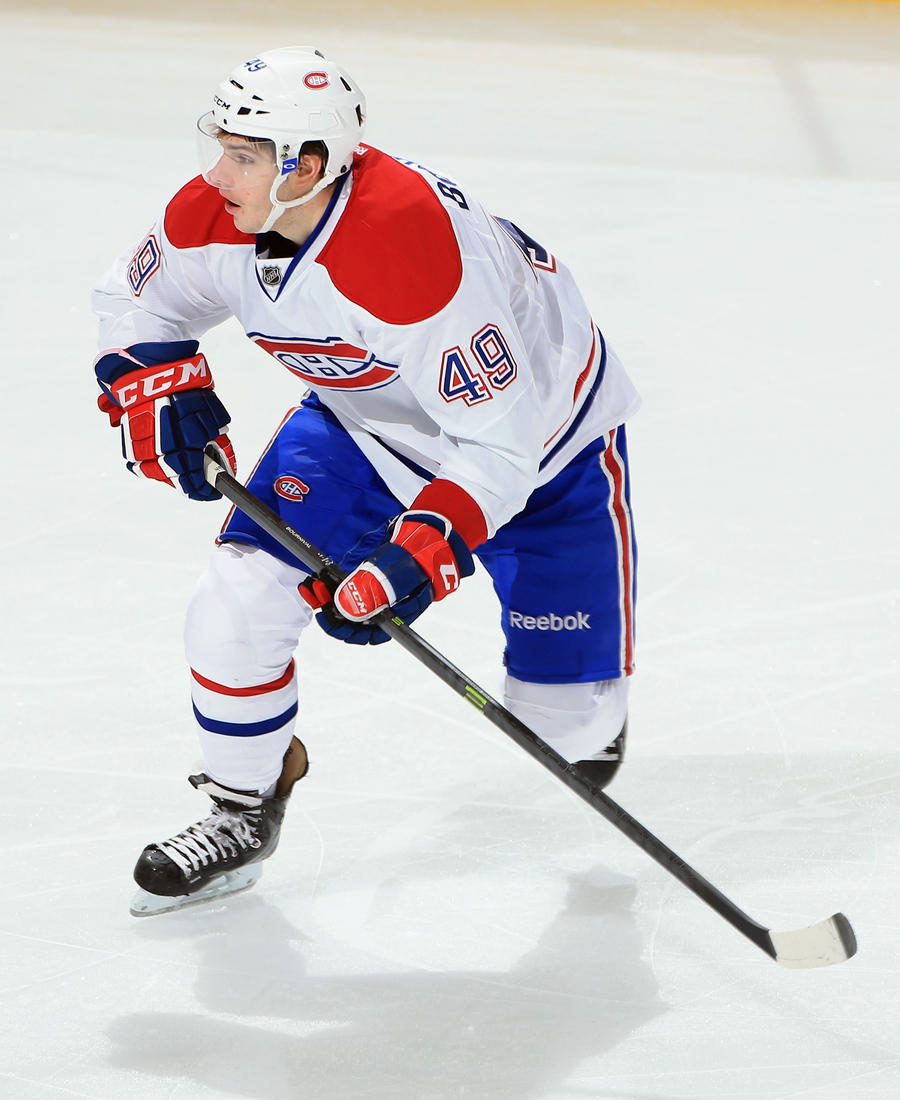 Bournival owns some excellent physical tools, and has been able to turn what was formerly a weakness (his conditioning) into a strength. As a 22-year-old rookie, Bournival was one of the better skaters on the team, using his speed and energy to create a reasonable amount of scoring chances. He made a name for himself as an impassioned and effective forechecker, earning coach Michel Therrien's trust as the season went on.

His positioning  in the offensive zone is one of his more effective assets, in fact, even "Olympic-calibre" defencemen couldn't resist Bournival's prowess in his opponent's zone. Whenever Bournival is given an opportunity to put the puck on net, he does, which comes in handy on a shot starved team like the Habs.

In addition to his body of work in the offensive zone, Bournival has always been an effective forward heading in the other direction, too. Among his regular fourth line colleagues, only Travis Moen had to deal with tougher zone starts, and Bournival was even trusted to flex up in the lineup and take the tough competition with Brian Gionta and Tomas Plekanec. Throw in his proficiency as a second unit penalty killer, and you have a recipe for the type of all-around, bottom-six forward that can be a real asset to his team.

For all of Bournival's physical tools, his hockey-specific skillset is only average. As noted in previous profiles, Bournival's shooting and passing ability is nothing to write home about. Bournival has some offensive potential, but will be hitting what is considered a forward's scoring prime very shortly. His ability to put the puck in the net, or help his linemates do so, may determine whether his career trajectory is that of a fourth liner or a middle-six player.

Also of concern are Bournival's possession numbers, which were, in a word, abysmal. This isn't all on Bournival - his poor possession numbers are symptomatic of his very challenging zone starts, and of his team's difficulty to controlling the puck generally. However, these numbers are also part of a trend in Bournival's professional career to-date, and something that Bournival will need to change is he wishes to preserve his roster spot in the face of a number of impressive prospects climbing the Canadiens' depth chart.

Finally, Bournival's career has always been marred by injury concerns, and unfortunately, a concussion suffered in early February didn't do much to change that. While he has able to return and contribute in fourteen playoff games, the fervent energy he displayed early in the season wasn't quite the same post-injury.

The Canadiens first-round pick from the 2014 NHL Draft has already reached a lofty mark in the Top 25 Under 25 rankings, How did he do it?

Since his draft day, Bournival has projected as a two-way forward who would fit into the bottom of a NHL line-up. Based on his play since that time, it would appear he remains on that exact path.

If injuries don't eventually derail his momentum, Bournival should be able to enjoy a nice, long NHL career, as his speed, strength, and versatility make him a great fit for the bottom of any big league roster. With players like Travis Moen, Brandon Prust, and Rene Bourque perhaps nearing the end of their Canadiens tenures, the young Quebecois may even be close to cementing that role in his home province.