The Canadiens first-round pick from the 2014 NHL Draft has already reached a lofty mark in the Top 25 Under 25 rankings, How did he do it?

In his debut year with the Top 25 under 25, Nikita Scherbak is already regarded at EOTP as a top prospect, ranking sixth overall in the organization and already ahead of others with experience in professional leagues.

Scherbak is an infusion of exactly what the Canadiens needed in their prospect pool; a very talented skater who has top-6 potential with an impressive skills package to make him an enticing player to envision in a future NHL role. He is arguably their most talented prospect outside of the NHL and will be worth watching this season as he suits up once more for the Saskatoon Blades in the Western Hockey League.

It seems circumstances favoured the Canadiens, with the apparent "Russian Factor" leaving Scherbak available at 26th overall in the 2014 Draft. This allowed the team to select a much more talented player than likely should have been available that late, but given Scherbak's commitment to playing in North America, it should not be considered a concern. His leaving the Russian hockey program and his commitment to playing in the WHL, along with various interviews, state a very firm intent to become an NHL player.

Scherbak's rookie season in the WHL was impressive, especially considering his circumstances as he posted a 28-goal, 50-assist effort, good enough for 23rd-overall in league scoring. In his first season on North American ice, he would lead both all of his Saskatoon Blades teammates and all WHL rookies in goals and assists, with a 19-point lead on the second-highest scorer among rookies and a 35-point lead on the second-highest scoring member on his team. This, again, is very noteworthy considering the Blades finished the season winning only 16 of 72 games, as the rookie Scherbak was their most dominant player despite it being his first season in the league without much talent around him to help.

Scherbak was very well-rated by a majority of the panel; only three voters held him outside of the top eight and no less than four voters considered him one of the top four players in the organization. I rated him at seventh due to his excellent profile, but left others ahead due to the brief resume that Scherbak has compiled so far.  While he has a lot of potential, there is always some hesitation about an 18-year-old's future and ability to project his likely career path. 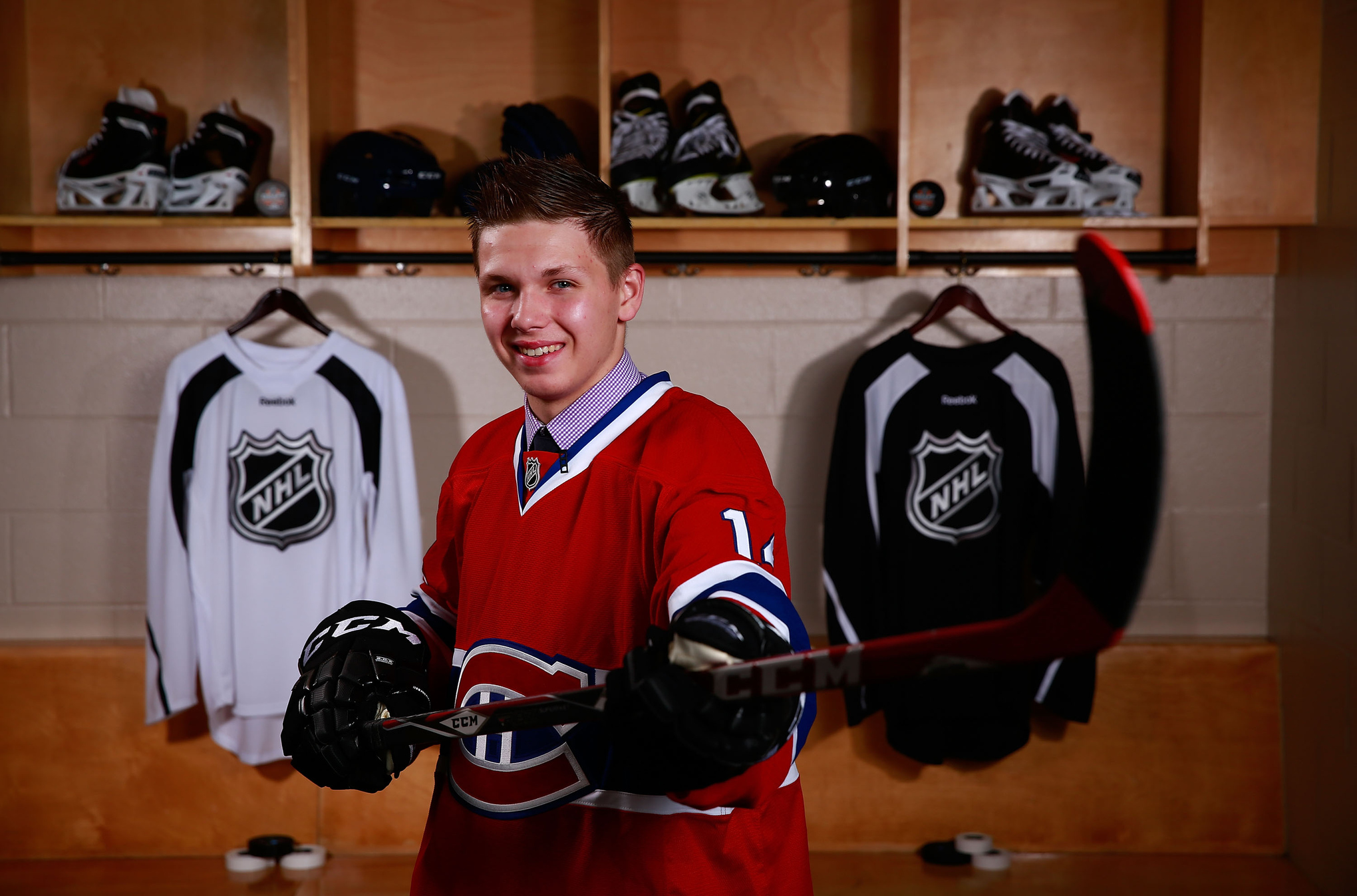 To begin with, he has dynamic skating abilities. Scherbak has an explosive first step and blends it with strong agility, he is well-balanced and even displays strong lateral movements as well, it is likely further strength training will only add to his abilities and make him an even more dangerous skater.

His stick skills are impressive. He's able to use his body to protect the puck very well and does very well controlling the puck even when moving at speed and assessing his offensive zone options. He employs a strong shot and his release is quick enough to keep goalies on their toes. His offence is not limited to goal scoring either; he is an adept playmaker who can create a variety of scoring options with his passing play. His offensive vision is another solid facet of his game, allowing him to exploit gaps in defensive coverage and find the best offensive option in a variety of situations.

While he was limited this year due to not being physically mature quite yet, he was definitely willing to engage in physical play and while not often an initiator, he had no problem facing the tough battles along the ice. He will likely improve in this area as he grows into his 6'2" frame.

There are some critiques that his neutral-zone play lacks some awareness and that he will need to further develop his defensive responsibilities in order to be an effective player. Granted, since he is still just 18 years old this is hardly a unique criticism, given his overall development curve and praise for his hockey vision he will likely be able to mitigate any appreciable risk in his game.

There were also some notations that he needs to better learn to handle contact, as he did not always protect himself when he was being checked. A potential lack of anticipation in this category can be dangerous as top players are often the most targeted by the opposition.

Highly anticipated Jacob de la Rose shows up on the list at number 7 as he prepares to make his North American debut. What does the future hold for the Swedish winger with tons of leadership potential?

With another year to play in the WHL and the Canadiens roster nearly filled out, one should not expect Scherbak to play a regular season game with the main club this season, or even next. Players such as Sven Andrighetto, Charles Hudon, Jacob de la Rose and Jiri Sekac lead him in the depth chart at present and since there is no immediate rush to skate him in the NHL, he can take his time and develop his game in the WHL.

Over the long term, Scherbak is possibly the team's best possible chance to develop a star forward and by the 2016-17 season he should be making a serious audition as a full-time member of the team. His size and skills offer an attractive package that read as a very good chance to become a top-6 forward if not a top-line player. A lot will depend on how he builds on his rookie WHL season of course, but right now he is definitely a high flyer in the organization and a very good potential cornerstone of the team's future.

While there is much competition in the organization these days for forward spots, Scherbak's profile argues that many of his fellow prospects may soon be competing against him more than he must compete against them.