The highest-drafted player Montreal has had in more than a generation, Alex Galchenyuk is the consensus number one pick for top under 25 player. No player in the system has his level of accomplishments at such an early age. Galchenyuk represents the best chance Montreal has to ice a legitimately high-end talent in the centre position for some time.

As the second forward taken from the 2012 draft, considerable expectations were placed on Galchenyuk from the start, despite missing most of his draft season due to injury. These expectations were quickly justified by his draft+1 campaign, with Galchenyuk first romping through the OHL (61 points in 33 games) followed by an excellent rookie campaign where Galchenyuk managed terrific production (26 Even Strength Points in 48 games) despite limited ice time (only 11 minutes on ES per game and minimal powerplay time).

This was destined to be unsustainable rookie production. Galchenyuk was a middling puck-possession player with Montreal and a good portion of his points were due to an elevated on-ice shooting percentage (11.76%). One could not expect a presently mid-tier talent duo of Galchenyuk and Eller to continue to put up goals like the Sedin twins as they did in the shortened 2013 season.

But shooting percentage giveth, and it taketh away. Galchenyuk's production in his second year cratered. This can largely be explained by on-ice shooting going from unsustainably high to unsustainably low (6.18%). This combined with a worse linemate situation and overall team even-strength scoring woes lead to Galchenyuk's offense getting cut in half from his rookie year (1.39 points per 60 from 2.85. 1.78 on ice goals per 60 from 3.65). This also resulted in him shifting from a high-plus to a high-minus player in goal differential.

Neither season gives an accurate measurement of who Galchenyuk was as a teenage forward in the NHL, but the two years have an interesting way of averaging out. His years combined to essentially league average PDO (1003) and Fenwick (50.0%) resulting in a completely even goal differential. His overall stats suggest that he was playing at the level of a fairly average, offensively orientated second-line winger (think Andrei Kostitsyn). His counting stats weren't eye dropping, but keep in mind his limited ice time. On a per-minute basis, Galchenyuk's production compares quite well with other top draft picks in their teenage NHL seasons.

The important thing to keep in mind is that very rarely is a teenaged forward a strong player on his own in the NHL. Those who succeed are often in supporting roles to more established talents in favourable scoring circumstances, like Seguin was in the Bruins top-six, or Stamkos playing with St. Louis. Solid future talents can find themselves under performing if they lack the adequate support, which often occurs with low-drafting teams like the Oilers, Islanders or Panthers.

Galchenyuk is the easy consensus for the top position, much like Subban and Price once were when they were eligible. His talent and demonstrated ability in the NHL at a young age and the absence of the established stars that previously led the list makes Galchenyuk this year's top player, a spot he projects as likely to hold for several years in the future. 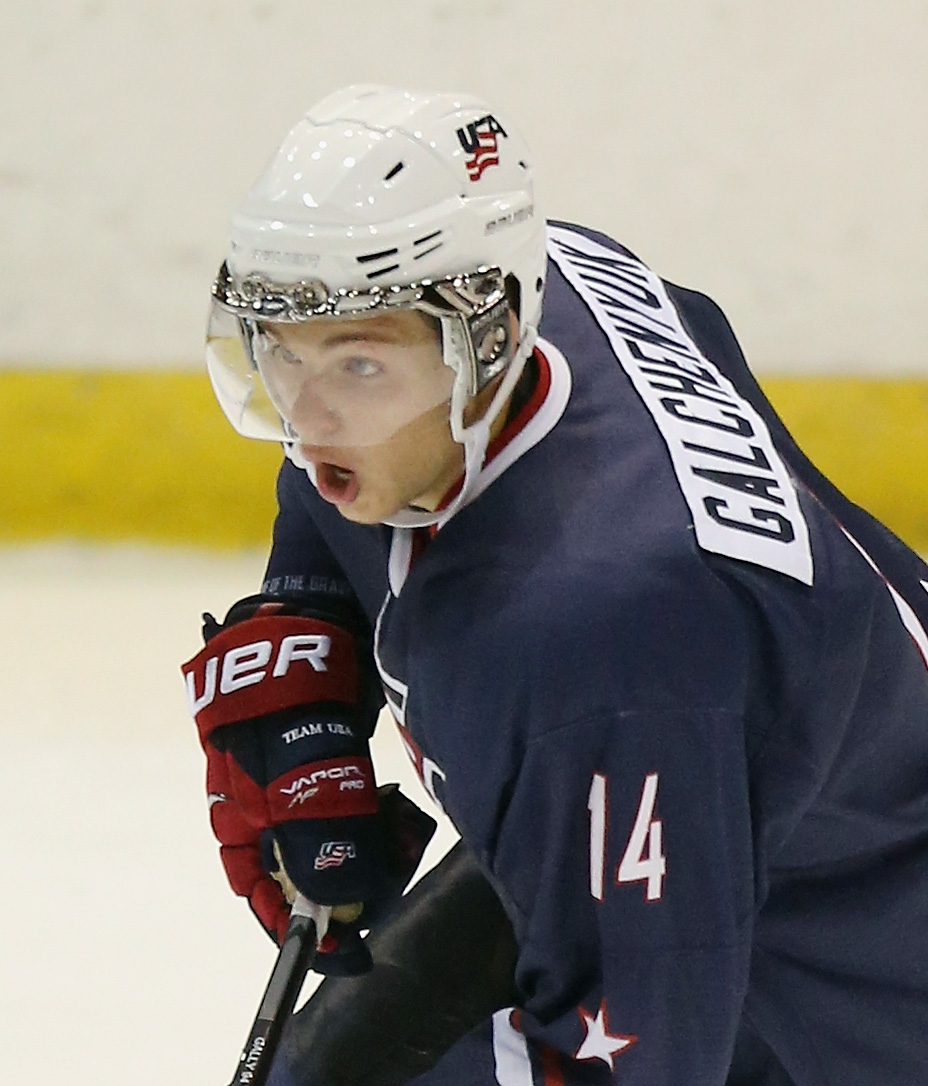 Galchenyuk has skills. He's probably the most talented player with the puck that Montreal has or has had recently. This gives him the ability to carry the puck through opposition, make high percentage passes to his line mates and set himself up in good scoring positions. He also has demonstrated the vision and on ice intelligence necessary to exploit his talents against NHL defenses. Galchenyuk possesses all the tools to be both a strong goal scorer and play maker in the NHL at the level to suggest he could be the focal point of a good NHL team's offense.

Even as a teenager in the best league in the world, Galchenyuk has demonstrated a respectable ability to produce offense. Over the last two seasons he clocks in as the teams' third-best scorer, behind only Montreal's top wingers in Max Pacioretty and Brendan Gallagher. He's been particularly gifted as a set-up man in the offensive zone, leading the team in his rate of putting up primary assists.

Galchenyuk possesses an excellent wrist shot, which he prefers to use in close, from the slot. Galchenyuk combines this sticking handling talent and skating agility make him particularly adapt at carrying the puck into high percentage areas. These talents suggest that he will be a natural high-percentage shooter in the future.

Even if Galchenyuk were not to develop any further from where he was at 19 years of age, we could project a long and respectable career as a 2nd line left-winger from Galchenyuk. But as he was doing so at an age few players are even worthy of playing in the NHL, there is strong reason to believe he can turn into a top line scorer.

Galchenyuk's skating, particularly his first step and his physical strength are at an NHL level, but need to be improved if he is going to live up to his potential as an elite offensive player. His frame is of an above-average sized NHL center, but this has not yet translated into the strength to physically protect and impose himself on the ice against professional competition. Habs fans are waiting for an off-season such as the ones Max Pacioretty and Lars Eller have had in recent years when Galchenyuk's body finally fully develops. Improving his on ice quickness will also be a factor in whether he will improve his scoring abilities off the rush and capacity to carry the puck into the offensive zone.

While Galchenyuk's shooting skills are strong, he has been a below-average shot generator so far in his NHL career. Part of this may be down to opportunity and a lack of development and a general reluctance to shoot except from high percentage areas, but he will likely have to increase the degree that he creates scoring opportunities for himself if he is too be an important goal scorer in the future. This will likely be linked to his development as a puck possession player as he takes increasing responsibility for driving his line's offensive play.

Like many teenagers in the NHL, Galchenyuk does not possess much defensive ability, although he does have the tools necessary to develop a two-way game in the future. Presently his game is biased towards helping his team be effective in the offensive zone. There is also a concern that he has not been given much chance to develop his center-specific defensive duties (including faceoffs) due to his primary usage as a left-wing. Recent history of talented forwards eased into the NHL at wing who later transitioned to center without much difficulty such as Tyler Seguin and Claude Giroux suggest that this issue may be over-blown. However, there is little to suggest that Galchenyuk has the sort of high-end defensive ability that turns a first-line scoring center into a two-way god such as Anze Kopitar, Jonathan Toews or Patrice Bergeron.

Galchenyuk still appears to be a good bet of being a front-line forward in the NHL. While he has yet to break out from the top-nine winger role he has occupied since coming to Montreal, his track record and talent suggest that there is a strong likelihood he will develop into a top-line caliber forward in his 20s, possibly as soon as the next two seasons. It seems reasonable to project him to reach a similar level as Max Pacioretty, as a star forward.

There is an outside chance that he could even become a top 10-15 centerman in the game, but fans should be cautioned that is very elite company for a player to keep, since most top 3 picks forwards do not accomplish such a feat.