After narrowly missing the Top 25 Under 25 in his draft year, Hudon shot up the rankings to #10 in 2013, and stays there this summer.

Expectations were extremely high for Charles Hudon this season considering he was a 5th round pick a couple of years ago. After making Team Canada's World Junior squad at 18 years old and being forced to bow out due to a back injury, Hudon was determined to make the team at 19, despite still hurting from never healing from that same back injury. The problem was that because of that injury he got very little ice time from the coaching staff, even though he was extremely effective.

In fact, if there's any major criticism of Hudon, it's that he has continued to play with lingering issues with his back for the last two seasons, which means that he is a constant injury risk, and also makes it difficult to get an accurate read on just how good he is, or can be. Hudon has shot generating points machine for two years now in the QMJHL, but his point production has remained relatively the same for four seasons.

Hudon has experienced a weird progression in shot generation that has coincided with a worse shooting percentage.

That's a really, really strange trend for a player as talented as Charles Hudon, though it's not a sign that I would expect to continue, especially since he continues to trend up in every other way. 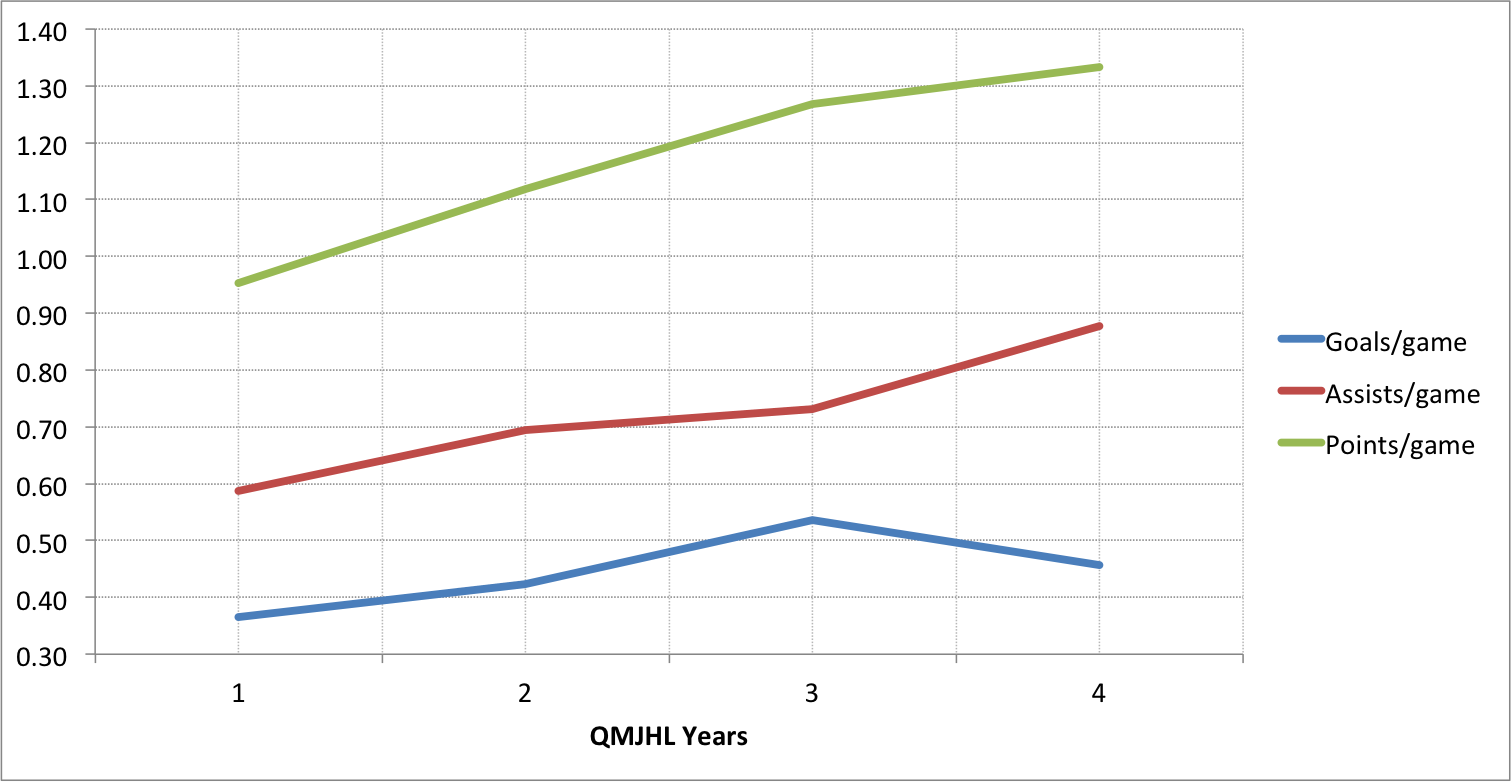 Hudon did draw some criticism during the playoffs for a lack of intensity from some corners, but this is hard to see when you look at his numbers, because his shot rate was a blistering 5.09 per game against tougher competition, and though his conversion rate went down, you would think that if he wasn't giving it his all his shot rate would too.

There was a fairly strong consensus on Hudon between 9th and 14th, with the only outlier being Justin at 4th. Had Hudon not shot at a shockingly low 9% shooting percentage, it's likely that he would have shot up the rankings a fair amount, but it's become show me time for Hudon, who shows a ton of promise but hasn't quite hit it out of the park yet. 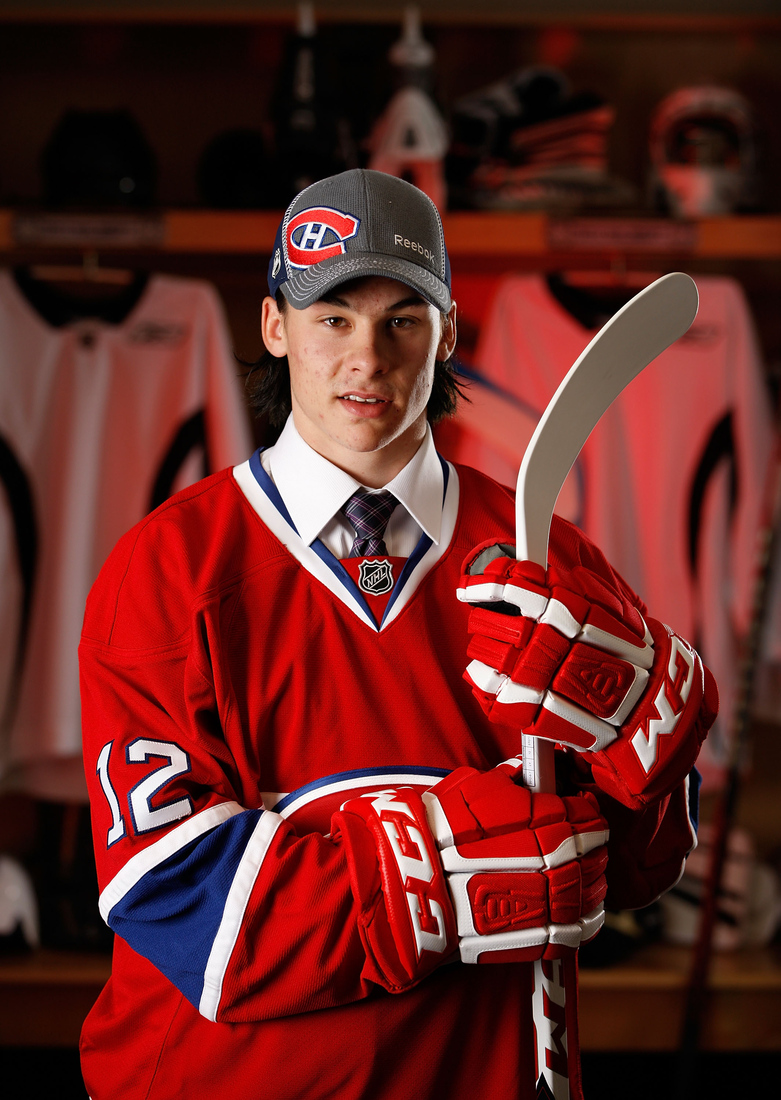 Hudon is a dangler of the highest order. The clichéd "puck on a string" description applies perfectly to him, but as you can see from his shot totals, he's not afraid to put the puck on net either. He's been lauded for years for the ability to put the puck through defenders with perfect passes. There isn't much offensively that Hudon doesn't do well because of his combination of hockey sense and high end skill.

Hudon's ability to handle the puck and create offensively has translated to a strong possession game, with Corey Pronman noting in his draft year that he had a very high panic threshold, "and tends to make the right plays even when being tightly checked".

What Hudon has been working on the last few years though, is his defensive game. Hockey Canada was impressed with his versatility, though as I mentioned earlier, his injury did hold him back in that tournament. That versatility has led to the Canadiens choosing to switch him from left wing this upcoming season to center, where he will likely play on the second line in Hamilton behind T.J. Hensick.

Many assumptions are made about Hudon due to his size, but he's also not afraid to muck it up in the corners and fight for pucks. He's not exactly a bruiser, but he's not easy to take the puck from either.

Speed is always the top complaint from scouts when it comes to Hudon's game, because he clearly doesn't have the top gear that others like Michael Bournival do, but he's not so slow that it limits his effectiveness, especially since his game is so cerebral. Hudon is able to slow the game down to his pace, though he still needs to prove he can do that at the pro level.

What really makes Hudon an uncertain commodity though are his issues with injuries over the last couple years. He hasn't missed a ton of games, but there always seems to be something up with his back hindering him from being at top form. Hudon looked to be at full speed during development camp, so maybe he's put those issues behind him, but back injuries always seem to return and haunt players, and it is a concern.

A new face to the organization, Jiri Sekac's skill, experience and offensive prowess gives him the edge to debut rather high on the Top 25 Under 25 project.

I remain of the opinion that Charles Hudon has the skill to be a darkhorse candidate to skip the AHL entirely and make the Canadiens this season, but he's the darkhorse because he's less likely to do it than an older player like Jiri Sekac. At development camp, Hudon was easily the most dynamic and creative player on the ice, looking like he was trying to make a statement.

There's obviously got to be some concern over Hudon's declining shooting percentage for three straight seasons, but he still projects as a possible top-six forward who can put up a significant amount of offense. A solid first year in the AHL on a team that has struggled mightily to produce goals would go a long way to proving his mettle. If the move to center sticks, you have to think that Hudon's stock within the Canadiens organization would go up significantly, as not many wingers can hack that shift due to the extra responsibilities.