From the moment Dalton Thrower traded punches with Tom Wilson at the 2012 CHL Top Prospects game, in defense of Blades teammate Lukas Sutter, I've been a fan of the rearguard from Squamish, BC.  With a name that calls to mind UK metal legends, Bolt Thrower, how could I not be?

The 51st overall pick in the 2012 NHL Entry Draft by the Montreal Canadiens, was projected as late first round pick by some, but fortunately was still there at 51 when the Habs used the Nashville Predators' second round pick (acquired in the Hal Gill trade - Robert Slaney we barely knew ye) to draft the Saskatoon Blades' star rearguard.

Thrower made his debut on this list at 16th in 2012, but then dropped to 23rd in 2013 after a less than stellar year with the Blades including a disappointing Memorial Cup that saw him suspended for a hit to the head. The hit came in the final game of the round robin portion of the tourney. The host Blades, without the services of Thrower, subsequently lost the next game - the tie-breaker game against the London Knights - and were eliminated from the tournament.

A sure-fire prospect who made scouts drool as a 16 year old rookie in 2009-10, Thrower saw question marks surrounding his development as a 19 year old. That off-season saw him traded to the Vancouver Giants, who took a flier on Thrower, hoping he'd be be returned to junior and bounce back as a 20 year old. Thrower was eligible to play in the AHL, but fortunately (or unfortunately depending on your perspective) he didn't make the Bulldogs out of camp and spent the 2013-14 season as the Giants' captain.

While the Giants weren't a world beater by any stretch of the imagination, Thrower was a key part of their early season success. Overall it was a bit of a mixed bag for Thrower as he battled ankle injuries and missed much of the second half of the Giants season and their short-blinkandyou'llmissit-playoff run. Thrower, however, did post the best PPG of his 285 game WHL career with 39 points in 42 games. 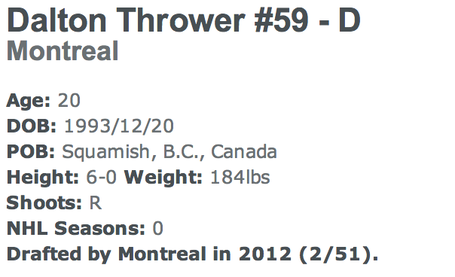 I had Dalton Thrower ranked 16th, other panelists ranked Thrower anywhere from the 14th best  to the 27th Canadiens property under 25.  Only two panelists had him outside the 25 (26th and 27th). Notably was that the panelist (Bruce Peter) who is probably most familiar with Thrower, was one of the panelists who placed him outside the top 25. In hindsight while I do still think Thrower is a top 25 player, ranking him 16th is probably a bit off and his actual 18th overall ranking is a little more accurate. There's a lot to like about Dalton Thrower. Thrower's greatest strength might just be his incredible name. It's like Justin Blades, Razor Shines, or Alec Berg - you'll just keep saying it over and over again.With the exception of his shot (which is truly a weapon), Thrower doesn't do any one thing at an elite level. Fortunately for the Habs and Thrower, he does do a little bit of everything at an above average level. Thrower has nice puck handling skills and offensive instincts for a defenseman, operating as both a goal scorer and playmaker for his team with the man advantage. His above average skating ability allows him to get into position with a deceptive quickness.

Thrower plays a big man's game and plays it fairly well. He can deliver some devastating hits and he's not afraid to drop the gloves - a tendency he has been much smarter in deploying the past two seasons.

Aside from his ability to agitate, Thrower has also displayed leadership and an ability to handle and adapt to adversity (both of his parents are cancer survivors and Thrower has lived away from home from a young age). His character is often cited as one of his greatest strengths, so there's a lot to like about Thrower if you're geared towards the traditional view of defensemen - tough as nails, lots of character,  lots of hits, will throw them with anyone, and can chip in a goal here and there. Me? I just like that slapshot.

One of the criticisms that seems to be leveled at Thrower is his lack of consistency. The reason his post-draft hangover season seemed like such a disappointment is because it was the first time in Thrower's four year junior career that he didn't seem to grow by leaps and bounds as a player. While Thrower improved his defensive play and cut down on his penalty minutes in 2012-13, his offensive totals receded and he took himself out of Memorial Cup play with a reckless hit on Taylor Leier hurting the favored host Blades for the rest of the tourney.

And that recklessness is the problem with Thrower. It isn't the lack of consistency or slowed development, both of which aren't exactly true as evidenced by Thrower's 2013-14 season when he was a crucial part of the Giants attack (the Giants only managed 7 wins in 22 games without him). Thrower's recklessness, which can be curbed, has led to his lustre dulling. The suspensions, reckless hits, and the fights that take him out of the play are what diminish Thrower's bottom line (and hey the injuries certainly don't help either). Thrower's 2012-13 season was a disappointment, but it wasn't because Thrower suddenly turned into a bad player. During Thrower's injury and suspension, Darren Dietz took over (and kept) Thrower's spot on the top PP unit, as a result Thrower's offensive production fizzled when he returned to the lineup.

On a positive note, Thrower's offensive numbers took a jump when he moved to Vancouver and was installed on the team's top unit. The only problem was that he couldn't quite manage to play a full season due to injuries and yet another suspension for a reckless hit.

Thrower is the type of player who wants to do whatever it takes to help his team, a little more foresight, experience and caution will prevent that tendency from becoming a liability.

Zachary Fucale is coming off a tough playoff exit with the Halifax Mooseheads. Can he bounce back and return to being the workhorse that brought Halifax the Memorial Cup?

Thrower has a ticket booked for Hamilton for the 2014-15 season, that is a guarantee. What this means for his development depends on how he's used by head coach Sylvain Lefebvre. Thrower will be competing for playing time in Hamilton with fellow Montreal prospects Greg Pateryn, Mac Bennett, Darren Dietz, Morgan Ellis, tweener Davis Drewiske, and Hamilton properties Bobby Shea, Joe Finley, and David Makowski. This is without even considering Jarred Tinordi. It's a crowded house, especially for right handed shots like Thrower. It's pretty easy to see that in a best case scenario Thrower would be brought along slowly and is used as a bottom pairing defenseman, but who does Thrower skate with? Davis Drewiske and Joe Finley are both left handed shots, but Drewiske on the bottom pairing doesn't make a whole lot of sense and the 6'8 250 pound Finley is far from an ideal partner for Thrower. More than likely former Blade and second year Bulldog Dietz skates along Thrower with one of the pair skating on their off side.

Having said all that, Thrower will get a chance to gain great responsibility in Hamilton. Lefebvre hasn't been afraid to give rookie defensemen PP and PK duty, with Dietz seeing time on both late last season. Don't expect to see Thrower in Montreal this season and don't be surprised if roster juggling and a need for quality playing time sees him wind up in the ECHL for a spell.

Thrower believes himself to be a Kevin Bieksa type player, but if the recklessness isn't curbed it isn't that hard to imagine him as Denis Gauthier type.