Zachary Fucale is coming off a tough playoff exit with the Halifax Mooseheads. Can he bounce back and return to the workhorse that brought Halifax the Memorial Cup?

Despite possessing one of the best young goaltenders in the league, Montreal decided to pick Zachary Fucale early in the second round of the 2013 entry draft. With a handful of second-round picks, Timmins and Bergevin gambled on the Laval native, who was expected to be picked in the first round.

Ever since the day he was drafted, Fucale has been the subject of much division among the EOTP staff. We rarely rank goalies high due to the rather large failure rate of the position, and frankly Fucale's QJMHL numbers weren't very impressive considering he was playing behind a powerhouse team in the Halifax Mooseheads.

Fucale clocked in at #22 in last year's edition of the Top 25 Under 25, meaning he actually rose in the rankings despite a tough playoff series and a somewhat lackluster performance at the World Junior Championship. He did not however gain any rankings over his mid-season T25U25 review.

For the first time in this year's Top 25 Under 25 every single vote for Fucale fell within the top-25 range. Andrew and Bruce gave him the lowest ranking, wheras Mark and Luke placed him the highest at 15. Essentially everyone thinks he carries a lot of potential, but there's no delusions of grandeur when it comes to his current ranking. 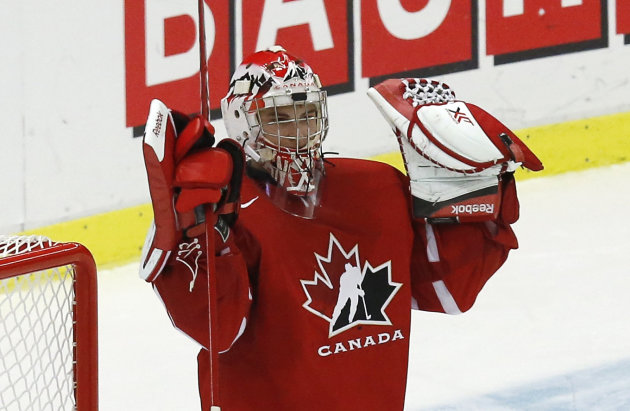 Like Montreal's current goalie, Carey Price, Fucale possesses a rather obvious quality to his game; poise. This is one of the most important skills a goalie can possess, as the road to the NHL is generally quite bumpy and filled with challenges.

Last year the main criticism of Fucale's game was that he would lose focus and concentration during blowouts, however he seems to have improved in leaps and bounds this season in terms of consistency.

Even when things don't go well, Fucale seems to learn from it. His reaction to his recent playoff struggles was encouraging, as he took the negative results in stride and provided all the answers you'd want to hear from a young prospect:

His reflexes can be described as high-end, as he generally relies on his speed and reaction time to compliment his sound positioning.  Fucale also happens to be a veritable workhorse, having played over 200 games in the QJMHL over the last three years, in addition to Team Canada development camps, the WJC and the Habs development camps. Fucale has seen more action than almost any goalie in the CHL or abroad, which usually bodes well for goalie development.

Here's what prospect expert Corey Pronman wrote about Fucale in his recent Top Prospects list, where he ranked Fucale as the fifth-best goalie prospect around the league.

"Fucale is athletic, agile and reads the game very well. He battles hard for pucks and has a very calm demeanor around the net.

Poor-to-mediocre save percentages seem to follow him around at the tournament and league-play levels, but the scouting on him indicates that trend should change."

Fucale has a tendency to cheat, and has a history of being burned by weak goals. Despite shouldering a ridiculous workload, there's no denying that his save percentage has been less than desirable. He's an athletic goalie, however his lateral movement could improve with some better timing.

There was some concern shared several scouts when Fucale suffered a terrible playoff series this Spring versus Val-D'Or. Fucale was pulled on several occasions, and sported a brutal .800 save percentage during the 6 game series loss.

To be fair, Fucale was at the end of a ridiculously busy year, and no goalies are above a bad series. His reaction to the poor showing seemed to be positive, as evidenced by the video posted above.

Goalies are always tough to project, and Fucale is no exception. As it stands I wouldn't be surprised if he develops into a top quality back-up, verging on possessing the endurance to perform as part of a 1A-1B situation, mostly likely being the lower tier goaltender in the duo.

That being said, the landscape in the NHL will definitely dictate his long term effectiveness. If a goalie like Ondrej Pavelec can be a starter in the NHL, there's no doubt that Fucale could possibly etch out a starting job. As our goalie expert Chris Boyle reminded me, our current back-up Peter Budaj played over 56 games twice in a year, so it would be naive to write-off Fucale at this point in his career.

When we look at the previous goalies that graduated from the QJMHL, we see that the vast majority sported a better save percentage throughout the regular and post-season, and most of them didn't play behind a team as strong as the Mooseheads. Of course, we need to keep in mind that the Mooseheads play an offense-first game, often giving up very high scoring chances whilst attempting to create scoring chances of their own. 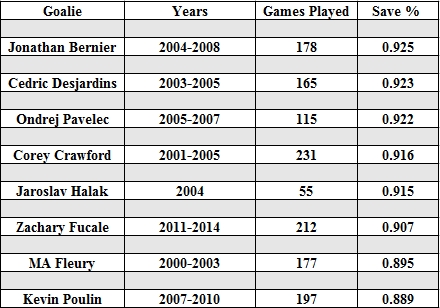 I was lucky enough to catch roughly 10 games in which Fucale was playing, and unfortunately he never impressed during any of the outings I caught. Keep in mind ten games is a very tiny sample size and this was before he was drafted by the Habs, but my first reaction to watching him play after a few games was that he was a Marc-André Fleury clone.  He seemed to allow at least one poor goal per game, and kept the opposition in games where the Mooseheads should have been up by four to five goals. Despite his above-average speed, Fucale just never struck me as a potential starter during my limited viewings.

There's really no telling where Fucale will end up. He might join the ranks of the many promising goalies before him that failed to make it to the show, he might end up as an NHL back-up, or he may prove a lot of pundits wrong by becoming a full fledged starter in the NHL.

If Fucale does manage to crack an NHL roster, in all likelihood I see him sharing the workload with another goalie in a platoon situation similar to what Jaroslav Halak has done throughout his career.