Picked in the fifth round of the 2014 draft, Daniel Audette is the latest in a series of diminutive skilled forwards Montreal has picked up in the later rounds in recent years, joining the likes of Reway, Andrighetto, Hudon, Archambault and of course Brendan Gallagher.

More: Audette: The steal of the draft? Getting to know fifth-round pick Daniel Audette

It seems that Daniel Audette is a player that can fill the net, as seen by his scoring compared to other 17-year-old players in his draft year: 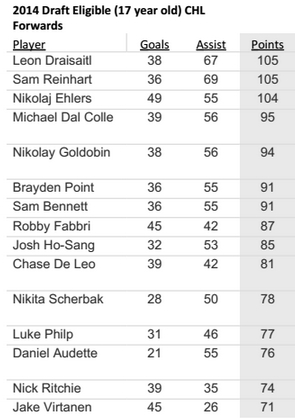 The "take the little guy who fills the net" strategy for late picks is a favourite among hockey's statistically-minded and it's been encouraging to see Montreal embrace it recently. This has paid off so far with a young top-six winger and a 20-year-old who lead his AHL squad in scoring.

The upshot of this strategy is that they must be actual effective players like Gallagher was as a junior (playing top six for Team Canada on merit), at not merely highly skilled like the forgettable Oliver Archambault. The ultimate hope of this strategy is to pick up players like Gallagher and David Desharnais for the big-league team, ones that provide solid return on the limited investment put into them.

Audette is a late-round pick from the most recent draft, which makes him a prospect with a very limited track record or information about. Therefore it is not surprising that there is not much of a consensus on his value at this point. Five voters think he is worthy of being in the top 15, while four others deem him unworthy of even being in the top 25. The average ends up being the 20th ranked prospect, which suggests the crowd collectively believes he is a prospect with a moderate likelihood of being a decent NHL player at some point.

Offense, Offense, Offense. Audette has the full package of attacking skills including stick-handling skill, mobility and a quick wrist shot, but most people consider his standout skill to be his play-making vision.

Audette uses this skill to greatest effect in powerplay situations, where he earned a large portion of his points in 2013-14 (37 out of 76, or about half. Top line forwards typically earn about 1/3rd of their points with the man-advantage). Audette's skill led him to be the highest scoring player on his team by 32 points as he was the offensive fulcrum of a shockingly weak Sherbrooke Phoenix squad and the 13th highest scorer in total points among draft eligible CHL forwards.

However, Audette's PP production should be taken in context, Extra-Skater has calculated that he was on for about 80% of his team's powerplay minutes, suggesting that one reason he got so many PP points was that he was given such extensive opportunities to collect them. Paradoxically, the weakness of Audette's team may have been a significant boost to his overall scoring due to him getting more chances to score than most.

Audette was also used as a limited penalty-killing option, although the Phoenix understandably seem to have focused his usage to more offensive situations. Speed, vision and the skill to take away pucks can be strong defensive attributes for a center, so it will be interesting to see if Audette can develop defense ability going forward.

Though at times it may appear that EOTP's editorial policy is to mock concerns about size at every opportunity, we can't deny that it must be considered something of a hindrance for a player to be well below average for pro-hockey. That said, I think we are increasingly seeing that players should be evaluated on the basis of how good they are in general, rather than ticking off boxes of attributes. So the next question is, what on the ice is Audette not particularly good at?

One of the first concerns is defense. Not that Audette is particularly bad defensively, just that he isn't noticeable for being particularly good at it either. Audette's -37 and 76 ES goals against are more likely more due to the big minutes he played on a bad team than lack luster defense, but at the same time Audette wasn't good enough both ways to have particularly better defensive results than Sherbrooke's low baseline. Audette may be offensively talented, but he's not likely have the top line talent necessarily to hold down an NHL job on offense alone. Audette's prospects to make it through the pro-ranks would be much improved if he can become at least something of a two way player.

The next concern is how good of a five-on-five scorer Audette proves to be. In terms of five-on-five scoring per minute, Audette simply wasn't that great. There is a pretty good reason for that, as he was called on to play gigantic minutes against top opposition with a poor supporting cast.

Only Audette and one other Phoenix (linemate Tim Weisser) managed even 20 ES points for the entirety of the season. At the same time though, if you are hoping to see a CHL prospect in the NHL, you generally are hoping that they will dominate ES minutes. I've read some followers of Sherbrooke note that Audette's ES game fell off towards the end of the season and that he wasn't the dynamic player he was to start the season. This is also something which could be attributed to Audette's overuse as a bad team's top center but it could also be a sign of a lack of the endurance necessary to survive the pro game.

The Canadiens' first round pick in the 2013 NHL Entry Draft, McCarron dropped like a rock from his initial ranking of 14th on the 2013 Top 25 Under 25.

In general it will be instructive to see how much of the good (76 points!) and bad (-37) of Audette's first season owes to some truly unusual circumstances on a CHL expansion team. As Sherbrooke improves, I would not be surprised if Audette's scoring totals do not rise particularly fast for a maturing junior player (due to how much benefit he already was getting from top PP minutes) but for his even-strength and defensive efficiency to rise dramatically.

My current best guess for Audette's future is for him to spend the next two seasons in junior, potentially playing on a competitive team at 19, followed by a two-year AHL apprenticeship. Career upside seems to be something like the next David Desharnais, as a top six/nine offensive specialist that will be undervalued due to size concerns. Given how far in level of play and years Audette is from the NHL, he would be more likely than the average prospect on this list to fail to reach his projection.