As we break into our top ten, we take a look at two prominent Swedes, a flashy Finn, a rugged rearguard, and a current Canadien. 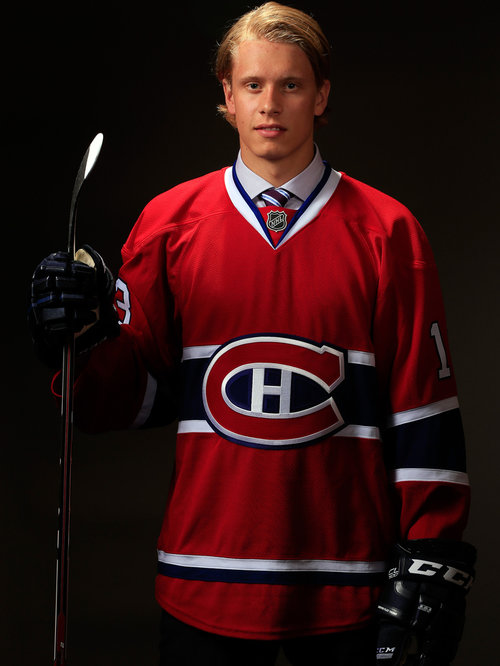 Like a number of prospects we've looked at already, and the pair of players directly in front of him on our list, Jacob de la Rose possess a great deal of speed and skill. What immediately sets him apart, however, is that he has the size to go with it. The 18-year-old is already 6' 2", and weighs in at around 175 lbs. With plenty of time to keep going, DLR looks like he'll have no trouble maintaining a frame that suits the two-way game he favours.

Playing in a men's league at only 18 means that de la Rose suffers the same problem many of his highly-touted, NHL-bound peers do - a lack of immediate ice time or opportunity. Given a feature role for powerhouse team Sweden at the Worlds Juniors, however, de la Rose showed just how dominant he can be. DLR played on the top line, and he did it all - scoring (6 points in 7 games), drawing and killing penalties, and generally demonstrating that he can be relied upon wherever he's needed.

Like his SHL peers, Collberg and Nygren, DLR will likely have the option to join the Bulldogs for a playoff run, should one materialize. In the mean time, look for the keep pushing for ice in the SHL. 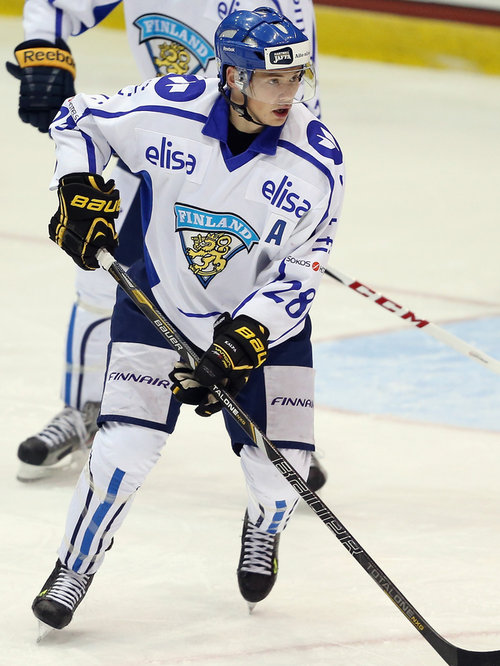 Checking in at the nine spot on our midterm list is sensational Finn Arturri Lehkonen. The Canadiens' most recent second round pick has a great set of skills, and he put them on display for Finland at the World Junior Championship. Teamed with Chicago Blackhawks pick Teuvo Teravainen, the pair made the tournament's most dangerous line en route to a gold medal.

While Lehkonen has been noted for his speed and skill, his willingness to take his talents to the front of the net are a big part of what makes him so dangerous. Lehkonen put this attribute on display against Canada, when he rooted himself in front of Zach Fucale and banged home the game winner. Here's a similar effort against Norway:

While it's been addressed on EOTP already, it's worth a quick note to put his production in Finland this season in perspective. Earlier this season, it was noted that Lehkonen was failing to produce offensively. At that time, we (thanks to Anthony Delage) found that it was really a matter of luck, and that Lehkonen's shot production was actually quite strong. Well, that luck has turned around, and after scoring only three goals in his first twenty games, he now has eleven more in his last twenty five (EliteProspects info above is a few games behind). Artturi Lehkonen is going to be good. 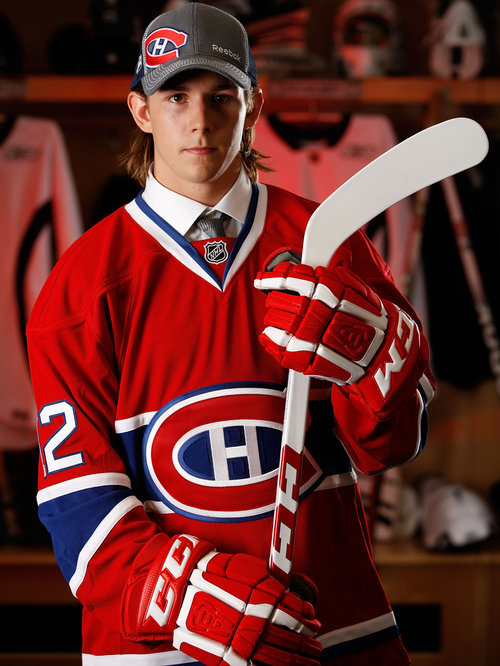 Sebastian Collberg rises all the way to 7th, earning a near consensus placing him in our top ten. The Swede is one of the most talented and dynamic prospects in the Habs' pool, a lightning quick skater with creativity and and a rifle for a shot. Despite suffering what seemed to be a never-ending string of injuries and illnesses that chipped away at his World Juniors ice time, Collberg still managed six points in seven games. Like his time with Frolunda in the SHL this year, Collberg's production of shots and scoring chances seems to be out of whack with his point production. Considering his talent, it feels inevitable that Collberg will eventually turn the corner and begin putting up more goals and assists.

Collberg was an early cut at this season's training camp, but at only 19-years-old, he still has time on his side. Look for an uptick in his production in the second half of his Swedish league season, and then hopefully, a playoff run with the Hamilton Bulldogs. Collberg will certainly be back at Habs camp next September, fighting to stick around a little longer. With shots like this one, his first SHL goal from about this time last year, he may just be in good position to do so. 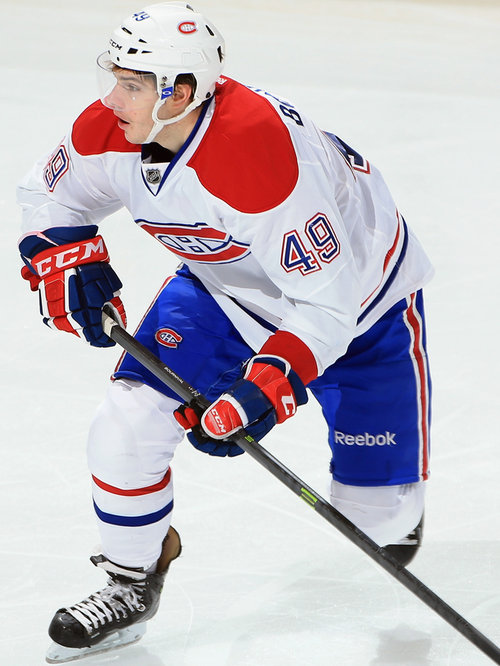 In a mostly depressing season, Michael Bournival has been one of a handful of pleasant surprises. Strong and fast, Bournival took an excellent training camp and used it as a springboard to a roster spot for the season opener. Now, almost two-thirds of the way through the 2013-14 season, Bournival has yet to relinquish his spot.

While his versatility has allowed him to move through several different positions in the lineup, Bournival is also the owner of a great release. To wit, his first NHL goal.

Bournival, despite being less than lucky, has maintained a respectable 1.19 points per sixty minutes of ice, good enough for ninth on the Canadiens. When you pare that statistic down to goals per sixty minutes, Bournival rises all the way to fourth place on the team. At this point, Bournival is probably already deserving of more ice time than he's receiving from Michel Therrien, and it's a certainty that he has too much to offer to be scratched in favour of a guy like George Parros. In any case, the 21-year-old looks like another excellent member of Montreal's young corps, a solid third line type with enough skill to flex up in the lineup when called upon. 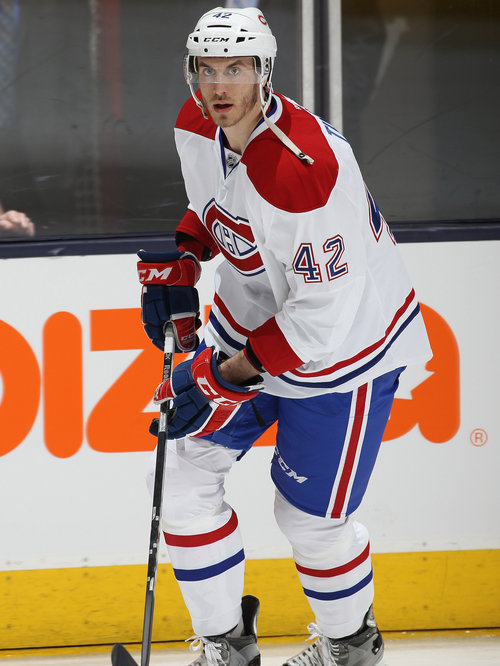 At number six on our midterm list, Jarred Tinordi has again pushed himself up our rankings. The steady, physical defender has become a leader on the Bulldogs blueline, reprising the role he held with the London Knights during his time in the OHL.

For Tinordi, it's not so much a matter of if, but when. With 14 NHL regular season games under his belt, coming at the end of last year and start of the current season, Tinordi has proven himself to be a reliable call-up. In last year's NHL playoffs, Tinordi teamed up with Francis Bouillon to form a reliable third pairing. Tinordi was cushioned in his deployment, and like his teammates, held the edge in possession over his Ottawa opponents. While the sample size is small, it appears that Tinordi is already a better option than the defencemen currently occupying the bottom of the Canadiens' depth chart. Prized for his size, physicality, and defensive acumen, there's no reason that Tinordi couldn't sub in for Douglas Murray on Wednesday.

Nonetheless, look for Tinordi to continue to act as the go-to shutdown defencemen as the Bulldogs build momentum toward the playoffs. Assuming the status quo remains in Montreal, Tinordi should have an excellent opportunity to earn a full time job in the NHL next season.