Welcome to the first pack of mid season under 25 player profiles, which features a solid core of defensemen, a former 1st round pick and a goalie who has won everything.

Welcome to the mid-term edition of the Habs Top 25 Under 25 list! Normally we'd break down each prospect one by one but we've chose to review groups of players five at a time. Obviously we're beginning at #25 and going through #21 today. 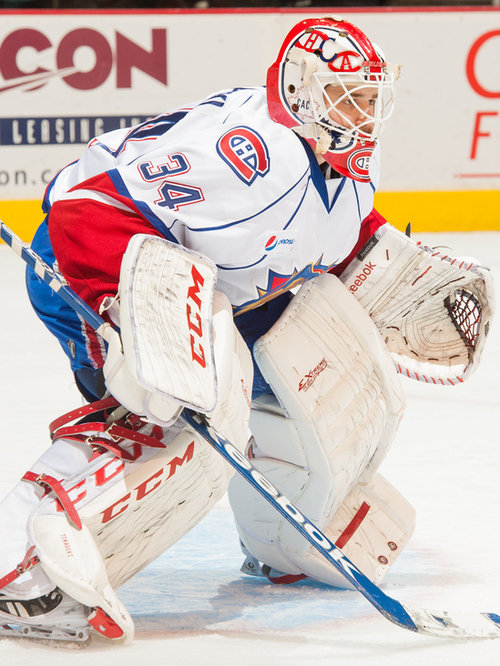 Tokarski is a new addition to the under 25 list and has moved up for a very good reason. Since being acquired for Cedrick Desjardins last season, Tokarski has firmly entrenched himself as the #1 starter in Hamilton, but also as one of the most reliable goalies in the AHL, as he currently sits 4th in GAA, 4th in save percentage, and 7th in wins. His list of accomplishments is impressive with a Memorial Cup trophy and MVP award, a gold medal from World Juniors, and 2 Calder cups. Currently Tokarski boasts a 15-7-2 record with a 2.09 GAA and a .928 save percentage. Needless to say when Tokarski starts he gives his team every chance to win. The only thing keeping Tokarski out of the NHL currently is the fantastic play of both Carey Price and his back up Peter Budaj, that is not to say I think Tokarski would be a starter for the Habs but as a backup he is a perfect fit for the role. 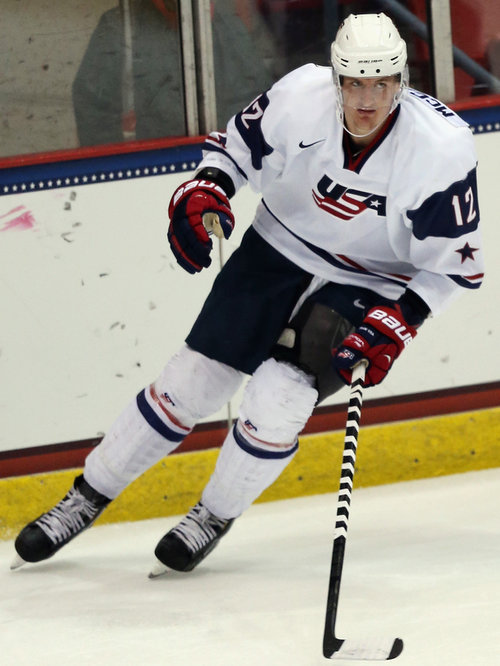 McCarron is the Habs 2013 1st round draft choice and his selection had many of us at EOTP scratching our heads because there were many far more polished players on the board when the 6'6'' forward was picked #25 overall. Though there was a lot of optimism that 18 year old behemoth could grow into a dominant force out on the ice as he possesses the skills necessary to play at a high level but had trouble consistently putting all these skills together. When given the choice between heading to the NCAA to play for Western Michigan or to the OHL to play for the London Knights McCarron would chose to join Dale Hunter and his powerhouse team in London. However McCarron has had a very rough start to the OHL season posting only 17 points in 40 games thus far. I asked a few people on Twitter for their opinion on his season so far and the reaction was lukewarm to say the least.

Looks a ways away. Pretty raw but toolsy. RT @scottmatla: @coreypronman what are your impressions on McCarron at this point of the season

@scottmatla But he's shown glimpses of being a dominant player. Sometimes he shows nice hands, speed or meanness, but those are rare. 2/2

So there is clearly a ways to go for McCarron right now but hopefully in his second year under Hunter he can put it all together and possibly make a run at making the US World Junior team next year. 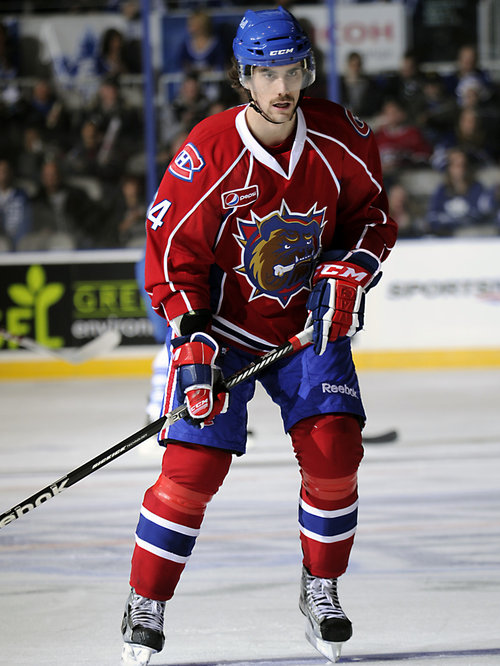 Morgan Ellis is now in the middle of his second season with the Hamilton Bulldogs in the AHL and has been improving rapidly after a dismal rookie campaign. Last season Ellis managed just 8 points in 71 AHL games and while Ellis has never been known as an offensive force those numbers are highly disappointing even for a rookie. Though he spent most of his rookie campaign playing amongst AHL journeymen and players signed to PTO deals which could be attributed to his poor showing in the stats column. This season is a different story, after being a healthy scratch to start the year Ellis found a spot for himself alongside another former Memorial Cup champion in Nathan Beaulieu. While Beaulieu is the offensive spark on the pairing Ellis plays a steady defensively solid game much like Josh Gorges or Alexei Emelin and in that aspect Ellis has shined this year. However despite a very well rounded game Ellis has yet to truly develop one standout skill that separates him from his peers, Beaulieu and Nygren both have high offensive pedigrees and Jarred Tinordi has proven he can be a capable shutdown top pairing defensemen in the AHL. Even with Beaulieu and Tinordi likely bound for the NHL by next season Ellis has to step up and prove he can be a top pairing blueliner for the Bulldogs or he could see himself passed on the depth chart by players such as Darren Dietz or Dalton Thrower in the coming season. 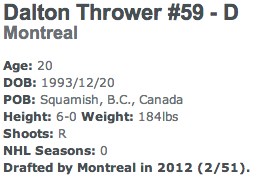 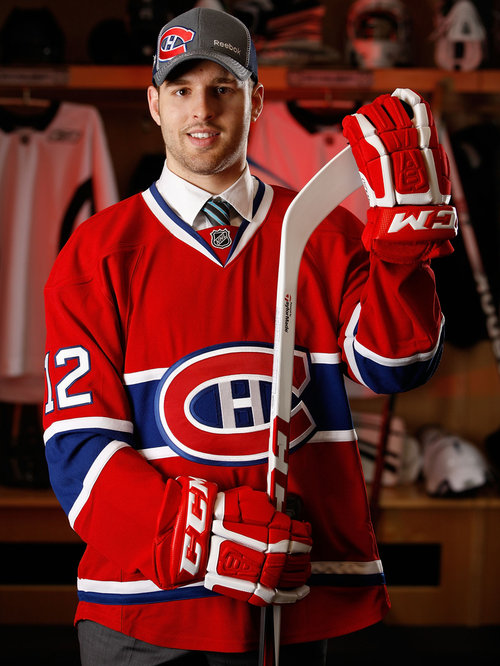 Dalton Thrower has had an up and down career in Canada's Western Hockey League which has been marked by solid offensive production at it's peak and multiple suspensions at it's lowest but the 20 year old Thrower has seemingly rebounded so far. The former 2nd round draft pick is perhaps best known for being one of the toughest guys on the ice every night and for playing an aggressive physical game. However Thrower has also shown to be a capable puck moving defensemen that is highly effective at quarterbacking his teams powerplay unit. After a disappointing 2013 campaign that saw him total only 27 points Thrower has surpassed that mark in roughly half the games played which shows that his previous season could be nothing more than an outlier. As I stated Thrower likes to play a physical game but he has stepped over the thin line a few times with his play and has been suspended for illegal checks to the head. With this being his final season in juniors Thrower is more than likely going to join former Saskatoon Blades teammate Darren Dietz next season in Hamilton and given the statistics these two have put up together this is great news for Sylvain Lefebvre who could be losing his his top two defensemen to the NHL shortly. If Thrower can reign in his reckless play his hardnosed style will surely catch the eye of Marc Bergevin and Michel Therrien who seem to be favoring that type of player. 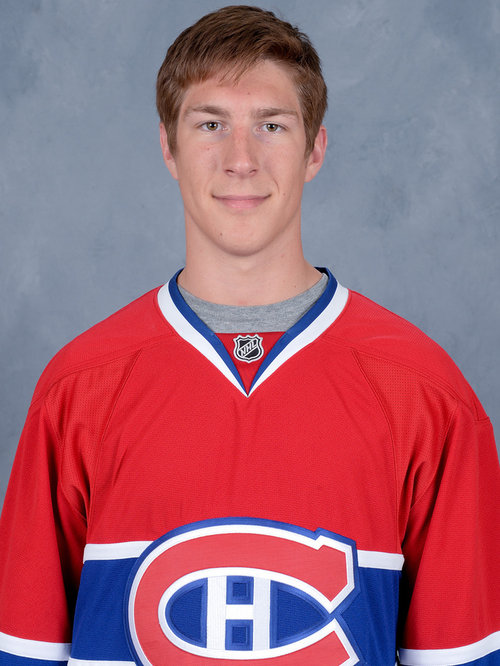 Darren Dietz is one of the Habs few offensive defensemen prospects in the pipeline currently(the other two being Beaulieu and Nygren) and despite a slow start statistically in Hamilton there is a lot to like about the Medicine Hat native. Drafted in the 5th round in 2011 Dietz has showcased strong offensive skills while he was playing for the Saskatoon Blades including a fantastic 2012-2013 season that saw him be among the top scoring defensemen in the WHL. Dietz is a strong puck moving player and has also rounded out his defensive game recently so much that he is part of Hamilton's penalty killing unit in his rookie season. However an early season injury caused Dietz to miss a good portion of the early AHL season which saw him placed behind AHL journeymen Nathan McIver and Joel Chouinard on depth chart for a few games. Despite being a very effective player while killing penalties Dietz has yet to make his mark on the score sheet as he has only tallied 4 assists in 22 games. The main reason for this may be the fact the Hamilton runs a powerplay with only one defensemen on each unit and those spots are occupied by Nathan Beaulieu and Greg Pateryn who have far more pro experience than Dietz. Much like Morgan Ellis with some prospects graduating into the NHL soon he has a massive chance to establish himself and catch the eye of the Habs management as soon as next season.