Since we started this Top 25 Under 25 series, Pacioretty has become one of hockey's most dominant left wingers. After peaking at 2nd on this list last year, he finishes out with a strong third place showing.

Max Pacioretty, a.k.a. MaxPac, a.k.a. Wolverine, has grown into an All-Star calibre (Olympian, even) left-winger since being drafted with the 22nd overall pick in the 2007 NHL Draft. The former Masterton Trophy winner has been through quite a lot, from a rapid ascension up the amateur and minor professional ranks (playing New England high school hockey, USHL, NCAA, and AHL within four years), to a frustrating adaptation to the NHL, to a sudden breakout, to getting his neck broken by an NHL superstar, to making a full recovery.

Not every prospect will have to go through what Pacioretty has in the Canadiens system and come out as one of the better players in the world. He breaks all the templates, the rare beast that puts all his skills together eventually rather than have his weaknesses and setbacks consume his development. He's had plenty of doubters, but in the end, he's turned out to be a top line player, exceeding the expectations of almost everybody.

Well, there isn't a ton of disagreement here. A couple of voters like Lars Eller better than Pacioretty, while three voters like Pacioretty better than one of the top two players on our list. While Max has always been close to the top of our list in our four years of doing this, he's never received a number one vote from our panel. So while he's been very highly regarded, there's always been someone better than he is, and that's been obvious to every panelist we've ever had.

In the past year, Pacioretty dropped one spot in the collective rankings, as we've gotten to know a certain teenage forward yet to come a little better. 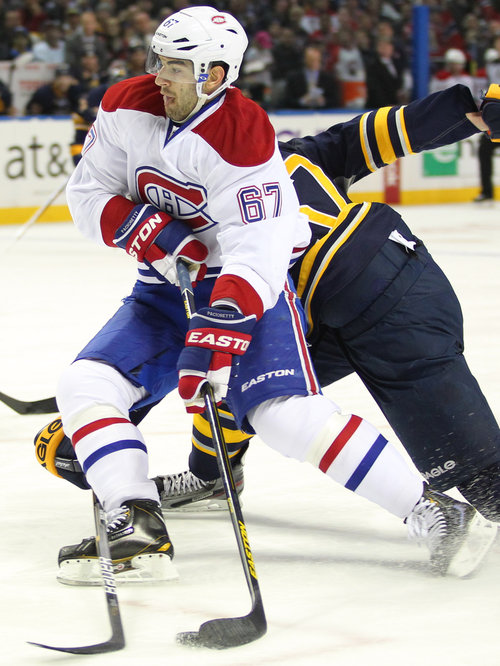 Oh yeah, that. He scores goals. Like, often. He does it with an elite wrist shot, quick release, effective snap shot, and an ability to create chances in all situations. He shoots a lot. Like, really, a LOT. If you click on that link, you can see that Pacioretty led the NHL last year in individual shot rate (shots on goal per 60 minutes of play), as well as individual Fenwick and Corsi events per 60 minutes; ahead of noted snipers like Alex Ovechkin, Evander Kane, Jeff Skinner and number five on our list, Brendan Gallagher. He's a volume shooter, who scores his goals by shooting the puck a lot, rather than relying on a high shooting percentage. His shot volume helped create rebound opportunities for noted crease-crasher Gallagher this year as well, which likely factored into Pacioretty's rising assist rate from his first two productive seasons.

Pacioretty is also a possession driving force at forward. While he's been put in offensively favourable situations with high zone start rates (63.6%, 49.4%, and 56.9% over the past three years), he's also delivered elite possession rates. Over those past three years, he has the 19th highest Corsi rate amongst forwards who have played at least 1,000 minutes. Brian Gionta was the second highest Canadiens player on that list at 66th, showing quite clearly that Max is doing this largely on his own merits. He's also a relatively decent player in the defensive zone, as Chris Boucher's scouting methods have revealed, winning a high amount of defensive zone plays despite not being used in those situations too often, with successful play rates comparable to defensive specialists like Travis Moen and Brian Gionta, even with his most common centre (David Desharnais) being the least successful defensive player at his position on the team.

While the stats collected by Boucher indicate that he has good defensive chops, Max hasn't been placed in the most difficult of situations to prove this theory. He's not much of a penalty killer, and when the Canadiens have a lead they don't tend to send him out against other team's top lines. Despite his size, speed and usage in the offensive zone, Pacioretty isn't known as a fearsome hitter to opposing defensemen, although he does engage physically with defenders.

Last year, his goal total dipped a bit, partly due to a slow start to the year, but it also seemed to be part of a strategy to take shots from further out on his line. The threat of Pacioretty's shot was used to draw defenders further out and create more space for his smaller linemates (Gallagher, Desharnais), helping Gallagher's Calder Trophy bid.

The list of weaknesses that Pacioretty has is pretty small in total. I suppose it kind of sucks that he doesn't have a relative on the NHL's disciplinary committee.

Max is a top-line winger who should be good for consistent 25-35 goal production, with trends of up to 40 in a good year. While he will likely tail off his goal scoring as he hits his late 20s, his underlying numbers suggest he should be able to add more defensive responsibilities to his game and keep up his incredibly high value to the team.

As far as that value goes, I decided to look at the top goal scorers of the past three years, and how highly valued by the marketplace such elite goal scorers are. Pacioretty came in 21st place amongst players who scored at least 50 goals over the past three seasons combined in goals per game with 0.39. Here's a table showing the salaries of the 20 players ahead of Pacioretty:

If at any point in the next few years you think Pacioretty is for some reason overpaid, please refer back to this list of players. Matt Moulson is a UFA after this year and is on a sweetheart of a deal currently, but should see a raise above what Max makes on the open market barring injuries. Logan Couture has signed an extension beyond 2013-14 that will see him take on a $6,000,000 cap hit. Those two deals will make Pacioretty making less than all of these other noted goal scorers going forward (and heck, Kovalchuk is making even more than his old Devils cap hit in the KHL). Only three players on this list are also younger than Max, which shows how impressive his goal scoring is. He should be able to stay on this list in the future as a result.

Hell, no. Sorry, Lars, Brendan, and Nathan. You ain't on Max's level. I'm not sure I'd trade Max for any combination of TWO of those players. You don't deal this kind of goal scorer. Loser organizations like Dallas (Neal), Philadelphia (Carter), and the NY Rangers (Gaborik) might trade these kinds of guys, but I'm pretty damned confident that Bergevin won't be anytime soon.

If you like Max Pacioretty and want to learn more about him: