In his final appearance on the Top 25 Under 25, Eller went out with a bang, breaking out and into a top-6 role as a 23-year-old.

It's hard to believe when you think about it, but this is the fourth summer since Pierre Gauthier made the decision to stick with Carey Price, and trade an unsigned Jaroslav Halak to the St. Louis Blues in exchange for Lars Eller and Ian Schultz. Schultz, a 3rd-round pick in the 2008 NHL Entry draft, went nowhere but down.

Lars Eller, on the other hand, has stuck between third and fourth on this list, while displaying tantalizing skills apparent to anyone with a knack for evaluating talent. The question with Eller was never about talent, but whether he would put everything together and be the player he should be. He showed improvement in 2011-12 while the rest of the team tanked around him, but in 2013 he finally broke out.

His season began with a new fitness program, as for the first time since he turned pro, Eller had a full offseason to work out without having to rehabilitate and injury. He gained 13 pounds of muscle during the lockout extended offseason before deciding to go to Finland and play in the SM-liiga, where he tore the league apart for 15 games, scoring five goals and 10 assists.

When the lockout ended, Eller expected to keep that production going, but started off slow and was scratched by new coach Michel Therrien. It was up to Eller to earn the new coach's trust, and it took longer than perhaps was justified, but by the end of the season Eller had not only found a niche as the team's second line center, but he'd found a thoroughbred to hitch his wagon to in linemate Alex Galchenyuk. The two had instant chemistry, and Eller's 30 points in 46 games represented a career high, and a pace worthy of first-line minutes.

At this stage we have a relative consensus for the players most years, but there's more variation with Eller than I expected. A swing of four places is nothing when you're in the teens, but this high in the rankings is very surprising. The biggest swing likely comes from different valuations placed on positions (Bruce likes Beaulieu), and some putting more faith in Eller as a proven center than others. 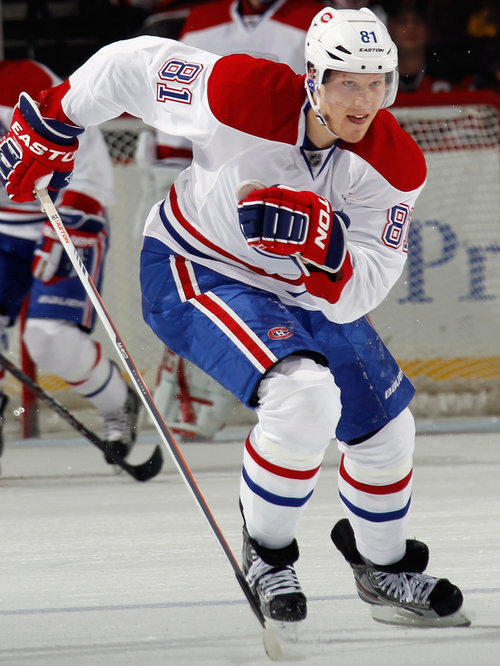 The best thing about Eller is that he has a ton of elite level tools. Several years in a row now he's won the fastest skater competition on the Habs, and it's easy to see that when he gets a step on someone, he's gone. His long, smooth stride allows him to almost glide away from players effortlessly.

After some questions last year about his playmaking abilities, Eller stepped it up in a big way this season with 22 assists in 46 games, equalling his output over the previous 163 games of his career, a startling achievement. Finally playing with linemates who were able to score allowed Eller to display his hockey sense and passing ability, which while not on an elite level, are worthy of a top-2 center on a playoff team.

He's not Pavel Datsyuk, but Eller's puck skills are a big part of his game. He is among the top stickhandlers on the team, right up there with Tomas Plekanec and Alex Galchenyuk, and seems to get better each year. He can beat players one-on-one, or simply just create space with a deft little maneuver.

Eller's shot is nothing to shrug off either. His snap shot has gone from nearly harmless in 2011, to quite the cannon nowadays.

Eller's greatest asset though, is his defensive awareness. When he was a rookie in Montreal he played a checking role but found it difficult. Since then, he's dedicated himself to being better defensively and becoming a solid shutdown center, and one of the NHL's most effective penalty killers. There weren't many games that went by last season where Eller didn't create a turnover that resulted in a scoring chance for the Habs. His increased strength allowed him to win battles for the puck like never before.

Though he's rounded into an excellent player, Eller does have some easily identifiable weaknesses. Though his shot is good to great, his release leaves something to be desired. Unlike a pure scorer like Max Pacioretty, Eller doesn't often get his shot off quickly, which sometimes means that by the time he shoots, the best possible scoring chance is no longer available. Eller also isn't a high volume shooter, though he is improving in that regard, it won't be enough for him to ever be a big scorer in the NHL. 20 goals is possible, maybe even gusts up to 25 every now and then, but 30 is not something we should ever expect.

Even though Eller used his linemates this year far better than he ever had before, he's still often guilty of trying to do too much. He doesn't quite go full-Kovalev, but he does force plays that aren't there at times, which can lead to the play going the other way. Luckily, he'll be the first guy back on the backcheck and take the puck away.

Eller's most consistent weakness over his tenure in Montreal has been his lack of discipline. He's not the worst player for taking penalties, but he does take quite a lot. Frustratingly his penalty minutes per game have been on the rise over the past three seasons, and he'll need to cut that down in the future, the team needs him killing penalties, not taking them.

We're in pretty safe territory with projecting a 24-year-old that we've been watching in the NHL for three seasons. Eller is on the way to being a top-end, tough-minutes second line center, who may even gust up to Tomas Plekanec level, giving future franchise center Alex Galchenyuk a 1B center. Eller is going to continue to increase the quality and quantity of his minutes, hopefully with offensive production similar to last season.

Eller has gained an extra seven pounds of muscle this offseason, meaning he should be even stronger next season, which fits with his new, more physical style of play.

As always, we ask if you would trade him for someone previously listed. I know I wouldn't, but it's up to you.

If you like Lars Eller and want to learn more about him: