Rookie of the year finalist Brendan Gallagher cracks the top 5 after a dream debut season with the Canadiens.

Brendan Gallagher was possibly the best surprise the Canadiens had during their 2012-2013 campaign. The feisty, diminutive forward finished tied for first with Max Pacioretty for the team lead in goals. His stellar play at both ends of the ice led to Brendan receiving the honour of being a finalist for the Calder Memorial trophy (where he finished 2nd in voting), and a spot on the NHL All-Rookie team. Impressive for a player that most thought would spend the next few years in Hamilton, due to the plethora of shorter players that the Habs already had on their roster.

Gallagher burst onto the scene by registering an assist in his first NHL game, and scoring his first NHL goal two games later versus legend Martin Brodeur.

His ice time was mostly split between two different lines, with the majority of his minutes coming from his use on a line with Max Pacioretty and David Desharnais (404:31 TOI). He started the year on a line with Brandon Prust and fellow rookie Alex Galchenyuk, where he logged 70:31 minutes of ice time.

Gallagher also spent some time with Lars Eller and Alex Galchenyuk towards the end of the season, and although they only played 34 minutes and 35 seconds of even strength ice time together, which is a very small sample size, they produced the best goals scored / 60 min TOI on the team, at 6.9 goals per 60 min. His GF per 60 min EV dipped when playing with Pacioretty and Desharnais, to a more sustainable 3.8 goals.

When looking over the productivity of our most used lines last year, it's impossible to ignore that every time Gallagher was added to a line, he outproduced the teammate he replaced.

Our panel was almost unanimous in their placement of Brendan Gallagher. The only minor outlier was Justin, who placed him at #3. The 11 other panelists listed him at #5. This happens to be the most consistent voting in our Top 25 under 25 so far, which is to be expected as we reach the top 5. 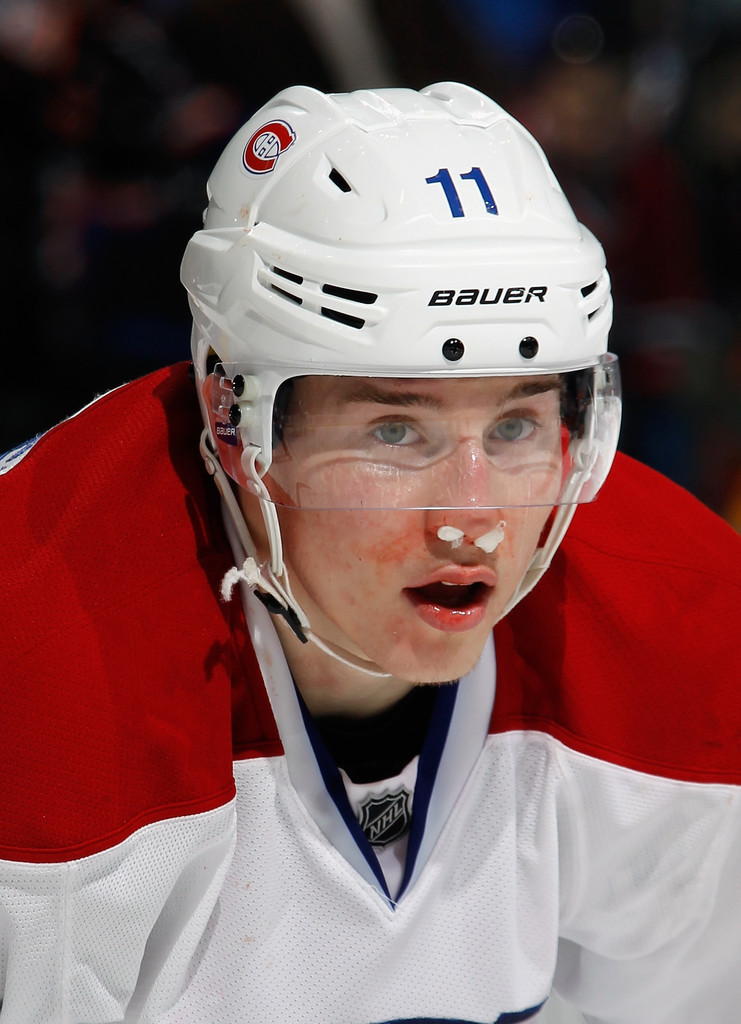 Gallagher is the epitome of a workhorse. He may only be 5'9", but he plays bigger than most of the Montreal Canadiens roster. However, this attribute is not a surprise for those of us that have followed Gallagher's development path. He's always gone straight to the net and has never shied away from going into the dirty areas. His style of play has evoked jealously from honey badgers around the world, as they wish they could be as intense as the young Canadiens forward.

His effort level will continue to be his biggest strength, however we can't ignore his other assets.

He possesses a great release, and has quickly established himself as one of the best shooters on the team (12.8% shooting percentage, 3rd on the Habs). He repeatedly beat goaltenders with clean shots, often using defenders as a screen, à la Kovalev.

Gallagher also produced the second most shots per 60 minutes of ice time in the NHL last season at even strength, behind only teammate Max Pacioretty.

His speed & high-end agility afforded him the advantage of creating several high quality scoring chances, as he has shown time and again that he can easily shed defenders and quickly find the open ice.

Of course, when discussing Gallagher, it's impossible to ignore his frame. He is undersized compared to most NHL players, and regularly takes a beating as his style of play leads to a rather large physical toll brought down on the small forward.

Many have pointed out that this may lead to a shortened career, or that Gallagher should change his style of play. Of course, this would be a huge error, as his nose-to-the-grindstone gameplay is what got him to the NHL, and without it he'd just be another undersized forward trying to crack the "fringe line" of the NHL.

It's important to note that Gallagher suffered a concussion this season. Be that as it may, he recovered reasonably quickly and only missed three games.

His defensive play should also be considered a weakness, as he could stand to improve his defensive positioning and coverage. With another year under his belt, I assume he will polish this aspect of his game, since he doesn't have many other weak points in his game that he needs to drastically improve.

There is no question in my mind that Gallagher will soon establish himself as a solid top-6 winger for the Habs, although one could argue that he has already attained top-6 status with Montreal. His scoring ability, reasonable defensive play and relentlessness effort will ensure that no matter what coach is at the helm of the Habs, Gallagher will be one of his favourite players.

The ever-smiling Gallagher may fall victim to the feared sophomore slump. However, due to his limited weaknesses and insane effort level, I doubt he falls off the radar next season. I expect him to slightly increase his productivity, and would be satisfied with a 60-point season. Although if he repeats his rookie production over an 82-game schedule, there would be absolutely no disappointment from my point of view.

We can't forget that he was a 5th-round pick, and for many he has already surpassed his expectations. I don't think he'll ever crack the 75-point plateau, however expect him to maintain his strong play throughout the 2013-2014 campaign.

Endurance won't be a problem through an entire season, as Gallagher seems to have an endless gas tank.

Although I consider Collberg and Lehkonen to have a higher celing than Gallagher, I wouldn't be willing to trade a proven (albeit only for a half-season) NHL goal scorer for an asset that is still a few years away from cracking our roster. Gallagher is helping the team win now, and odds are he will continue to contribute to the success of the Canadiens for the foreseeable future.

Pro-rated, Gallagher would have scored 28 goals last year in an 82 game schedule. His shooting percentage may dip a little bit, but it was not necessarily at an unsustainable level. He took the second-most shots of any rookie last year (117), and I am quite confident that his shooting ability will continue to produce a steady flow of goals at the NHL level.

Not many players can crack the 25-goal mark in their rookie season, especially with limited ice time that Gallagher received (13:51 avg. per game, albeit with 2:21 PP TOI per game).

The only other prospect I would consider trading Gallagher for would be Nathan Beaulieu, but this has more to do with our lack of puck moving defensemen among our prospects, than Gallagher's value.

That being said, ultimately I would retain Gallagher's services over everyone else that has already been listed in our Top 25 Under 25.

Do you agree? Let us know in the comments below.

If you like Brendan Gallagher and want to learn more about him: