Coming in at number six on this year's countdown is Nathan Beaulieu. The Hamilton Bulldogs' MVP of last year has been a mainstay in our top 25 for some time. While he comes in one spot lower than last year, he is still number one among all non-full time NHL players.

Nathan Beaulieu was perhaps the steal of the first round in the 2011 draft, selected by the Habs at 17th, despite being projected by many to go in the top 10. I distinctly remember being thrilled at the time of his selection; a feeling that has not gone away. Beaulieu is an excellent prospect on the blue line, offensively gifted and a powerplay specialist. Graduating from the QMJHL last year, he went on to take MVP honours with the Hamilton Bulldogs. He tied for the team lead in scoring with 31 points, and looked great when he was called up to fill in with the big club. At this point, Beaulieu seems poised to become a regular with the Canadiens in the next year or two, and has the potential to be a star.

There is some caution in the positivity surrounding Beaulieu's potential after legal trouble towards the beginning of the NHL playoffs. Yes, it is true that Brolieu Beaulieu and his father recently pled guilty to assault stemming from an incident at a party, but that is entirely irrelevant to his pro hockey career in my opinion. He was granted a conditional discharge, which means there will be no impact on his ability to travel across the border to the U.S. Also, he's not the first hockey player to have a few drinks and do something silly, and definitely won't be the last. If anything, this situation probably showed him what could happen if he's not careful, and I'd bet he takes that to heart.

Voting was pretty consistent for Beaulieu, with all voters putting him in the top 10 and a low ranking of eight. I was one of the two to put him at eighth and I'll explain that in a bit. I think him dropping one spot has more to do with the rise of a certain prospect, who I'm sure you'll know, than it does with him. 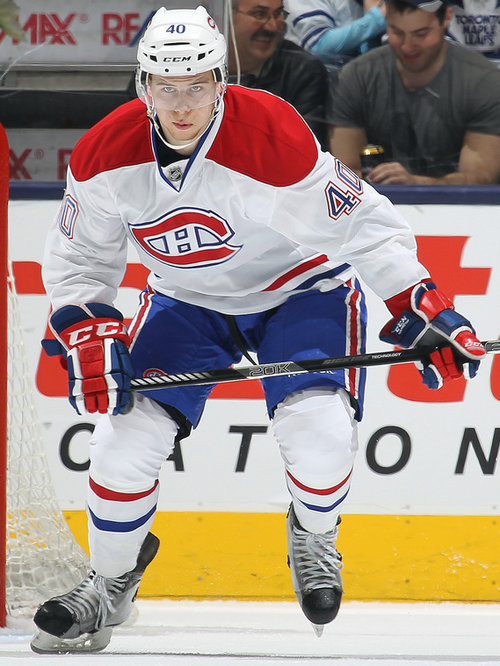 This guy is the prototypical offensive defenceman. He has great speed, a great shot, great puck skills and great vision. It's like he was made to quarterback a powerplay, as his shot and passing make him a major threat from the point with the man advantage. He puts a lot of shots on goal, which shows he's adept at picking his spots and finding the right shooting lanes. I drool at the thought of him and P.K. Subban playing together on the powerplay one day, as they are opposite-side shots and could make for an epic tandem.

From what I've seen of him, I'm willing to call him nothing short of an elite level skater. He accelerates well and has next-level speed that is uncommon in most defenders. In transitional play, his skating makes him a huge asset, as he can get up in the rush and get back to his zone in a hurry. He's responsible in his own zone and I think he makes a good first pass breaking out when he can't use his skating to carry the puck.

He's not a very large defenceman, but he plays physically and is known to drop the gloves from time to time. He has room to put on muscle and become a more physically imposing player, but that's not something that will make or break his ability to play in the NHL. I'd prefer not to see him doing too much fighting in Montreal, but he's no slouch with his hands, and sticks up for his teammates when he needs to.

He needs to be a bit more careful in his own zone. While he has excellent defensive skills, he has a tendency to make that one mistake that leads to a goal against, and is thus highly visible. He didn't make a whole lot of those mistakes in Hamilton, but in a market like Montreal, any of those high-profile brain cramps will be put under a microscope. It might sound like I'm contradicting myself, since I just said he's a responsible defensive player, but the reality is he just needs a bit more maturity in his own zone. Beaulieu isn't a habitually high-risk defenseman like a Marc-Andre Bergeron, but mental mistakes do happen. He has room to grow in this area if he's willing to work at it.

I've heard and read people questioning his character and off-ice conduct, mostly due to the assault incident. While isolated incidents are easily brushed aside, it only takes a hint of bad behaviour before the incident will be brought up again and again. Many players Beaulieu's age make mistakes, but he got caught and that's something he'll have to work through and prove won't happen again.

Beaulieu will probably begin the season in Hamilton, but I'm sure we'll be seeing him in the CH more than once. While he's in Hamilton, I'd expect the reigning MVP to take on a big role as a leader on a defense squad that has lost veteran St-Denis, and is made up almost entirely of players under 24 years of age. With Alexei Emelin presumably out for a good portion of the season, Beaulieu and Tinordi could both see a good amount of NHL action if any other injuries strike, and will be battling to prove they have what it takes to stick. Look for Beaulieu's powerplay abilities to be put to use as he tries to prove he's the number one call-up this season.

It's pretty much a consensus that he projects as a top four defenceman in the NHL. When he does make the permanent jump to the big club, I'd expect him to be in a third pairing role, from which he'll develop into a more expansive role. I think it's obvious that he should become a mainstay on the Canadiens power play once he joins the club for good.

While it's pretty unfair to compare any defensive prospects to the awesomeness that is P.K. Subban, I see similarities in their games. I'm not saying Beaulieu will be another Subban, but that is what I believe to be his ceiling. He has all of the offensive tools, and will get the opportunity to learn from the reigning Norris Trophy winner in due time.

Ok, here's where I explain my ranking. I had Beaulieu at eighth because I'm really high on Sebastian Collberg, and I was just slightly more impressed with Jarred Tinordi as a call up last year. That said, I would probably trade any of those three for one of the other two without losing sleep. These are three players I value very highly and I'm quite glad that all three will probably one day be regulars in the CH. Now it's your turn, would you trade Beaulieu for anyone behind him on the list?