As Jarred Tinordi gets closer and closer to the NHL, his ranking on this list continues to climb little by little. The towering defensive defenceman is up one spot to seventh in this year's edition of the Top 25 Under 25.

Jarred Tinordi is a pretty rare beast in the Canadiens prospect pool. Montreal generally prizes skill at all positions, but the defensive defenseman has a longstanding role in hockey, preventing chances against and winning puck battles, and this is undoubtedly the role Jarred Tinordi was picked 22nd overall in 2010 to fill. Because if he was picked for his offence, well, there'd be a lot of explaining to do.

This specialized role for Tinordi makes it much harder to rank him against the other players without repeated viewings. Fortunately for us, Tinordi has been in the spotlight a fair bit for a player his age: he made the both the American U18 and U20 teams, played a lot of minutes on a Memorial Cup contender, was a feature in Hamilton's top 4 during the NHL lockout and played 13 regular season and playoff games as a rookie in 2012-13. His adaptation to each level of play has been impressive, and it's safe to say the more we see, the more confident we are in his future as a NHLer. It's increasingly becoming not a matter of if he will become a NHL mainstay, but when.

As you can see, the voting range is narrowing significantly as we get closer to the top. Still, there was quite a battle for the title of "Most Valuable Player not in the NHL", and to five of our voters, Tinordi ended up being that guy. Tinordi moved ahead of 2009 first rounder Louis Leblanc in the collective eyes of the panel (11 out of 12 panelists supported this claim) and he is the first player on our countdown to be unanimously viewed inside the top 10.

From a personal standpoint, although my ranking was one of the lower ones in the group, it was actually a jump of seven spots from a year ago, as his adaptation to pro hockey truly impressed me this past season. 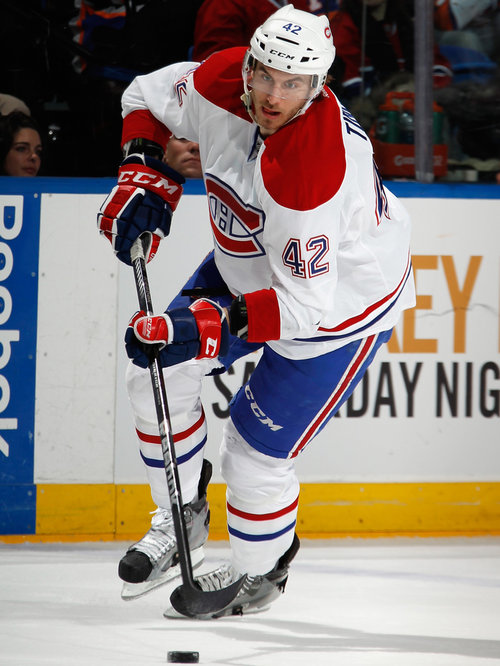 Jarred is excellent at limiting scoring chances in the defensive zone. His big strides allow him to keep up with speedier forwards, and he takes a conservative stance when closing in on a forward outside the scoring areas. His defensive awareness is well above average for a man his age, gaining the trust of his coaches to use him in tougher defensive assignments at the minor professional level. His long reach disrupts passing lanes and is an asset on the penalty kill.

It's tough not to mention his size as his obvious strength, but he is more than a giant behemoth in his own zone. This should set him apart from past defensemen drafted early for their extremely large, freakish some might say, frame. Indeed, if Tinordi sticks, he would be almost the equivalent of finding that rare needle in the haystack... The gem that breaks the mold. Kind of like Timmins finding three straight NHL talents out of Belarus, or drafting the All-Star goalie in the top five of the Draft, or the superstar centre that played eight games the previous year and makes the NHL the next. Timmins may have been impressed by Tinordi from a physical point of view, a man that could deliver eye-popping bodychecks and dominate physically, but he got a guy that could think and read the game at a high level as well.

An ideal Jarred Tinordi shift is one in which a scoring chance against is thwarted, not one in which Tinordi steps up to create a scoring chance for. To put it modestly, keeping the puck on his stick is not the wisest offensive strategy. Tinordi offers below average puck skill, although he's capable of making a simple breakout pass as his long reach does allow a bit more of a passing lane. 'Off the glass and out' is a pretty extensive part of his arsenal, which isn't the most effective tool for creating offence. His size and strength give a little bit extra to his slapshot, but he needs some time and space in order to tee it up.

That lack of offensive prowess does limit his upside in the NHL significantly. Puck skills are a very important part of the position at the NHL level, with approximately less than a third of the defensemen who finish in the top 120 in icetime (i.e. a top 4 defenseman) doing so without playing regularly on the power play. That number diminishes even more when limited to top pairing players, with only about 13 or 14 (since 2005-06) of top pairing even strength blueliners per season not being valued for their puck skills per season.

And that only is on a season by season basis: some of these heavily used 'defensive defensemen' have been offensive contributors in the past, such as Ron Hainsey, Jeff Petry, Brad Stuart, or Braydon Coburn this past season. These players presumably haven't lost their puck skills, and those skills probably aid their ability to carry a heavy responsibility. For Tinordi to achieve a long career in a prime role, he'll have to be exceptionally good defensively (or play for bad teams like Luke Schenn does, that always helps).

It may seem early to be pressuring Tinordi into making the show, but clearly these are an important twelve months for Jarred. Things are looking good, what with him playing a regular shift in the NHL playoffs and all, but each new year offers it's own challenges and clearly Montreal isn't prepared to hand him a spot out of training camp, with the late summer signing of Douglas Murray to a one-way $1.5m contract. That leaves eight defensemen on one-way deals for the Canadiens, and likely closes the open spot on the Canadiens lineup that Tinordi had been filling late last season. Tyler Dellow looked at the career trajectory of top defensive defensemen and noted that by age 23 almost all of the CHL trained defensemen were well established as NHLers. With that in mind, here's where Tinordi looks compared to the league's most prominent defensive defensemen since 2005, followed by some suggested comparables by our Twitter followers:

Obviously, the NHL/Minor U21/U22 columns refer to games played at those levels by that age, which includes playoff games. The numbers under "Top 2" and "Top 4" refer to qualifying seasons as a purely defensive defensemen in each category. Any missing seasons for the players either meant they suffered a major injury, played on the 3rd pairing, or got a notable amount of PP time (Regehr once played over 2 minutes a game on the PP in Calgary if you can believe it).

Jarred Tinordi produced 0.19 Pts/GP in the AHL last year, playing on an awful offensive team. I doubt he'd score that low if Hamilton had been a regular scoring team, so I think it's fair to bump him up to at least 0.25, or include all those 0.33 or below. Some of the players made it to the NHL later due to finishing their degrees in college (Orpik, Scuderi, Gill) or apprenticing extensively in European pro leagues (Hejda, Skrastins, Lydman).

In that sense, you can see that there is a small, but notable group of well regarded NHL defensemen that produce offence at a similar rate to what Tinordi did: essentially not getting involved at all and picking up the odd point just from being on the ice a decent amount. He's trending similarly to Bryan Allen and Niklas Hjalmarsson, while he's a bit behind the likes of Tim Gleason, Brendan Witt, and likely Barret Jackman (who won the Calder Trophy at age 21). He's ahead of Colin White, who had a very good NHL career both pre and post the 2004-05 NHL lockout.

Now on to the Twitter suggested comparables (sarcastic choices included):

Jarred tracks nicely to Ken Daneyko, who played a heck of a long career and was part of three Championships with the Devils. Gill and Murray both went the college route, delaying their arrival. Gill has had a heck of a career, staying healthy while posting a career high of only 22 points in a regular season or 2 points in a playoff. Murray was a better producer of offence than Jarred but did it at a later age. Komisarek tracks comparatively but the guy actually had some noted skill with the puck at lower levels that didn't appear at all later in his career. Derian Hatcher is a far-fetched comparable, he made the league very early, produced some offence in the NHL, and is a borderline Hockey Hall of Famer. Jarred tracks similarly to his dad, who stayed in junior as a 20 year old but quickly worked his way through the minor leagues. However, Mark was a much more accomplished offensive blueliner than his son. The 'bigger Gorges' theory is a nice comparable as well.

We'll see if Tinordi can work his way onto the Canadiens during the 2013-14 NHL season as it develops. He'll likely start the year in Hamilton, but is going to be a top option for a callup depending on what is required at the NHL level. If he adjusts to the AHL as quickly as he adjusted to the OHL, where we saw a significant jump from him in his second season, he'll be in the NHL permanently by 2014. It's unlikely he'll ever be a high end NHL blueliner, but a long career is definitely within reach.

There's a clear gap from our panel between Tinordi and Collberg. Only Andrew would take Collberg (as well as Lehkonen) over Tinordi, while Chris would prefer Leblanc, and I have Bozon ahead of him. The rest of the panel prefers Tinordi to everyone mentioned already, and five of those nine prefer him to a player ranked ahead of him. The evidence for Tinordi to make it in the NHL is pretty strong, and as I've shown, it's not out of question for him to have a long, significant career even with his limited offensive upside. Is there anyone ranked lower than Jarred you'd take a chance on ahead of him?