The recipient of the honour of the top Under-25 player should be no surprise. One of the highest-impact players in the league and arguably the most entertaining, P.K. Subban is every inch the star attraction of the Bell Centre. The 2013 Norris Trophy winner is the cornerstone of the current Montreal Canadiens and the centerpiece of any hope to compete in the near future.

2013 was the season where P.K. Subban finally got some of the recognition that he deserved. An offensive explosion on the power play with Andrei Markov ballooned his point totals and suddenly put him in the discussion as one of the top players at his position in the game, something which those who follow the numbers closely already knew he was. Subban has come up with a bumper crop of elite young defensemen that have come into the league in the past three to four seasons and none of them is his superior.

By the metrics, it's more difficult to find an area where Subban isn't good than it is to find one where he's elite. Among defensemen (with 3000 minutes played) at 5-on-5 over his first 3 seasons he is:

All while averaging relatively difficult minutes and not playing for powerhouse teams.

On the penalty kill among those with 300 minutes played over 3 years Subban is:

Finally, on the power play Subban is:

Over the past two seasons, the Habs have been about half a goal better on offense (+.47 goals for) and defense (-.48 goals against) with Subban on the ice compared to when he wasn't. He has also averaged a Corsi relative of 10.1 over his regular season career, with even more absurd playoff numbers.

On the basis of the evidence, it is more than fair to conclude that Subban is a dominant defensive defenseman, with a major talent for opponent shot suppression both 5 on 5 and short handed, packaged with one of the top power play point shots in the game. Combined with his shots against suppression, he is no slouch at protecting his goaltender either. Over the past two seasons his on his save percentage at 5 on 5 is a very high 93.2%, behind only Diaz among regular Habs defensemen. And if you believe our Chris Boyle, this is no fluke, Subban is simply a vacuum for rebounds and other loose pucks in the dangerous parts of the defensive zone. Subban is likely one of the best shutdown defenders in hockey and to the wider hockey world he is still better known for his offense.

He also managed an absurd 64.1 percent of Fenwick events in his favour with the score tied in his Norris season. Since Corsi/Fenwick began to be recorded in 2007-08, only Nicklas Lidstrom and Niklas Kronwall on that absurd 07-08 Red Wings team, and the 2013 Jake Muzzin season where he played heavy offensive zone starts with Doughty, and the Fenwick dominant Kings forwards have broken 61% Fenwick tied. Muzzin had Williams, Kopitar and Brown as 60%+ Fenwick tied forward teammates, the Red Wings had 7(!) ~60%+ Fenwick tied forwards, showing how much more that was a team effort for the other three. Montreal was 2nd in the league in Fenwick tied with 56.1%, but without Subban on the ice they were barely above 50%. It is not a stretch to say that PK Subban is the difference between a top puck possession team and an average one on his own. It also suggests that Subban's +17 goal differential in 42 games was based much more on dominant team play than percentage luck. Sure he had softer minutes than usual, but he laid an unmerciful beat-down upon his opposition in what still averaged to 2nd pair usage, and his performance actually increased when he was given top competition.

Go on, tell me he didn't deserve the Norris. I dare you.

Because the voting panel are neither feckless idiots, nor butthurt Senators fans, PK Subban took the first spot in all votes taken. This is the first time in EOTP history that there has been a unanimous number 1.

If we're going to list them all out, what better place to start than physical strength. Subban eats entire cows and works out obsessively in the off-season, combined with a freakish genetic makeup this makes him look like he's auditioning to become a superhero if the hockey thing doesn't work out.

If you believe in clutch, he's pretty good with timely goals.

Videos aside, Subban is a rare combination of talent with the puck, skating ability, physical strength and the hockey sense to make it work that forms an all round elite player.

And he's a pretty good interview. 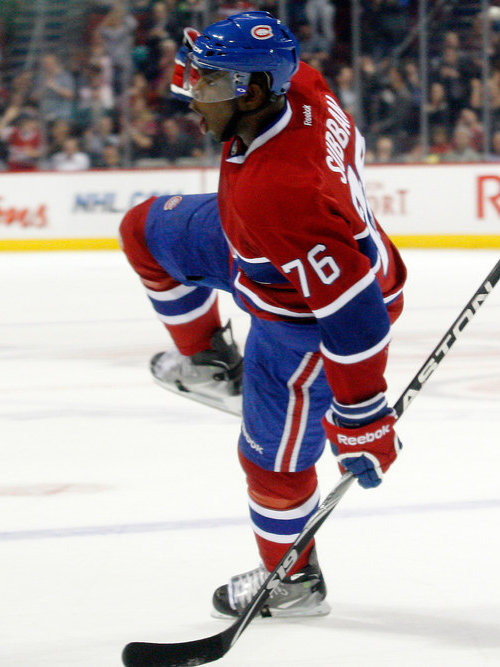 Subban at this point isn't a top level power play quarterback, he doesn't have the same wizardry that a player like Markov can bring to breaking down opposing defenses. Also he isn't Zdeno Chara/Chris Pronger ginormous which probably limits him to being one of the top defensive players of his generation rather than being historically great at the shutdown role. Some may question his defensive decision making. I say with results like that, perhaps you should consider if maybe you're idea of a good defensive decision doesn't apply to Subban, who plays hockey like Nietzsche would want us to; seeking the best path, regardless of the sterile dictates of traditional hockey moralists.

Perhaps Subban's only real weakness is a tendency to go for the big hit, which can put him out of positions. Even so, he still picks his spots pretty well.

Also, not such a great employee.

Sidney Crosby. I might be persuaded to go down to Malkin.