The Swedish sniper Sebastian Collberg is considered to be one of the Habs most offensively gifted forwards prospect, which has earned him the 8th spot in our rankings.

Sebastian Collberg is a hard prospect to peg exactly. In peer-to-peer competition, whether in Swedish juniors or head-to-head against the best of his age group in international play, Collberg has ranged from solid to dominant. With 17 points in 14 games of U20 and 25 in 16 games of U18, Collberg is a fantastic 1.4 points per game in junior international play. Sweden has been able to rely on him as a pure offensive weapon and with his 19-year-old tournament still upcoming, it is fairly likely that Collberg will end up one of the all-time top scoring Swedish international junior players. Another 7-point campaign would give him 20, which is good for the top-10 of Swedish players at the WJC.

On the other hand, there isn't that much to brag about on Collberg's play in Swedish adult leagues. Collberg struggled to crack a very deep and talented Frolunda forward group and as a result posted only six goals and nine points in 35 games, particularly because many of those goals were actually from scoring the winning shootout goal. It was not particularly uncommon for Collberg to dress but not play, or only see 4th-unit time in 2012-13 and as a result, he only averaged 10 minutes of ice time per game. In that context, his 1.09 shots per game is actually fairly strong on a per-minute basis. 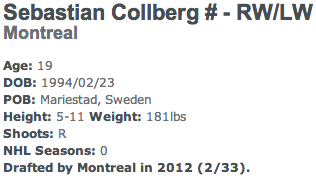 Collberg is a strong consensus pick with the voters agreeing that he is in the 7-11 range for the top 25. As such, he ends up being the top prospect outside what might be called the consensus top-seven, the leader of a tight pack in our rankings ranging from Collberg to Tim Bozon. As such, Collberg could be considered to be the most valuable of the Habs prospect forwards that are seen to have good shots at being top nine level forwards in the NHL. 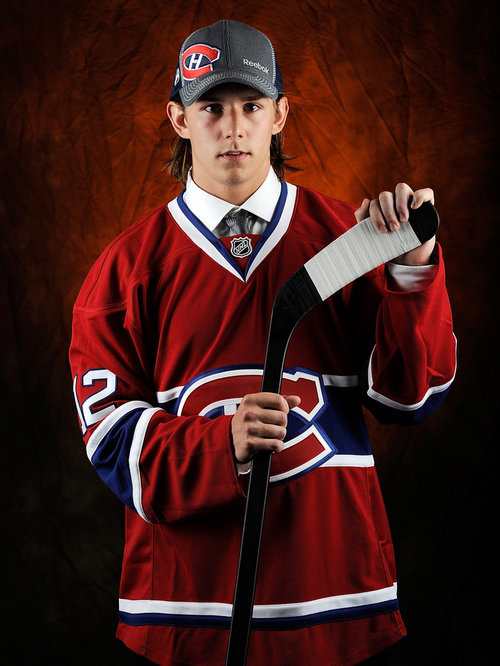 Shooting, shooting, shooting. This is immediately what stands out about Collberg; he is a natural at both the art of getting the puck in position to shoot, and beating goaltenders with his shot tool. He is elusive through traffic, allowing him to get in scoring position close while also being fast enough to generate opportunities for himself off the rush. Once in position to score, he is lethal with an NHL-caliber wrist shot. Collberg's strong offensive instincts and puck skills can also be dangerous at setting up his line-mates to score. Collberg likely has the best pure offensive ability of any Habs prospect that has not yet graduated to the big leagues.

Collberg has also shown such an ability in the shootout that he may well develop that into an elite tool.

The most obvious weakness for Collberg is strength, being a relatively short and slight 5'11 and 180 lbs. A big concern would be that he will lose effectiveness if playing against stronger players, particularly given that he seeks high-percentage shooting positions where bruising defensemen also tend to congregate. While he is a dominant player against his age peer group, Collberg has struggled at playing against higher-level opposition. Collberg also isn't much of a two-way/puck possession player presently against said higher-level opponent. Whether he can turn into an impact player in his own right or just become a complementary specialist is an open question.

Collberg will be playing in the recently re-monikered top Swedish league. Even with a change in coaching staff, I doubt he will get the kind of minutes to put up really impressive numbers. There is a decent chance he only plays as a top-nine winger with some powerplay time. One more year in Sweden, and then he is likely to move to North America for one to two seasons of AHL apprenticeship before moving up to the NHL.

Collberg's skill set suggests that if he does make it to the NHL, it will be likely on the back of his particularly remarkable offensive zone skills. Currently, the consensus on his ceiling is as a genuine top-six winger that relies a bit too much on his teammates to play 200 foot hockey while Collberg would be primarily responsible to produce goals and potentially used as a top-nine offense/shootout specialist. On the other hand, he does have the talent that becoming a bonafide top line winger isn't out of the question.

Collberg is the leader of a tightly-ranked group with Leblanc, Bozon and Hudon in the mix. I'd expect there to be a few readers who would take one of them over Collberg. I don't think many would take him over the members of the forthcoming top-seven, though. Collberg is a big unknown at this point because he is a long way from NHL ice, but he likely has the highest upside of the players reviewed so far.