An ongoing figure in the Top 25 Under 25 segment, Leblanc saw his first negative post-draft season since he was selected by the Montreal Canadiens and finds himself losing ground versus his competition.

It is interesting for me to be writing about Louis Leblanc. It is like coming back to where it all began for me regarding studying prospects. The 2009 NHL Draft was the first one I ever watched and I had many wild expectations of Louis Leblanc at the time when I saw him selected at 18th overall. Reviewing him is kind of a stark reminder of how little I knew about prospects at the time. He is a good touch stone (for me) about how you have to learn to measure expectations about a prospect.

Leblanc lost some ground this year due to the swelling of the Canadiens' farm system and owing to an ill-favoured season. He stands at 9th overall this year, after being ranked 6th in both 2012 and 2011 and even holding at 5th overall in 2010. He normally held his position on the merit of being a steady riser in his development and never stumbling. Unfortunately that closed out this year as Leblanc suffered a high ankle sprain three games into his AHL season after he fell down in a fight he shouldn't have been involved in. His return to Hamilton was rough and he never seemed to regain his form.

With the farm system expanding in scoring talent at a rather notable rate in the last two years, Leblanc now finds himself a bit under the gun to make the NHL in a Canadiens uniform.

As you can see, there was not that much controversy regarding Leblanc, despite his rocky season. He received four top-10 votes with Chris giving the largest vote of confidence with 7th, while Ian and Justin were the most skeptical ranking him at 14th, but that was as low as anyone considered him. I had him ranked one notch higher but that's pretty immaterial. I would credit his placement to a generally steady progression despite last year's slump since he was selected in 2009. 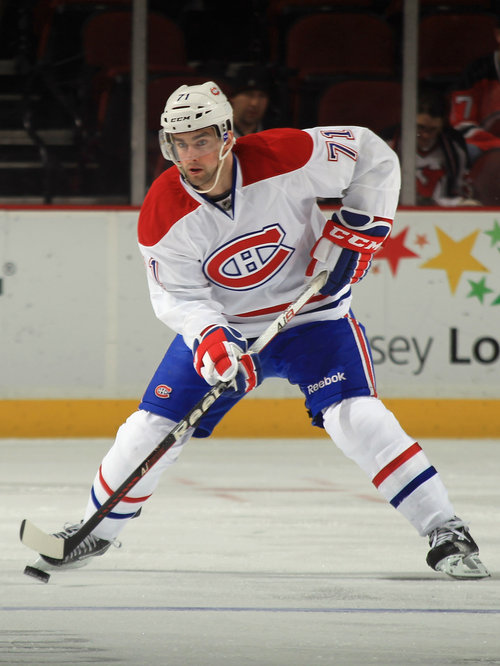 Leblanc is not too dissimilar to recently profiled Tim Bozon, in that he possesses a set of good skills, but does not tend to excel to a high level at any of them. He has displayed a good shot and tends to be a high volume shooter, but will never be confused with a pure sniper. Good puck skills are apparent and he is considered to be highly effective along the boards in puck battles, aided by surprising agility on his skates despite not being an overly quick straight-line skater. He displays good vision and defensive ability as well.

The lack of a standout skill is hurting Leblanc a bit as he doesn't have any particular ability that raise his profile as a tool that distinguishes himself from his peers. Also of concern is his strength; while Leblanc is no "smurf" his 6' frame is rather lean and leaves him at somewhat of a disadvantage. He has struggled a bit matching up physically against top peer competition. His overall skating is a bit of a hindrance as well, it is at most average and, despite his agility, he does not match the speed of most of his direct competition.

Leblanc is at a crossroads with the Canadiens. He is coming off of a bad season and finds himself with several skilled scorers rapidly catching up to him. Sebastian Collberg, Tim Bozon and Charles Hudon will almost certainly find themselves in Hamilton for the 2014-15 season. The next two seasons, if not less could, define his fortunes with the Canadiens if he cannot be a leading player in Hamilton and earn NHL time when, inevitably, injuries strike the lineup.

The best ceiling one can likely attach to Leblanc right now is a 3rd line two-way winger with scoring ability. Without a sudden leap forward in any of his offensive tools, he does not appear to have the talent to become a top-6 contributor for the Canadiens or a strong NHL team at the present time without such a leap.

As noted by my vote, there is no one on the list I'd value more than Leblanc as he is relatively close to the NHL and could be a contributing member this season given the right circumstances. If I had to consider players with the skill set to move over him given time, I would have to give respect to Artturi Lehkonen, Tim Bozon and his top competition in Hamilton, Christian Thomas.