One of the many bounties found in the 2012 NHL Draft for the Canadiens, the Kamloops Blazers winger continues to increase his profile in the Habs organization. In this edition of the Top 25 Under 25, he comes in seven spots higher than in his debut as we examine his progress.

Tim Bozon just misses the Top 10 in this edition of the Top 25 under 25, making a 7-spot improvement over his initial position in 2012, owing to an excellent post-draft season in the WHL.

The acquisition of Bozon was great fortune for the Canadiens at the 2013 NHL Draft. Ranked as being good enough to go early in the 2nd round, the Canadiens managed to land the 36-goal, point-per-game left winger in the 3rd round at 64th overall, which allowed them to continue a fantastic run of acquiring scoring talent in 2012. He also will quiet the critics who are all too often critical of size, standing at 6'1" and while not a power forward, it is not a height that anyone can readily scoff at.

He is the 2nd member of the Canadiens 2012 Draft Class to grace the Top 25 under 25 this year and considering there are still 3 more ranked members of that class to go, it gives you an idea of how highly the EOTP staff regards the 2012 crop. 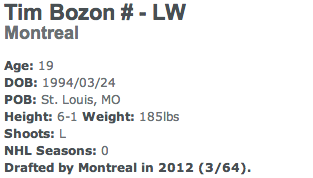 As you can see, Bozon was one of the least controversial votes among the staff. Only two people considered him outside of the Top 15, two considered him Top-10 material while the rest of us voted him essentially within the same range. Bruce clearly sees the most potential in Bozon, while Chris seems to be guarded about his potential upside. Being a bit of a dork about numbers, I'm feeling smug that my vote lines up with his placing in this year's Top 25. I think Bozon's placement is credit to his consistency and his potential, he's not a brilliant prospect but he offers a lot of very good tools for anyone to like. 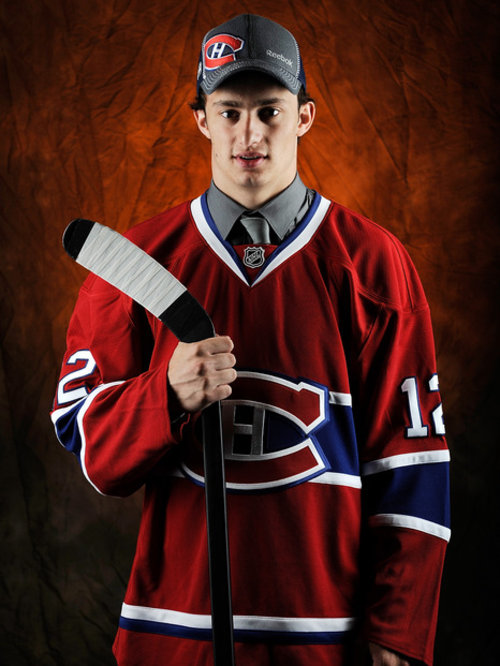 There is a lot to like about a prospect that seems to be good at everything. For two straight seasons, Bozon has lit the lamp 36 times and displayed a solid aptitude for goal scoring. His playmaking seems to have taken a step forward over his rookie WHL season, as he marked 20 more assists in the 2012-13 season which helped raise him to 9th overall in scoring in the WHL. Bozon's scoring abilities are not the limit of his talents either, displaying a good skating stride, solid on-ice vision and respectable defence. Bozon also has a solid 6'1" frame that he does not mind using, while not a forceful checker, he will engage physically to get things done.

While Bozon is good at everything, he does not truly excel in any particular part of the game. While it seems silly to complain about a player having solid across-the-board ability, sometimes to break through to the NHL, a player needs a standout skill to help him gain an edge. There could also be issues for Bozon if some of his skills were to plateau early, as he would have no standout ability to help him compensate.

There will not be any question about where Tim Bozon will be playing this season. While a solid prospect, he is a ways away from making an NHL debut. He has another junior year to fill out before he is eligible to play in the AHL so he is set to return to the Kamloops Blazers. With the Blazers losing several of their veterans to the professional ranks, Bozon could be expected to rise up as the team MVP in the 2013-14 season. This is also a good challenge for Bozon as he can step forward and establish himself as one of the elites of the WHL. You may think 9th in points last year makes him elite, but while he had a great 2012-13 season, one can always look back and note the strong team around him. This year, it will be much more on him to make a name for himself.

Looking further ahead, I would not expect Bozon to become an overnight sensation like Brendan Gallagher did, effortless stepping into an NHL role after a half-season in the AHL but as long as he maintains a slow and steady progression, there is a lot to look forward to. Given time, Bozon will potentially begin challenging for an NHL spot in the 2015-16 or 2016-17 seasons, working under reasonable projections.

I'm a big fan of Bozon and aside from perhaps Arturri Lekhonen, I would not consider anyone coming before him in this year's rankings to be his match or his superior.