Bournival was one of the main AHL rookie forwards in Hamilton in 2012-13 after a strong CHL career. He's fast, smart and hard working, but does that add up to an NHL career of any significance?

Michael Bournival came into the Canadiens system in 2010 when P.K. Subban decisively took the third pairing right defenseman job away from Ryan O'Byrne, prompting a trade for the Avalanche's third round pick from that summer's draft. Bournival is the third ranked prospect from the 2010 draft in our top 25 under 25, ahead of Morgan Ellis, Patrick Holland and Mark MacMillan (who didn't make the top 25) of those still in the Canadiens system.

At EOTP, we've been strangely consistent on our Bournival rankings, taking 12th spot this year and all previous summers. In 2012 he was between Morgan Ellis and Yannick Weber in the rankings, and it was hoped he'd build on his Memorial Cup winning final junior season by proving himself against men. In 2011, he was seen as potentially being on the same level as Louis Leblanc as a junior player and Andrew in particular thought he was deserving of more attention as a prospect.

At first glance, Bournival's rookie pro game campaign looks awfully disappointing. Less than half a point per game at the AHL level is generally not the sign of a prospect with any kind of NHL future. However, allowances must be made for the epic failure that was the 2012-13 Hamilton Bulldogs. Brendan Gallagher is already a top six talent in the NHL and has a good chance of being a future top line winger and he scored only 20 points in 36 games. The collective EOTP brain trust is also willing to forgive Louis Leblanc for scoring like Phillipe Lefebvre last season, so the player that clocked in at fifth-best among the Bulldogs' regular forwards for points per game (between Palushaj and Blunden) shouldn't be disqualified.

On the other hand, Bournival isn't like Gallagher/Beaulieu/Tinordi in how impressed you could get by watching him play. When Gallagher and Beaulieu were on the ice by my viewings, they appeared to be the only players with any real offensive ability but were unfortunately undone by the ineptitude of their teammates. I wouldn't argue the same for Michael.

Bournival occupies a strange place in the voting. His average vote number is 16, but he makes 12th on the overall ranking list. As a result, only three voters thought he deserved a ranking higher than he got, while the other nine all would say they like somebody better for his spot. The writing draw was particularly interesting in this case because it fell to the voter with the lowest relative opinion of him to tell you about all things Bournival. 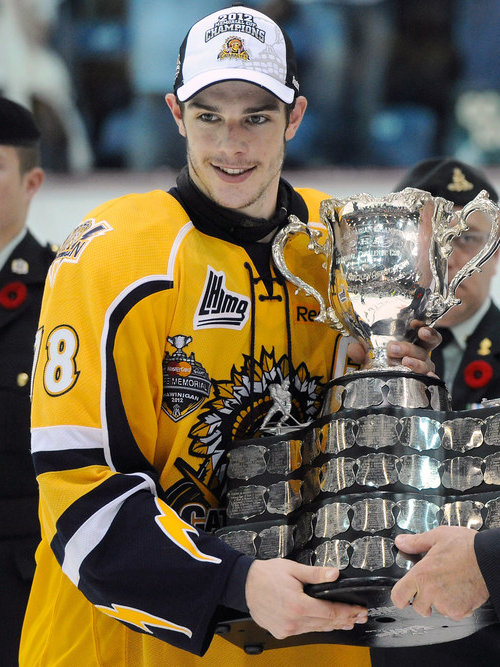 Bournival has solid defensive skills, combining good speed, hockey sense and grit/determination to make for a player with the potential to be a plus defensive forward in the NHL at center or left wing. While he isn't a big bruiser, he does project to have NHL size and strength by the time he is ready to make the jump to the big league. Bournival sports a respectable amount of offensive ability if he's being considered as a bottom-six type prospect, and is a threat to score when short-handed based on his ability to steal the puck and carry it down rink. On a bad team, Bournival's shot rate (2.2 per game) was respectable, which suggests a he may have a modicum of ability at goal scoring in the future.

Bournival does not appear to project to have any plus offensive tools at the NHL level. Neither his shooting nor passing skills are notable, nor is he particularly good at grinding out goals down low. He also does not appear to have particularly good offensive instincts at the professional level. Bournival also struggled to control play at the AHL level as a 20-year-old.

Best case for Bournival is probably as a two-way top nine forward; it is extremely doubtful his offensive game takes him higher than 5th-7th best on even a weak NHL forward depth chart. A new Chris Higgins is the highest I'd be prepared to project him, which explains why Laura thinks he's good for eighth on the list.

Overall, I would say that if Bournival turns out as well as Tom Pyatt did, we shouldn't be too disappointed. He does seem reasonably likely to be a 3rd to 4th line left wing/center in the National Hockey League.

By my voting record you can see that I'd have taken a number of previously ranked players ahead of Bournival; would you?