Is Lehkonen the next in a series of value picks for the Canadiens at the NHL draft, or was his slide down the draft board cause for concern?

Finland's Artturi Lehkonen was the fourth player chosen by the Canadiens in the 2013 NHL draft, but he clocks in as the top-rated in our countdown, and may well end up as the best of the bunch. While I wasn't as big on Michael McCarron, Jacob De La Rose, and Zachary Fucale prior to this year's draft, I had this undersized winger ranked 25th overall. Lehkonen had a very impressive season playing with not just KalPa Kuopio of the SM-Liiga, but also with Finland at the World Junior Championships and the U-18s.

As can often be expected with new draftees, there was a wide discrepancy in the voting on Lehkonen. While three voters had the 55th overall pick outside their top-25s, seven decided he was worthy of a top-15 ranking. 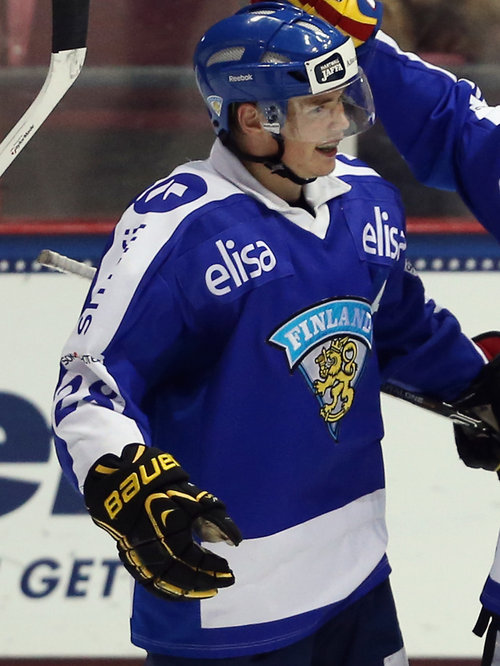 Lehkonen is a pure goal-scorer, but he's also an exciting all-around offensive talent. While his accurate and explosive wrist shot is likely his best feature, he also possesses solid skating (his edge work allows him to be elusive in getting by defenders in one-on-one situations), good puck skills, and elite hockey sense. He uses these traits to make up for his weaknesses - which I will get to next - and he's been having success at this while playing with men in the third-strongest professional league in Europe for a year and a half.

More impressive than individual traits, perhaps, are the numbers he's put up compared to his peers. Copper N' Blue, our Edmonton Oilers affiliate, put together a look at comparables for top the-30 draft eligible players of 2013, and the list for Lehkonen was particularly intriguing considering his output approached heralded second-overall pick Aleksander Barkov. Here, Lehkonen's numbers are posted against every first round pick taken out of the SM-Liiga in the last 30 drafts.

Lehkonen was chosen 55th, while his numbers place him amongst peers who went no later than 18th - that being none other than Chicago Blackhawks prospect Teuvo Teravainen, whom the Canadiens were high on, and who was a top-5 player on many draft boards. Lehkonen and Teravainen also tore in up playing together at Finland's World Junior camp this month.

What's also notable about the Canadiens draft pick's great season is that his point and goal totals seem sustainable. His 7.3% Fenwick shooting percentage ranked him 48th out of the 116 players in the league with at least 100 unblocked shot attempts (or positive Fenwick events), and overall he ranked 46th in positive Fenwick events. Barkov, in contrast, got almost four minutes more ice-time per game, shot significantly less, but also scored more. It's hard to say how much of that was talent and how much was "luck"-driven, but having seen Lehkonen's shot it's not out of the question that even without maturing as a player he could see even better numbers in the year to come.

There are two major factors that likely pushed Lehkonen down some draft boards. The first is size. Lehkonen at last count is only 5'10", 163 pounds, which is significantly undersized, even for a winger. It's not uncommon, however, for players to weigh in that range at 17 years of age - there is still time to bulk up - and considering he doesn't tend to shy away from the dirty areas, and in fact scores a decent percentage of his goals from the crease, I doubt it will be a major issue in his progression towards the NHL.

The bigger issue is his health. Lehkonen suffered two concussions in 2012-2013, the second of which was the result of a dirty hit from Jarkko Ruutu. Though neither caused him to miss many games, there is always the risk of re-injury. Concussions can be a slippery slope, and though injuries are a risk for any prospect, somebody who has already suffered two by the time he's 18 is just one wrong hit away from a career put in jeopardy. That was the biggest reason I didn't rate Lehkonen any higher than 14, although I was tempted to, and may have been a reason for his slide in the draft.

Lehkonen is going to play next season in the SML, but after that it's quite possible he comes to North America and begins pushing for a spot with the Canadiens. It would be optimistic to say he could make the team in 2014, but I would say that fans should expect him to become a relevant piece of the puzzle by 2015-2016. If he can stay healthy and bulk up, there is no reason why he can't be a top-6 goal-scoring forward in the NHL, something teams can always use and something that makes him a very valuable commodity.

As we continue to rank these players, we continue to ask you for your say. Is there anybody below #13 that you would trade for Artturi Lehkonen? Who would be your top-ranked player from the 2013 Canadiens draft class?