The Habs first round pick in this year's entry draft makes his top 25 debut in the 14 spot, cracking the top 15 in his first year of eligibility. The hulking American forward surely helps in the size and toughness department, but is there anything more to his game?

When Trevor Timmins stepped to the podium this year, spoke some of his excellent french, and said the name Michael McCarron, I think the collective reaction of Habs fans was probably the same as mine: WHO!? I had my heart set on Valentin Zykov, and was sure Timmins would grab him, so I couldn't figure out why he name dropped someone I'd never even heard of. I think I said the word why about 30 times, then I saw McCarron walking up to the podium, and I knew why...

McCarron is massive, billed at 6'5" weighing roughly 230 pounds, and he's only 18 years old, so he could still add muscle and get even bigger. I say roughly for the weight because on all the scouting sites I've visited, he's billed anywhere from 224 to 235. In any case, he's a pretty big boy and that's not hard to see. It also doesn't take a genius to figure out that this pick was about getting bigger and tougher up front, and McCarron provides that in earnest.

I had him ten spots lower than he is on this year's list, ranking him at 24. Having now looked into him a bit more I think I could amend that to move him up a few spots, but he still wouldn't crack my top 20. The issue for me is that there are far too many unknowns with this guy. If certain areas of his game improve, he could be a fantastic addition to the team because of his size. If he doesn't improve in those same areas, he'll probably never be anything more than a face-puncher; not the type of player you'd use a first round pick on.

Now, if I know anything about Trevor Timmins, he has a propensity to surprise everyone by drafting guys who come with low expectations, only for them to wind up being awesome. While I have low expectations for a Coke-Machine like McCarron, he has some excellent upside. If he continues his trend of improvement in areas more important than pugilism, he could be a huge addition to the Canadiens roster in the future.

Voting was pretty split on McCarron, as you can see below. Most had him near the middle of the pack, with Marc and Justin both giving him spots in their top 10. 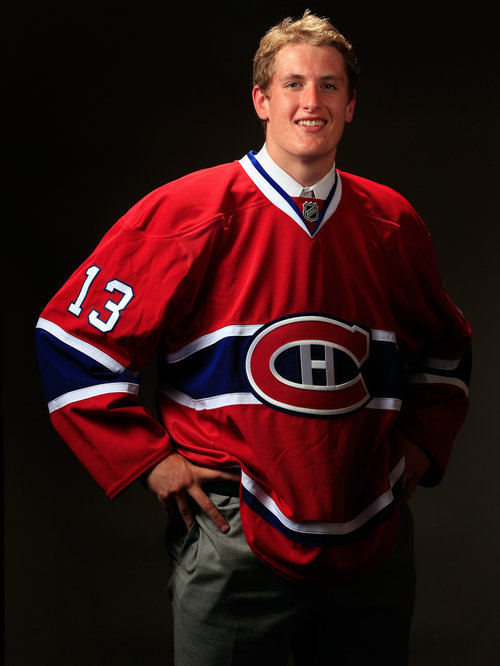 McCarron's biggest strength is the one thing you can't teach; size. He's huge, and very strong, which coupled with some acquired skills can make for one heck of a hockey player. When you consider this as his biggest asset, you can imagine he would be quite the presence in front of the net and battling along the walls and in the corners. At the recent World Junior evaluation camp, that's precisely what he drew praise for. He's very strong on the puck and wins nearly every battle for it, which is definitely a big plus as he could be a major possession driver with those attributes.

He's been said to have much softer hands and better puck handling than you would expect for someone his size, and has also drew some praise for his ability to find teammates with his vision. He has a decent shot and has shown some flashes of offensive talent, but is by no means an elite level shooter or scorer. The good news is that there seems to be a consensus among scouts that he has made major improvements in his offensive game over the years. That said, he seems eager to learn and could develop nicely if this trend continues.

Scroll to about 34 seconds in the video below and you'll see that he can be a nice piece on the powerplay too. In the video, he gets the puck at the point, sees that he has no shooting lane, so he gives up the puck and heads straight for the net, where he knows his big body is of good use. This shows good awareness and tells me he could be a good asset for the Habs special teams in the future.

My biggest issue is his skating. Most reports have noted improvement over the last few years, but from what I've seen he's average at best. The problem there is pretty obvious; the NHL is a fast paced league and if he can't make strides to become a better skater, he'll definitely struggle at even the AHL level. The last thing I want to see is him becoming nothing more than an enforcer.

He is also a bit careless with the physical aspect of his game, often looking for big hits that can put him out of position and lead to unnecessary penalties. He also takes penalties for other things that he doesn't need to do, so it seems there is a bit of a discipline issue with him. He can also make some careless decisions with the puck, sometimes making ill-advised passes that lead to odd man rushes. Basically, he needs to work on his decision making, with and without the puck, if he's to become a solid NHL player. He'll undoubtedly be a stellar face-puncher in the show, but he has the ability to be more if he works on skating, discipline and decision making.

Having recently decided to go the OHL route over NCAA, he'll be playing this year with the London Knights, which could be good or bad depending on how he's used. It's been discussed at length on this site, that if Dale Hunter sticks him into a goon role, he won't be able to develop as much in terms of skill. I don't think Trevor Timmins and Marc Bergevin used a first round pick to select someone that they see as an enforcer alone, so I'm hoping the coaching staff in London don't see him as that either. He's definitely going to be doing some fighting, but I have to hope he keeps that to a minimum and works on other areas of his game.

As mentioned, he needs to work on discipline, skating and decision making. The fortunate thing is that I believe these are all things that can be improved vastly given the right coaching. As mentioned, he has shown improvement in some of those areas, but there is still work to be done. He has the natural physical ability to play in the NHL, but the question is what kind of role he'll be able to fill.

I'm hesitant to project him any higher than a third line power forward. He could probably be used heavily on special teams as well. In reality, I'm inclined to think he'll actually be a fourth line player. The thing is that McCarron is a boom or bust prospect. There's a very high chance that he'll be nothing more than that fourth line player, however if things come together in the right way, he has the physical tools to be able to be a bigger, stronger, faster version of Milan Lucic.

If you've been reading the series, you know the deal. We're asking people to tell us whether you would move the featured player for someone below him on the list. I might get slammed for this, but I'd seriously consider moving McCarron for Sven Andrighetto, who just missed the cut for this year's list. But now, it's the readers' turn; would you move McCarron for someone below him like Magnus Nygren or Morgan Ellis?